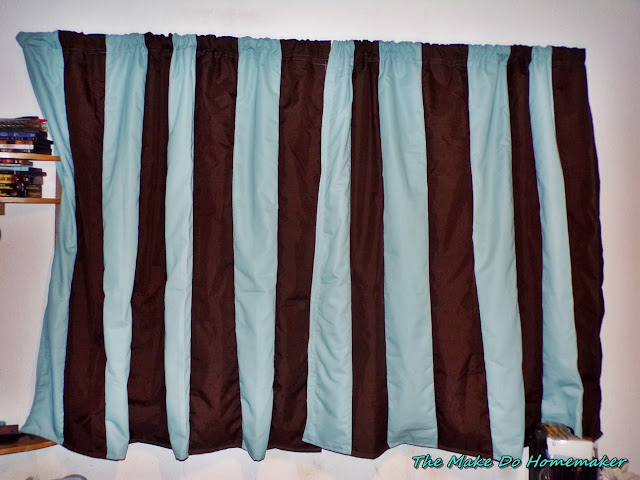 The last two weeks have been kind of rough.  Where before Alvah had given up sleeping for the last couple of months on anything resembling a regular sleep schedule, the last couple of weeks he just out and out gave up sleeping.  And he was not happy about it.  It was not a fun time for me, I'll be very honest.  Combine that with the 10 year anniversary of my dad passing away and somehow, depression took me out at the knees a bit.

Luckily the last three days or so Alvah has actually started sleeping better (not GREAT, but better) which has helped me tremendously.  Surprisingly, however, even with a major lack of sleep (thank you coffee!), I was able to get a bunch of stuff done around the house.

First, I managed to finally dig my sewing table out from underneath the major pile of stuff that had accumulated on top of it and around it.  I planned ahead for everything I had ordered from Amazon to pad out my pantry and household and was able to immediately put everything away as soon as it came in, so I didn't have to add to the household clutter (yay!).  I am happy to report we are well stocked on paper towels and toilet paper now for the coming year, which is a relief, I have to say.

Anyway, once I got my sewing table to a point I could use it again, I'm slowly working through the major pile of projects that have piled up.

1.  First, I decided that I needed to make new curtains for my bedroom as the old ones were kind of getting a bit ratty.  I had bought two different colors of curtains at the used stores a few years ago, figuring that I was set for when I repainted the room that way and I could figure out which color went with the paint better.  Well, when I pulled out the curtain panels to try them out, it turned out that the used store had screwed up the length and width on the panels when they labeled them so I had VERY long and not very wide curtain panels in blue and brown.  I, at first, thought that I'd maybe just buy some curtains from Amazon and call it good, but then my check card got frauded (I am not linking my check card to my Amazon account anymore after this as I have had fraud on it at least once a year for the past three years and it is the ONLY place online I use my check card), so I quickly cancelled all open orders so they didn't roll over onto my existing Amazon card balance (which I'm working on paying off).  So, necessity being the mother of invention, I made a decision and called my step mom who had studied textiles and sewing when she was in college.  I asked her opinion on stripe width and such and with her suggestions in mind, I started to cut panels down and got to work.

The final results are seen up top.  At the moment the curtains match pretty much nothing in the room as I haven't painted the room yet (obviously), but the brown will definitely match the new light fixture we bought for the room, so at least I have that going for me *laugh*.  I used the old curtains to line the new ones as they did need some type of lining and I have to say it works pretty well and blocks light and breezes decently well now. 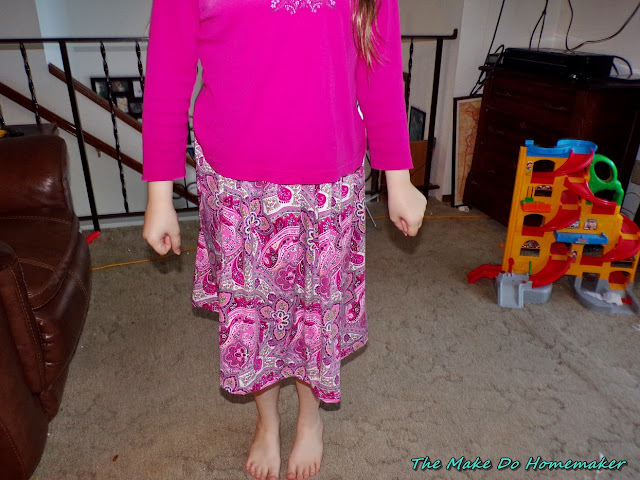 2.  I also managed to FINALLY, after a few years of determined not getting it done, got some skirts made for my daughter.  She insists on living in skirts when she is in the house and just plain won't wear pants when home and her old skirts were not only getting shorter and shorter on her but they were plain starting to wear out. 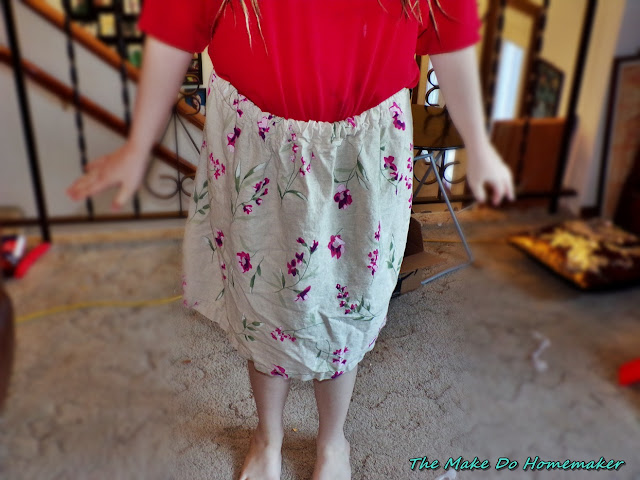 So far I've gotten two done and have one more cut out (the material is the same as the beige with the flowers on it, but I wanted to make sure the material would wash and dry okay before sewing the second one).

3.  I mended two shirts, a pair of pants and a few socks.

4.  I needed one more "s" hook for my pot rack above my sink so I could hang up a new fish shaped pancake pan that Alvah had insisted on getting me for Christmas (I was really touched he wanted to get me anything, honestly, so I was thrilled to get it :).  My husband managed to find one in his store of things in the garage and saved me having to go to the hardware store to buy one.

5.  I filed our taxes for the year, so now we wait for the IRS to start accepting returns and such in the middle of February.

6.  My husband cut the ceiling out of the master bathroom to try and figure out where the water was coming from that created the hole in the ceiling.  He found a sewer gas vent pipe was leaking water somehow and didn't have the proper fittings on it, so we went and got the parts for him to fix it over the weekend.  I'm hoping we don't have some bigger problem we have to worry about and just have to replace a section of pipe and a fitting and then figure out how to fix the hole in the ceiling and match the texture, which will be challenging enough. 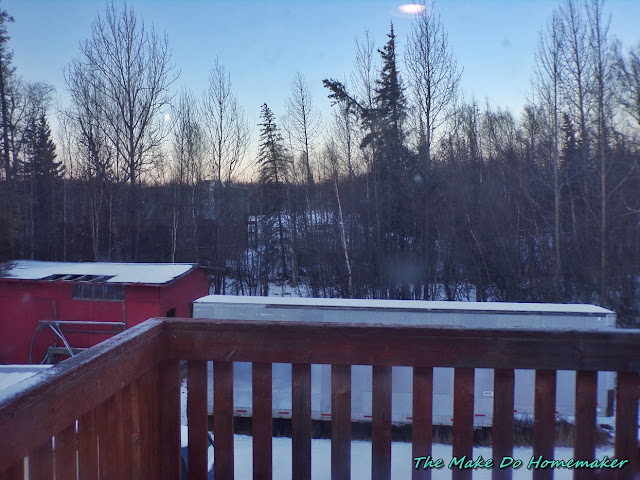 7.  The wind started blowing brutally today and I heard a crack.  I looked out my window to the above sight.  I'm hoping that the tree won't come down on the barn or our storage van, but we shall see I suppose.  My husband was going to try and cut it when he got home from work, but the wind is blowing so bad I told him not to try it as I don't want him in the hospital.  Hopefully it comes down with minimum damage to things.  Fingers crossed.

8.  I wanted to make beef and barley soup one day to use up some of our stew meat in the freezer, but found that the stew meat was really tough cuts of meat.  So, I made basically a beef bourgignon with the stew meat (simmering it for long periods of time in red wine) and added some barley at the end of cooking (I have quick cooking barley at the moment).  It really helped to tenderize the meat and ended up being really tasty!

9.  The store finally had my preferred brand of coffee in stock!  So, I was able to get bigger cans of coffee for less money than a smaller can would have cost me having to buy them from Amazon.  I was really happy to find that, I have to say as I like to give local businesses my money when I can.

10.  Speaking of Amazon, I had gotten a box of "Tropical Green Tea" as part of my Christmas gifts (if you search for it on Amazon, it pops up as Harvey and Sons is like the ones that make it and they are about it).  It is a green tea with a pineapple aspect to it.  I have found that it makes the most awesome iced tea and I actually took some Amazon credit I had from an order that had gotten screwed up with Amazon (which seemed to be a huge continuing trend over the past couple of months) to order myself three more boxes.  I had searched for it locally in vain, so finally decided to bite the bullet and order it from Amazon (I'm trying to avoid ordering from them right now as they had messed up so many orders and things of late, let alone just trying to save money).  I, obviously, really like the tea and it was nice getting three boxes for free once the credit was applied (which honestly after the whole check card thing, was the only way I was going to order from them).  Here's hoping they come in with the proper number and in one piece (fingers crossed).

11.  I made home made bread and other items so we didn't have to go to the store and get some, which definitely saved us money.

And there you go folks.  Not a huge list, but I'm happy with it anyway.  Just getting some of my sewing projects off of my list makes me happy.

How about you?  Been up to anything of late?