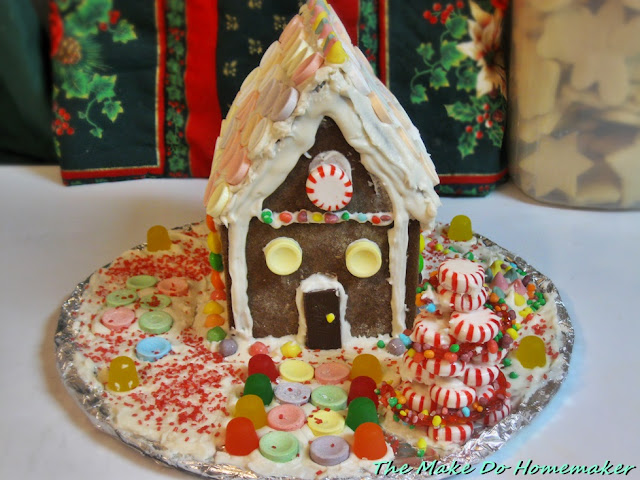 It's Christmas crunch time for pretty much everyone, and I'm no different right now.  Unfortunately, in the middle of "Christmas baking mayhem and present making mania" is, of course, when my son finally comes down with the "plague cold" that is going around the kid's school like mad.  So, in the middle of everything else I'm taking care of a sick kiddo.  It seems like every single year we have to be sick through at least one of the major holidays.  I'm praying that the rest of us don't catch the full fledged cold and that Alvah is well by Christmas.  Here's hoping.

This week will be full of me trying desperately trying to get Christmas gifts made the rest of the way, getting the rest of my Christmas baking done and just trying to have a good time this holiday season.

So, let's get to the money saving things that happened this week!

1.  Back when the kids were little, I used to buy gingerbread house kits and we'd decorate them for Christmas.  Now with the peanut allergy...well we haven't a gingerbread house in years because all of the ready made kits are contaminated with peanuts and I just plain didn't have time to make gingerbread houses from scratch (and honestly I'd never made a gingerbread house on my own before, the last time I'd made one was when I was a kid, and I was more than a little intimidated at the prospect).

This was definitely a money saver as there is one bakery that makes allergy friendly gingerbread house kits and they are tremendously expensive, shipping to Alaska would cost goodness KNOWS how much and the houses were tiny (at least by the pictures) when assembled.  So, making our own was definitely more cost effective :).

5.00 worth of son-safe candy from Fred Meyer on sale this week and a total spontaneous purchase of some Hillshire Farms mini mint candies that were actually made in a certified peanut free facility (I LOVE that type of mint and haven't had them in years...between that and finding Andes mints were peanut free...my life is now complete *laugh*) and we were on our way.  We supplemented with safe candy that was left over from trick or treating that my daughter didn't care for (like she doesn't like Dots and other gum drop types of candy so I knew those would come in handy later), candy we had around the house (like the mini Sweet Tarts and Andes mints).  I made a recipe for an actual gingerbread house from an old cookbook (it did come out darker as I didn't have light molasses though) and I put together a basic house form after rolling out the dough.  There were some, ahem, gaps and mistakes when I lined everything up after baking (why don't things ever bake completely straight and level?  *Laugh*), but I did manage to put it all together.  I found a recipe online for royal frosting and I mixed it up and found it to be WAY too thin to be used as any type of building material, so I kept adding powdered sugar until the icing would hold up a spoon that was stuck into it.  It worked after that *laugh*.

A shot of our finished house is seen up top.  I think it turned out really cute!  And completely edible by all members of the household!  Even Alvah helped to put the candy on...and then ate a bunch of mini Sweet Tarts and a bunch of the Andes mints (leftover from last Christmas that I've been hoarding...err...saving).  I was really proud of him for that and I think he had fun right along with Armina and I :).

2.  Shopping went well this week for the most part.  I did get a bit more than I normally would as I really want to avoid going to the stores as much as possible this coming week as they are not only going to be crowded, but I just plain want to stay home and make gifts (and I might be stuck home anyway taking care of the sick kiddo).  The best score this week on the shopping front was using a loaded coupon on my card for 2.00/1 Oreos (one of the son's favorite treats) and I had an additional coupon for if you buy one Oreo you get a free cream cheese coupon (don't ask me why cream cheese with Oreos because I am at a loss), so I was able to get my son a thing of Oreos for his class Christmas party later this week for 1.99 and got a free block of cream cheese while I was at it.  Past that it was the usual things for shopping, boy food and such. I did walk away from things that were good deals, but that we didn't really NEED, thus saving us money as well.

3.  I tried to combine errand running into one day if possible, and did OKAY in that regard, although the son went on a "I'm not sleeping" spree this last week and the 1 1/2 hours of sleep really did me in on shopping day and I ended up running back to the store three times because I kept forgetting things we needed.  Not frugal, not fun, and definitely frustrating.  Thank goodness I managed to get a few naps in here andt here and the son started sleeping through the night again the last part of the week.

4.  I mended a skirt of the daughter's a dress of Barbie's and a t-shirt of the son's this week.

5.  I made Christmas gifts from materials I had on hand for the kids and husband (more on that later with the Christmas posts).

6.  I listened to a lot of Christmas music this last week, stayed off of the internet a lot and found myself in a lot better mood because of it.

7.  My daughter used to have Christmas lights hung in her room all year when she was really into "Fancy Nancy", but she decided she was too old for the lights in her room this Christmas, so I took the box of new Christmas lights that I had bought last year on Christmas clearance for her  (her old lights had lost one of the colors in the strand and were really old so you couldn't replace the lightbulbs in them) and hung them up in the living room.  It's helping to counteract the really terrible light we have in the living room, which is coming in handy when trying to do embroidery sitting there.

8.  I turned off lights and turned down the heat as much as I could this last week to try and lower the utility bills.  When baking I made sure to the turn down the heat as the oven really starts to heat the upstairs when you bake for any length of time.

And yeah, I think I'll leave it at that for the week as I still have a bunch of things to do before bed and it's seven already.

How about you?  How did your week go on the frugal front?
Posted by Erika, "The Make Do Homemaker" at 8:17 PM