Christmas 2017 Gift Seven and Eight: A Sensory Cube and an Apron 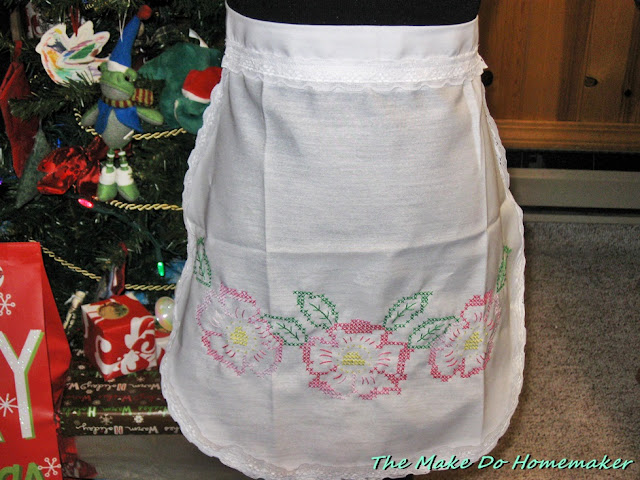 Since I wasn't feeling good last night and didn't get to posting up yesterday's gift post, you get a double post today.  Hopefully I feel better today as I have gifts to finish, cookies to decorate with the kids and other stuff to do and make.

So, first up on the gift list today is a "girly apron" for the daughter.

This was made from a kit my step-mom sent me.  I have no idea how old the kit was but the colored floss it came with was VERY seventies for the colors.  Avocado green for the leaves, fuchsia so bright it would blind you and goldenrod yellow finished up the color choices.  Since the entire project called for those colors only, I immediately threw the floss into my embroidery floss stash and then pulled out other colors from my stores to replace them.  I used a variegated pink embroidery floss for the roses, a nice light yellow for the centers and a prettier green for the leaves. 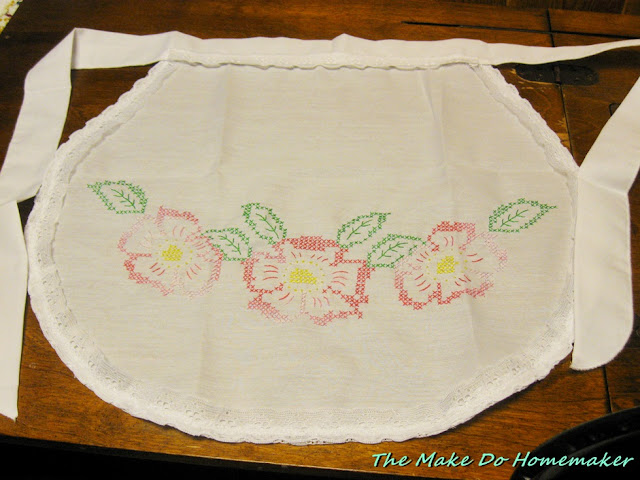 When it came to constructing the apron, the apron came with the tie already finished and you just had to sew it on and the original instructions called for you to gather the lace they had provided and then sew it into the apron.  Unfortunately they didn't give you enough cloth on the apron to do French seams and the apron was already fraying around the edges, so I knew putting it together on the cheap was just going to lead to tears.  So, I put the lace to better use than super frilly gathers.  I took one length and sewed it around the outside edge of the apron, folding it over the edge and sewing it in place with a zig zag stitch, basically making bias tape out of it to secure the edge.  I then took another length of the lace and sewed it around the edge like the directions called for, but I just didn't super gather it or anything (and the lace "bias tape" I'd made, if it shows through the lace you can't tell as it blends in with the lace).

I then sewed on the tie piece, which, once again, the directions just called for you to sew it on, but didn't bother to do anything for potential fraying of the material.  So, I sewed the tie onto the front of the apron with a double stacked layer of zig zag stitch, making sure to trap the edge of the material under one of the zig zag stitch layers to prevent it from fraying later. I then covered up the zig zag stitches on the front with the last piece of lace.  It didn't QUITE reach, but it was really close so I think it'll work fine.

I made the daughter a nice pink camo apron years ago, but she doesn't like it because she's against all things hunting related (she keeps telling us that those are "boy" activities...where she gets this stuff I have no idea because it sure isn't from her family), so I'm thinking this one might blow over better (although the other one was more practical since it was a full sized apron *laugh*). 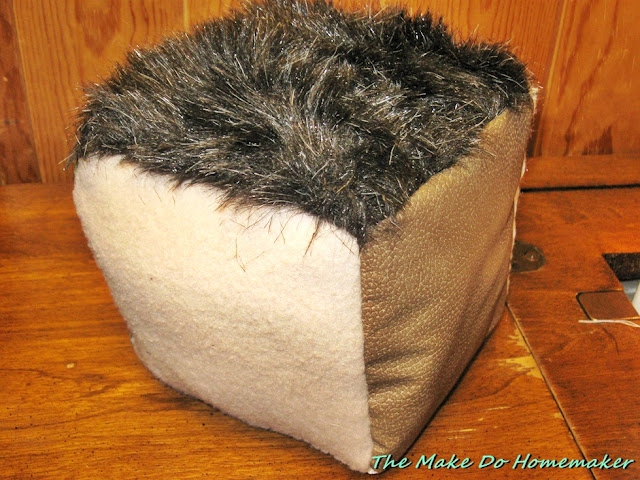 Next up is the ever present sensory cube for the son.  I started making him these a few years ago and he LOVES them, so I'm making sure to make him one every year now.

I did a five inch cube (cut out six inch cubes for each side and use a 1/2 inch seam allowance).  For the fabrics I did a fake fur, a fake lambswool, fleece, fake leather, aida cloth (for a "rough" texture), and a green satiny fabric.  I then, when stuffing it, put two small plastic bags inside.  One bag was stiffer and then the other one was one of those plastics that crinkle if you so much as look at it wrong and made a higher pitch crinkly sound.  This one was an easy gift to put together, and I know my son will love it, so I was happy with the finished product :).

Total Time to Make Gifts:  The apron took about eight hours between the cross stitch and the construction.  Not a hard project by any means, but still time consuming.  The sensory cube took me about an hour and a half between going through fabric remnants to find the fabric, making a template for the cube pieces out of felt (it sticks to fabric so it's a great choice for things like this that are smaller projects to make your pattern pieces out of), sewing it and stuffing it (which actually stuffing it took the longest).

Total Cost to Make Gifts:  Nothing.  The apron kit was given to me by my step mom and the thread was gifted to me as well.  The cube was made out of fabric remnants that I had around the house from previous projects or from fabric that was gifted to me by others.  The stuffing for the cube was taken from an old pillow (same one I used for the ornaments actually) and the plastic bags I had around as well.
Posted by Erika, "The Make Do Homemaker" at 9:30 AM

Email ThisBlogThis!Share to TwitterShare to FacebookShare to Pinterest
Labels: A Gift a Day