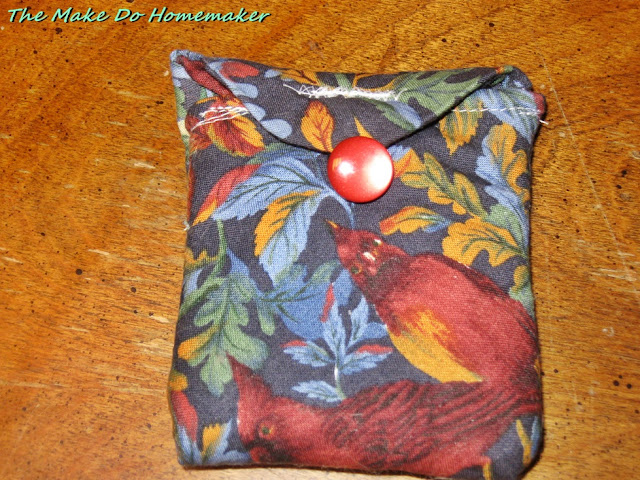 There is actually a mate to this next gift (not a twin as the second one is a bit smaller than the first), but I had to do a bit more tweaking to get the purse looking like I wanted and forgot to take a picture of it before putting it under the tree for myself, so oops there *laugh*.

You see, I made the change purses out of an old tie of my dad's.  My step-mom had mailed the tie in with a bunch of other things in one of her pinata boxes and asked me to keep it and do something with it as the tie was hand made, had belonged to dad and she just couldn't part with it herself by giving it to random strangers, so she sent it to me.  Of course, once she told me all of that, I couldn't part with it either and I kept thinking of something to do with it.  My husband wouldn't wear as loud of a tie as this one was (my dad loved wearing loud ties to work at times...he wore a tie to work every single day for 30+ years so he loved the "shake up" in the monotony of ties), but I didn't want to give it away, so I put it aside and tried to think of something to do with it.

While working on Christmas gifts, I glanced at the tie and realized that it would be really easy to just fold the tie over and use the point on the wide end as a flap and just make a quick change purse out of the widest part of the tie.  So, I did :).  I then took another bit off and made another change purse, but with a rectangular flap instead of a pointed one (as I was getting low on wider fabric pieces at that point) and voila!  Two change purses for my daughter and I to put in our purses, and all the while carrying a little piece of my dad around with us.  I know she will appreciate the sentiment and I sure do as I, even though it's been nearly seven years since he passed away, still miss him every day.

For the "closure" part, I secured some red buttons my step mom gifted me to the change purse itself and then took some old hair elastics that broke apart on me.  I cut a small slit into the upper cloth of the tie and just kind of threaded the elastic down into the inner parts of the tie and then used a zig-zag stitch, going over the hole a few times to make sure that the fabric wasn't going to fray later.  It worked well!

Total Time to Make Gift:  About ten minutes per change purse.  This was a project that went together super quick.

Total Cost to Make Gift:  Nothing as I had all the materials on hand.  I ended up using white thread for the project, even though I would have liked to have the thread match the material better, but it was the strongest thread I had (the tie was thick for one, and for two I wanted to make sure it would stay together well as it could potentially carry a decent amount of weight with change in it).  But, still materials-wise this cost me nothing.  And carrying around a change purse made from an old tie of my dad's and giving a little bit of my dad to my daughter for Christmas?  Priceless :).
Posted by Erika, "The Make Do Homemaker" at 10:43 PM

Email ThisBlogThis!Share to TwitterShare to FacebookShare to Pinterest
Labels: A Gift a Day