Frugal Adventures for the Week 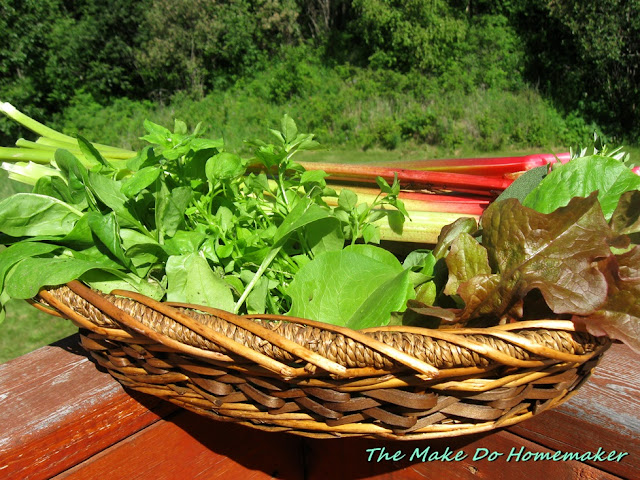 Two days late on posting this so I couldn't bring myself to put "Frugal Friday" as I do have some reverence for our great calendar *laugh*.

I would have posted this Friday, but I had a few cool money saving things that were going to hit yesterday so I figured I'd just wait.  Well, then yesterday hit.  Don't worry, nothing bad, just busy :).  Prepare for a narrative style post at the beginning here *laugh*.

Yesterday, I got up early and immediately got my dishes in the dishwasher and vacuumed as well as I could without moving furniture.  I was preparing to redo the living room layout.  My son has found that he LOVES his rocker recliner, but he found tipping it over constantly was now his favorite hobby.  The recliner was really starting to protest this abuse, my son when he was down on the floor was poking the guard for the back of the fridge (which we want to keep in one piece to keep things out of there) and he was constantly blocking the hallway.  Not cool.

So, my husband helped me move furniture around to a layout that everyone seems okay with.  While moving furniture, of course, I vacuumed underneath everything and such as well, including removing the heating vent cover and vacuuming out the vent. 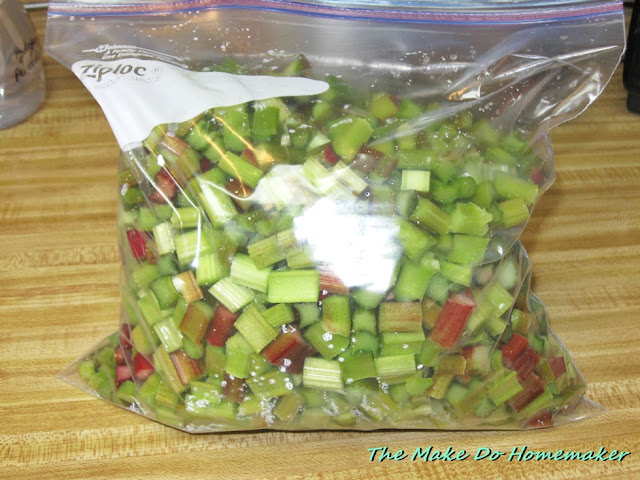 I barely got done speed cleaning the rest of the upstairs and guzzling my coffee and then we were off to Palmer.  I had contacted my friend about her rhubarb as I noticed a lot of rhubarb in the area was going to seed and she confirmed that hers was as well, so I asked if it would be okay to go and harvest it.  She said sure so we ran to do that (I get to go back in the fall to get the roots :).  Thanks again for the rhubarb and the help harvesting it, Davina!

After that we went to Fred Meyer where I picked up some freebies from Freebie Friday that I'd forgotten about and the free doughnut from National Doughnut Day (also an E-Coupon loaded on the card).  My friend, Stephanie, gave me her freebies again as well, so I got those.  I was able to pick up 10 more reduced cans of cat food while I was there.

Then it was off to Bushes and Bunches (after running around to the post office and stuff) as soon as they opened to see what they got in on their truck on Friday and I got some awesome!

I got 20 ears of corn (not cheap, but great quality, so it was worth it) that I need to process today, but... 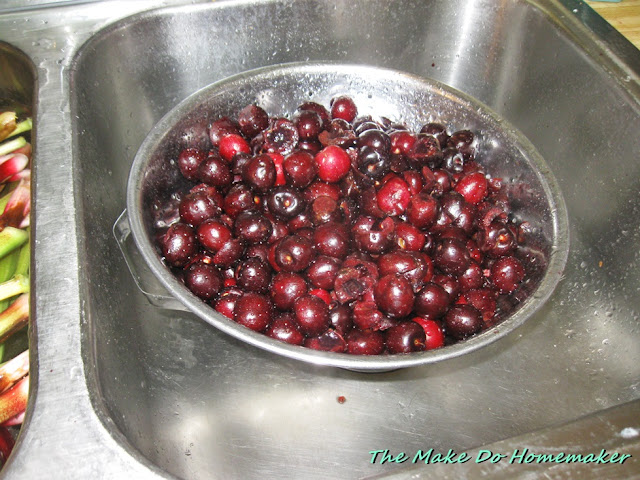 This is 5.00 worth of cherries.  Now, these are normally 5.00 lb around here.  So, this bowl would be impressive enough.  But, then we pan over to the right from the bowl... 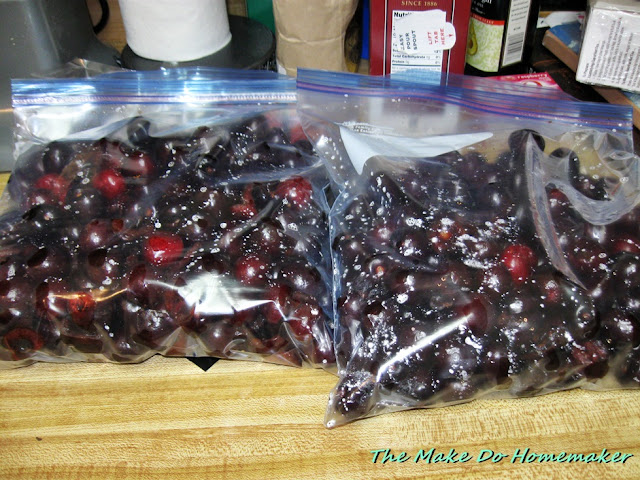 Yeaaaahhhhh!  That's what I'm talking about!!!

They were selling cases of cherries that they said were really moldy and needed to be picked through for 5.00 per case.  I went through with a really discerning eye as if there is one thing my grandfather taught me, when it comes to cherries pretty much the entire cherry has to be moldy to not be good anymore as they are a pretty tough fruit.  Sure enough a  lot of the mold was just on the skins, spread from one cherry that had gone bad, but the mold hadn't penetrated the cherry skins.  I grabbed a case that looked pretty good.  I did have to clean some bad spots and things from the cherries, but I only lost probably about 1/2 lb of cherries total for the entire case (and some of that was pits that I removed if I had to cut a particularly big bad spot off of one of the cherries).

These went immediately into the freezer as they were REALLY ripe.  I texted my friend who had given me free cherries earlier and offered her a bag, but instead she declined and asked where I had gotten the cherries from.  I told her and she went and grabbed 5 cases before the stand closed  for the day.  She got so many cherries that she was able to clean with her daughters that she said we were definitely even *laugh*.

Oddly enough, I tried to send texts to family and friends about the deal and hers was the only one that went through (didn't realize that until this morning when my phone was still trying to send the texts...luckily a reboot found the function had frozen so it didn't completely drain my phone of minutes).  I think God was watching over her there :).

By the way local folks, family and friends, Bushes and Bunches is open on Sundays currently, so you might be able to score cherries today too.

Right, after that we went to the used stores so my husband could have a little fun for Father's Day and he found a couple cool tools.  We then came home and I immediately went about processing tons of rhubarb and cherries for the freezer.

My brother-in-law had called earlier in the week asking if we needed any furniture as he had a bunch that he'd been given when he was working on places.  One of the things he had was a queen bed.  With a headboard.  I immediately said we'd take it as my husband has been talking about trying to build a frame for our queen mattress for a while, but we haven't had the money.  I figured it couldn't hurt to take it.  When we got it home, my husband and I both decided the mattress that came with the frame was thrashed and we'd just use our mattress, but the box spring with a new slat installed by my handy husband was fine to use and actually is really well built.  Within minutes of putting rhubarb and cherries in the freezer, I was downstairs helping to rip apart out Frankenstein system we had going for a bed, cleaning under it well and putting together the new bed.  Then it was a dash across the lawn trying to hold onto my end of the mattress that came with the free set to put into storage until dump day.  Thanks so much for the bed, Jake!  We really appreciate it!

After that and running to Sportsman's Warehouse for some sausage making supplies (we had a gift card my husband got for Father's Day to use towards it) so I could try making a project for my husband (more on that later if it works *laugh*), by the time we got home and I was finally able to sit down my legs were killing me (throb, throb, throb type of hurting) and I was exhausted.  And then I slept in a decent bed last night for the first time in YEARS and it made it all better :).  I can't believe how much of a difference sleeping on a real bed vs. the queen mattress sitting no the double bed set was.  It was wonderful!  And the best part is that I can reach the floor now, so no more hopping in and out of bed at night.  Life is good!

The garden is a bit more depressing.

Bugs are everywhere right now.  I had white fly trying their darndest to wipe out my chard.  Cabbage loopers were eating on everything they could get their grubby little mouths on.  Aphids were attacking my lettuce and anything else they could get on.  I was so depressed and frustrated as I picked them off the plants and dumped them into a glass of vinegar (I know, I'm mean).

Luckily the spinach and cabbages were bolting, so I pulled them (still have a couple of smaller spinach plants growing, though) and then instead of planting new seeds right away I decided to wait till July and start planting my fall garden.  Till then I went and bought a thing of marigolds and planted them in the holes in the garden.  Between them and using the hose to water the plants, the bugs seem to be less in number right now.  Luckily the lettuce is doing good still so far and the middle bed the garlic seems to be repelling bugs as well, so that was an upper anyway.  The peas are growing well, although no flowers yet.  The rat tailed radishes finally was able to develop flowers before they got eaten off after I planted a marigold right by it, so I feel great seeing those flowers everywhere :).

My rhubarb plant at the bottom of the yard was being attacked by caterpillars and slugs, so I harvested it a bit earlier than I wanted and spread a bunch of compost around the remaining stalks to help nurture them and hopefully keep the plant doing okay until I move it in the fall *fingers crossed*.

So, I harvested tons of lettuce, spinach, sage, thyme, rosemary, chives and Chinese cabbages from the garden this week (third harvest of the week is seen above).  I also harvested my rhubarb (which netted me 3 cups of cleaned and chopped rhubarb for the freezer).

And now onto other ways I saved money this week.

1.  I got my gas bill in the mail.  I turned off the heat a lot this month, so our bill was about 1/2 of what it was last month.  Since we have a gas dryer and I use my oven and stove top a lot, this was a nice change of pace.

2.  I got my gift for my niece made this week.  I used materials I had around here to make it, so the total cost to make it was zero (except for my time of course :).

3.  When my husband went to my brother-in-law's to pick up the bed, I dug out and sent him over with a double jogging stroller for them.  My sister-in-law had asked me if I still had it and said that my brother-in-law could use it and I definitely agreed.  I've been trying to give the stroller to someone who could use it for a great while as it's a wonderful stroller, so I was thrilled to be able to get it out of storage and give it to someone who could use it :).

4.  I used home made shower cleaner this week and used vinegar to help clean things as well.

5.  I ate leftovers for lunches this week, and my husband took leftovers to eat for lunch a couple of days as well.  This not only saved us money, but also led to less food waste.

6.  I took advantage of coupons and sales this week to get the most for my money.

7.  My husband repaired several things this week with materials we had around the house.

And there you are folks.  Some of my frugal adventures for this week.  I'm off to process corn.  How did you do this week?
Posted by Erika, "The Make Do Homemaker" at 10:49 AM