Christmas Decorations on the Cheap Part 4: Throw it! 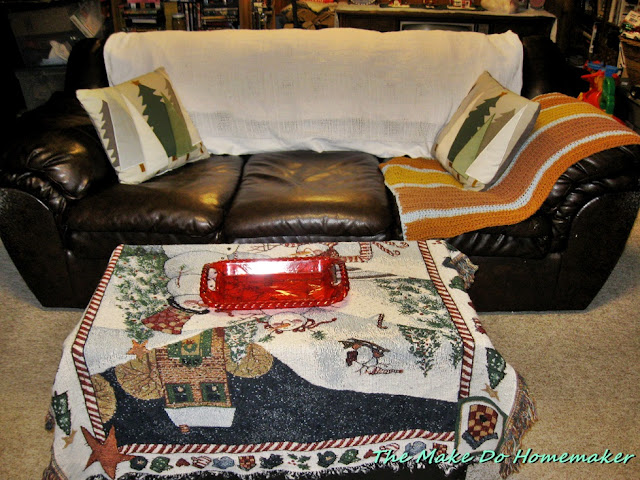 This is a decorating technique ANYONE can do in any type of financial situation, so I thought I'd share it.

This time of the year I go with the adage "throw it" when it comes to decorating for winter/Christmas.  What do I mean?  Use what you have in the way of material, sheets, or throws and just plain throw it over furniture for a festive flair!

This is my couch and trunk/coffee table in my den this year.  Remember the white duvet that I bought at the used store for cheap?  Well, I found it went really nicely with my winter themed throw pillows and so it found a home on the back of my couch.

Side note:  The throw pillows were actually one of the few things I've bought new when it comes to decorating.  I ran into them at Target three years ago, thought they were really nice and would go with a lot of different decorating schemes and bought them on sale (but not clearance or anything like that).  I put them into storage with the rest of my Christmas decorations and pull them out every year.  This is year three for them and they still look brand new doing it this way, so I'm happy.

Anyway, back to the original point.  The throw that I put over the trunk?  Was bought at a yard sale for .50 in the middle of summer three years ago (can't tell I was going through a "gee I need to really redo my Christmas decorating now that we've moved to a new house" can you?).  I originally bought it to throw over maybe a recliner to use as a lap throw, but found it too busy for that.  So, a tablecloth it became.  And I personally think it looks great where it is.  It will remain on the table through most of the winter as it's a winter themed throw vs. a purely Christmas one.  I love using throws as table clothes for coffee tables and such because they are 100% washable, which is ALWAYS a good thing.  The red tray some may remember I got at a local used store earlier in the year and thought it would look cute as a Christmas tray (I like to keep some type of tray on my coffee tables to catch any glasses that might end up in the room.  Helps protect the furniture).

The afghan was a gift from my step mom years ago and has rotated around the house into pretty much every room at one time or another.  Right now it's sitting on the couch in case someone gets cold (and also to cover up the shredding couch cushion that I switched out from upstairs for the photo.  Keeping it real folks!). 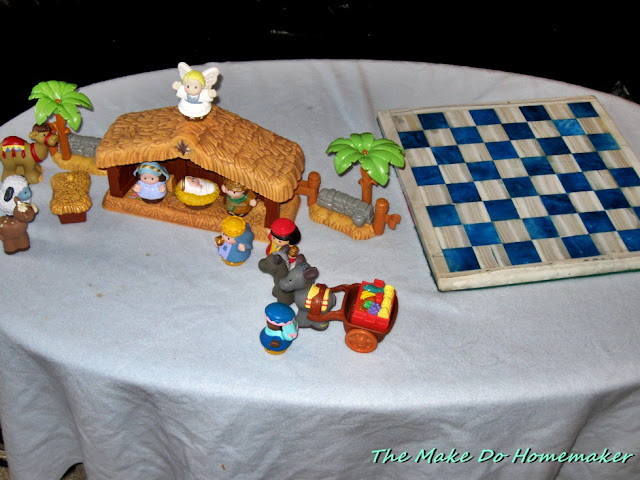 Upstairs in my living room I decided to go lazy and simple when it came to a coffee table topper this year.  This is just a piece of light blue flannel I found at a thrift store years ago and had in storage for a long while.  So, I washed it and just threw it over the table without any sewing or anything.  It looks nice, will stay in good shape through the holiday season and if I find I want to do something with the cloth later I can without being pegged into using it strictly for a tablecloth.  Yup, I'm lazy!

Oh and another side note?  The Little People nativity was purchased on the Christian Family Bookstores site on an after Christmas clearance sale for 14.00 when my kids were little.  This set is awesome, has put up with rough play from my kids and is still going strong 5 years later.  I highly recommend it!

So when it comes to decorating use your imagination.  Do you have a light blue, or maroon, or any "Christmasy" colored sheet you could use to quickly make a furniture cover of for the holidays?  Have any quilts with blue in them or afghans (which I have those over the back of furniture too right now around the house).  Think outside the super expensive store bought "only for the holidays" types of decorations.  You can still make your house look nice and reuse the things you used as soon as the holidays are done!
Posted by Erika, "The Make Do Homemaker" at 12:02 PM