A Gift a Day Gift Thirty One: The Elsa Dress 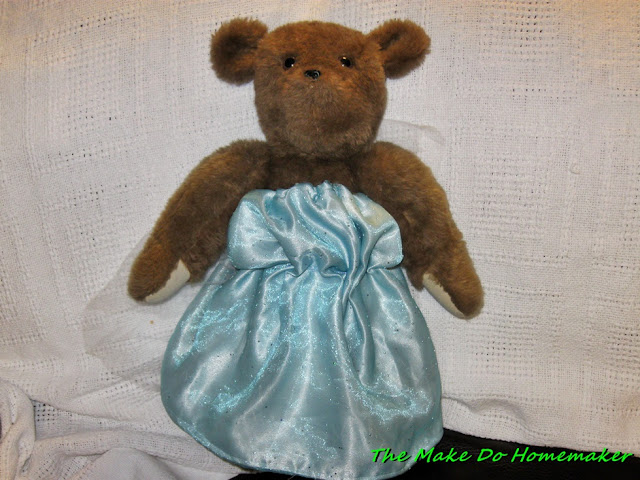 Remember the fancy teddy bear I made for my daughter?  Well, I ran across some fabric I had and remembered that I'd wanted to make my daughter an Elsa (Frozen) like doll but had never gotten around to it.  So, I thought it might be fun to make her an Elsa-like dress for her teddy bear instead.

Boy was this dress a pain. 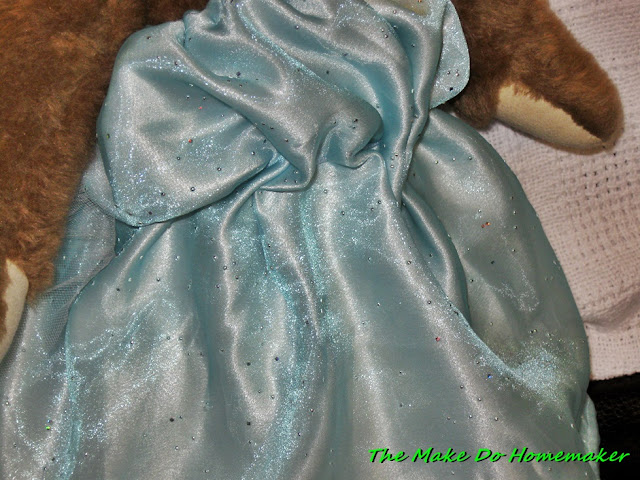 First this is a two layered dress.  The upper fabric is sheer with little rhinestones in the fabric, which was cute, but problematic (broke two needles when I'd get that one in a million shot and hit two stones at one time with my sewing needle).  The lower fabric is a silver satiny fabric.  So, I had to double fold the seams all the way around to safeguard against the fabric fraying, which added time and more chances for my needle to break on the rhinestones.

I simply double sandwiched the two fabrics together, sewed them together and then went about my merry way using the "new fabric" as my fabric for the dress.  It worked alright overall...just dealing with the fabrics was kind of a pain.

After I had the fabric cut and sewed together I used elastic around the top of the dress so that my daughter could simply pull the dress on and off the bear.  Since this made a glorified tube (since it's a teddy bear and doesn't really have much of a form to speak of), I hand sewed a piece of ribbon loosely into the front of the dress.  I secured one end of the ribbon down at the side seam for the dress, leaving plenty of extra ribbon on the end to use for the tie on one side.  I then used a really huge straight stitch along the front the dress and when I felt that I had it pretty much lined up right along the front I tied a couple of knots in the ribbon to make sure it wouldn't get sucked into the dress very easy (kind of like the idea of sweatshirt ties and the knots that are in them so they stay put a bit better).  Then I just pulled the one side that wasn't secured to the dress to gather the front of the dress and tied the ribbon in place in the back of the dress.  It actually worked rather well. 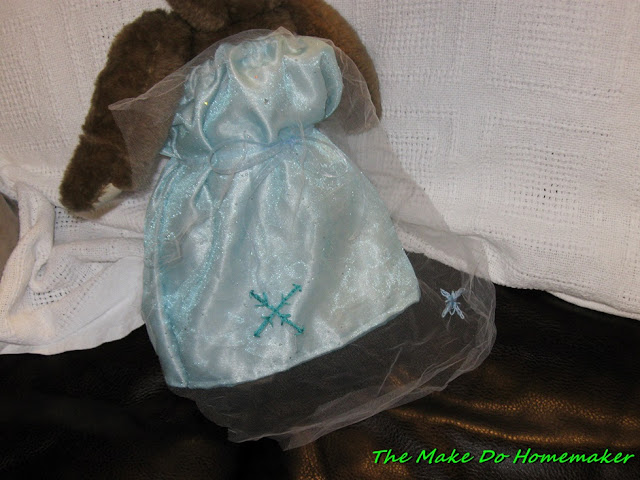 I then hand sewed a tulle train onto the dress and embroidered (or attempted to embroider) a few snowflakes onto the tulle.  This was a PAIN as the fabric is transparent so you have to make sure all of your embroidery lines up on both sides of the dress so people can't see any stitches but the ones you want them to see.  And the tulle isn't exactly strong weave wise so you have to be really careful to not break it as you sew. I used a full thickness of embroidery floss for these as the tulle is so loosely woven together.

I did two snowflakes and quit as I was worried about doing too much structural messing with the tulle, but I thought it turned out alright.

Total Cost to Make Gift:  Nothing as I had all the materials in my stores.

Total Time to Make Gift:  Four hours.
Posted by Erika, "The Make Do Homemaker" at 12:29 PM

Email ThisBlogThis!Share to TwitterShare to FacebookShare to Pinterest
Labels: A Gift a Day, Christmas, Holidays, Sewing