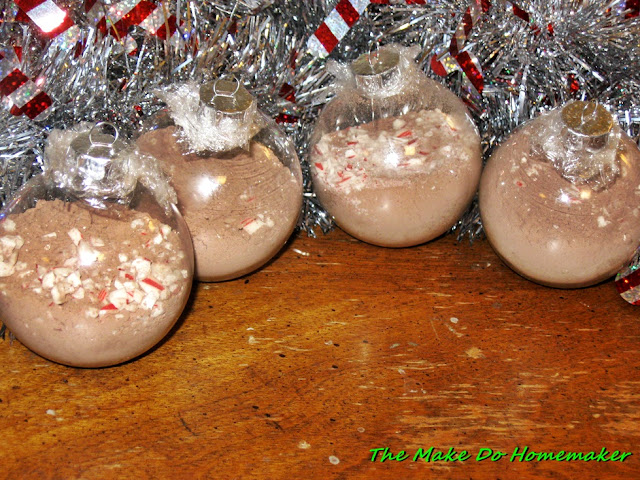 I ran into a couple tutorials to make ornaments filled with different things on Pinterest and became intrigued with the idea of making some for teachers and aides.  So, when I ran across a box of clear glass ornaments that I could fill at the used store for 1.00 (not all of them are pictured above), I decided to give the idea of hot chocolate filled ornaments a shot.

I washed the ornaments out with hot soapy water and then let them dry, opening down, for a few days to allow the water to evaporate out of them.

I then took a funnel and measured out the amount of hot chocolate from the hot chocolate/drinking chocolate mix I made earlier in the year for one mug at a time.  I then added that amount (I found that three heaping teaspoons was enough to make a good cup of hot chocolate, so that's what I did for each ball with a little extra "for luck").  I then crushed up some candy canes that I had around, four of them to be exact, and then added the crushed pieces into the balls, about two teaspoons to each ball.  I then put on the lids and felt all proud of myself for only making a BIT of a mess in the kitchen.

And then the balls shifted and fell over a little bit and I realized what the tutorials on Pinterest had failed to mention.  That the balls are OPEN at the top because of the way the mechanism for the hanger works, so they leak EVERYWHERE if they shift a little bit onto their side.

Now don't limit yourself when it comes to these types of ornaments.  You could fill these halfway with glitter and call it "fairy dust" and then glue the lid shut with a hot glue gun so they don't leak.  You could fill them up with some ash from your fireplace halfway, glue the lid to prevent leaking, put a label proclaiming "floo powder" and give it to the Harry Potter fan in your life.   Use your imagination.  You could have a lot of fun with these :).

Total Cost to Make Gift:  Well 8 ornaments came in the box and I used four, so .50 for the four I made.

Total Time to Make Gift:  About an hour to fill the balls and figure out a way to stop them from leaking and about 32 hours or drying time.
Posted by Erika, "The Make Do Homemaker" at 7:25 PM

Email ThisBlogThis!Share to TwitterShare to FacebookShare to Pinterest
Labels: A Gift a Day, Christmas, Holidays