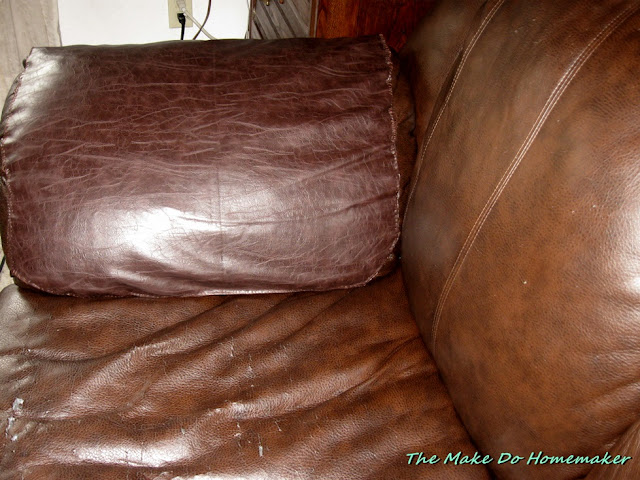 Today has been busy on top of a busy week.  So, let's get to money savings things I did this week.

1.  I redid the arm on our loveseat.  As some may recall, I had issues with our loveseat not doing great earlier in the year so I made a sling for the loveseat.  Like this... 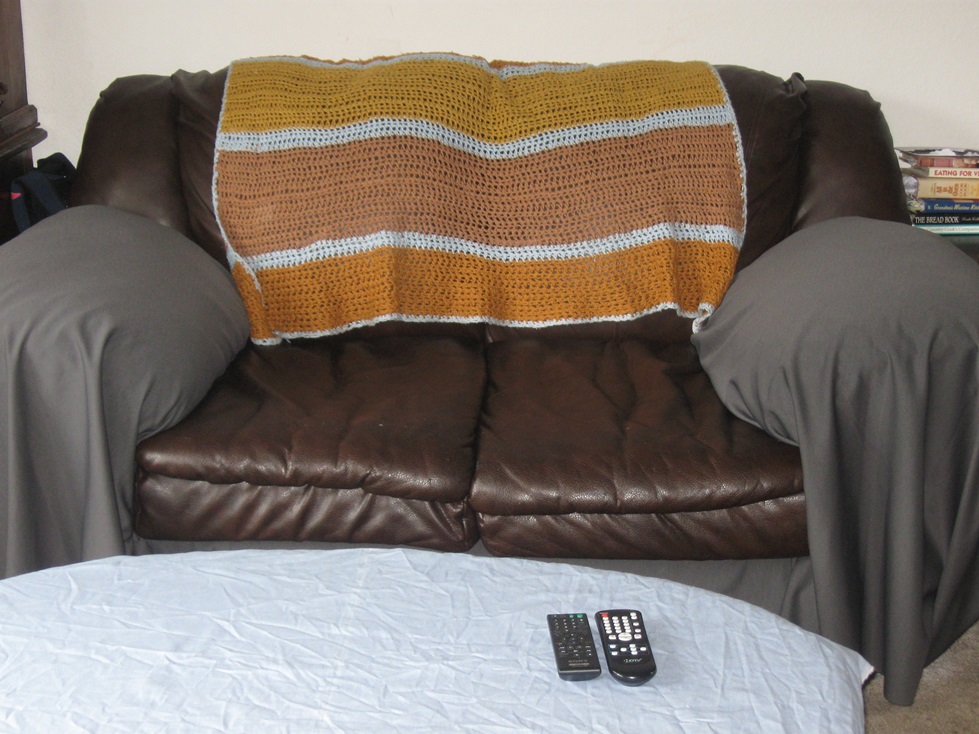 What I found though was that I was putting a band aid on a much bigger problem.  See, the leather on the loveseat has been used hard the last four years and it just starting shredding and falling apart.  And unfortunately the left side of the couch in the picture above got it the worst.  The sling, while a good idea in theory quickly started to show its disadvantages.  My son treated it like a ready made blanket to wrap himself up in, the thing was hard to tuck back into where it needed to be (which was often that it managed to come loose) and as the cloth slid over the loveseat arms all the time it actually made the shredding leather problem worse instead of helping it.  I finally pulled the sling off the loveseat and tried to deal with it just being ugly.  Unfortunately then my son started plucking the leather again and it just ended up being more and more of a mess.

I'd been looking at the used stores obsessively the last couple of weeks hoping to find a loveseat cheap to replace the thing as it was really looking ratty, but wasn't having any luck.

And then today I went to Jo-Ann Fabrics as part of my errands looking for yarn.  While I didn't buy any yarn (4.00 + per skein not on sale?  No thank you), I did find a yard of remnant leather for 6.00, originally the material sold for nearly 30.00 per yard, that was the same shade as the loveseat, so I went home and got to work.

If you look closely you can see the lack of seams, but overall I thought it turned out rather well.  The left arm is now one big patch and not a shred to be seen.  I've got enough material left to do the right arm as well (which I'm hoping to do tomorrow) as it's in pretty rough shape too, although not falling apart yet.  I took a cushion that was in better shape from my couch downstairs in the den (we don't sit on it as much so it's in much better shape) and exchanged it for now (so the ratty cushion you see in the top picture is now gone from the final picture here).  Now that I know that Jo-Ann sells the material I'm hoping to get a yard at a time and redo the cushions and other parts that need to be done.  We'll see how that goes.

Just a couple of notes to those who might think about doing upholstery work from someone who has repaired a few things in their day.

2.  Even if you have thick calluses on your fingers, they will hurt by the end of the project.  Guaranteed.  And no, in my experience, a thimble does not help this problem.

3.  If you feel like it really needs to be done?  Give it a shot.  Odds are whatever happens you will improve the issue.

But yeah, for a 6.00 (well 3.00 since I still have the other arm and half of the material to go) repair I think it looks pretty good.  My husband was impressed anyway :).

2.  I went to Carrs today and got cooking oil for 1.67 per container, brown sugar and powdered sugar for 1.67 per 2 lb bag and got corn muffin mix (3.99 for a six pack).  These went straight into the pantry to help pad it out.  I'm happy that I'm being able to check things off of my shopping list for next month and doing it while hitting sales and working it into my normal grocery budget.  This will definitely help me not spend as much money on a bulk shopping trip next month.

3.  I darned two comforters this week and am working on another that needs an entire side redone (it's got piping that is going to need work to get it all to align right).  I also mended a pair of jeans and darned two pairs of socks. 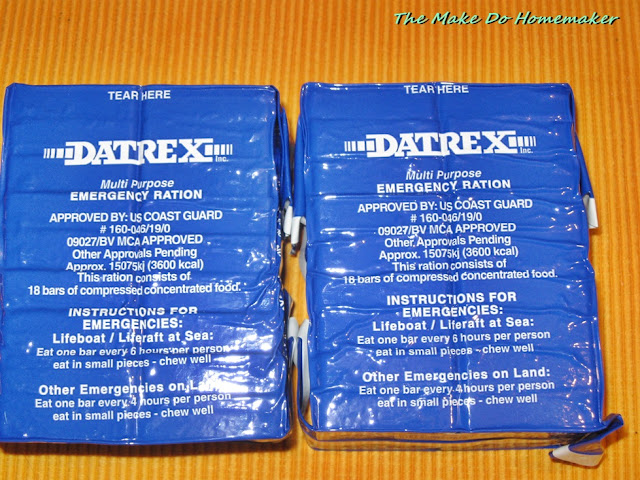 I went out today armed with giftcards and an errand list and one of the errands I had was to go to our local Sportsman's store and use up the rest of my husband's giftcards he had to get the above.  They are emergency rations for our 72 hour kits.  I researched online and found that these have enough calories to keep an adult alive for two days and everyone said they taste like coconut cookies.  Both win types of scenarios in my book ;).

With how much my husband had left on his giftcards I was able to get two packs and paid .20 out of pocket after giftcards.  I bought these primarily because they are relatively cheap and won't take up much space in a bag.

5.  I ran to Home Depot while I was out (I combined all of my errands that I had in town down to one big trip) and found they had solar salt and they even had one that had gotten torn and was 50% off.  I compared it weight-wise with a full bag and it seemed pretty full to me, so I grabbed the bag and used what was left on our Home Depot giftcard to get it.  I was able to get a nearly full bag of solar salt for .27 after giftcard was applied.  Worked for me!

6.  I picked up butter and cheese at our local Fred Meyer this week as butter was on sale for 1.99 a pound with in-ad coupon and the cheese was cheaper with the in-ad coupon then the price I pay for a log at the bulk store (and we do use cheese a lot around here).

7.  I started on a potholder for my daughter's teacher for Christmas using yarn I'd found in the bags and boxes that had been in storage.  I'm thinking I should be able to make pot holders for all teachers and aids this year and not spend any money out of pocket for gifts for them.

8.  I made all of our meals at home which saved us money and used coupons and sales (obviously) to get the most from my dollars this week.

And a quick garden update (as they go I guess).

I pulled the last turnip this week as it has been so wet that something, probably root maggots, were starting to eat on the little turnip and I wasn't going to lose it to bugs.  After that I pulled the rest of the plants for the year, worked the soil a little bit (still have some of that to go) and am starting to work in compost to help it to rest well over the winter.  I'm going to try an experiment and really bury the rosemary in my garden in the hopes I can MAYBE get it to overwinter and come up next year.  I'd love it if it would as I'm notoriously bad at growing rosemary from seed and would love to save the money from buying a rosemary plant next year.  Fingers crossed there.

I did invest in some seeds last week.  Brandy at The Prudent Homemaker made some suggestions for a fall and winter garden last week and while I knew in zone 4 that a fall and winter garden was kind of out, I did find some links to some cool seeds.  Alpine strawberries/wild strawberries are strawberries I grew up with when I was a kid in Maine and I loved them as they are super sweet. They sound like they'll be good summer plants here and since they don't send out runners they are great for planters and such, so I'm going to try my hand at planting them next year.

And so now that the garden is done for the year, the planning for next year's garden begins *laugh*.

Hope you all had a fruitful and frugal week as well!
Posted by Erika, "The Make Do Homemaker" at 9:13 PM