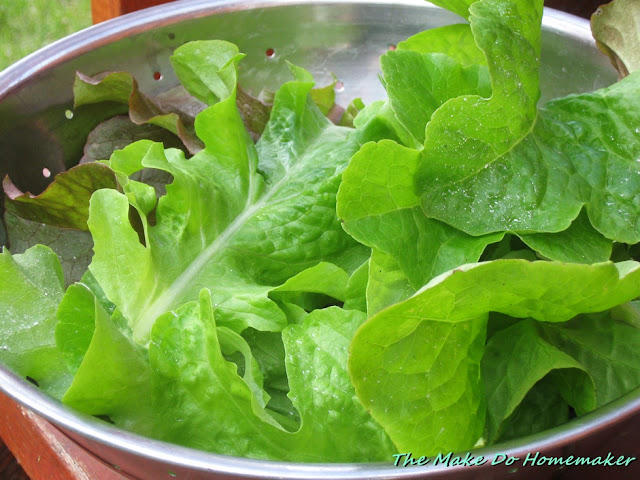 Things are finally coming ready in the garden, which is definitely helping in the money saving department.

Although, there are some draw backs.  I did some research online and found out that I was supposed to plant garlic in the autumn to overwinter and sprout the next Spring.  Since I planted the garlic in the spring this year, I'm not sure if I'm going to be seeing garlic this year.  If not, though, I am figuring I'll at least clip the greens to use as garlic-like chives in dishes.  I refuse to be defeated by a package that didn't tell me I was supposed to plant bulbs last year.

The tomato plants are also showing the results of nearly two weeks of solid rain and colder temperatures.  I'm hoping the sun comes back and the warmer weather or I might lose the flowers on my tomato plants due to flower drop, at which point the tomatoes may grow nice and green but won't produce any fruit, which would not be great at all.  But, overall, I've had good luck with planting tomatoes up here, so really law of averages comes into play eventually and I know I'm not going to get tomatoes from time to time.

1. I harvested lettuce from the garden for the first time this week, twice (one such harvest is seen above)!  It was great having salads with dinner again. 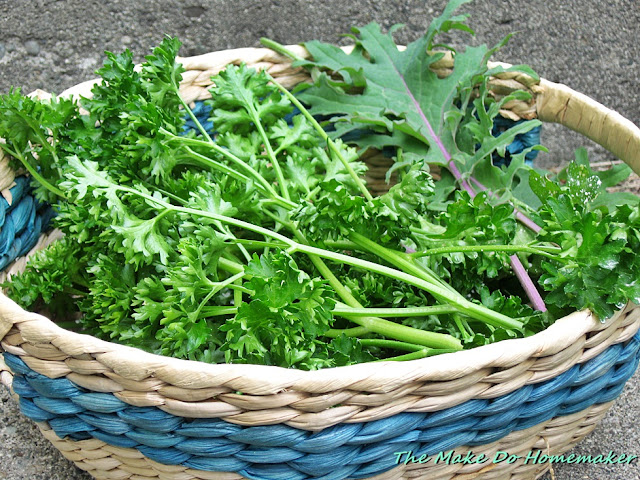 I also harvested parsley, sage, rosemary, oregano, two pieces of rhubarb and some kale from the garden and yard this week.  I'll be making the parsley into parsley "juice" to later use in parsley honey and I cut up the rhubarb and put it into the freezer to use in dessert next week as rhubarb doesn't seem to keep well once it is picked, so I wanted to make sure it would be ready when I was.  The herbs I've been using in dinner dishes throughout the week here and there.  The kale will be added to some soup I plan to make over the weekend for me to have for lunches next week. 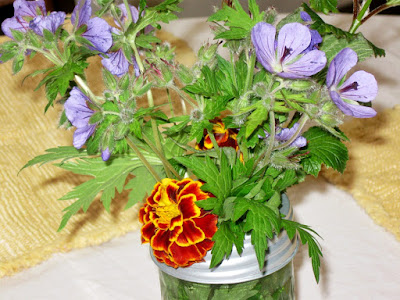 I picked some marigolds from the garden and some wild flowers from the yard to use as a centerpiece for my kitchen table.  It was nice bringing some bright things in from outside during the dreary weather. 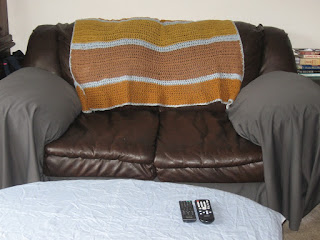 My love seat arms have definitely seen better days at this point.  Our leather furniture is about four or five years old now and between cats and kids it's starting to suffer.  Unfortunately for me my son also discovered one bad arm on our love seat where the leather was in bad shape and he started plucking the remaining leather to watch the bits float down on the drafts from the window.

To avoid this from happening, I am looking for a replacement for the love seat over time, but for the time being I made a fabric "sling" to go over the arms of the loveseat and under the cushions.  I would have attempted to sew a love seat cover for the entire love seat, but I've had couch covers and such in the past and they have driven me crazy the way the covers would constantly pull off the couch in different directions every time you sat down.  So, making a sling instead allowed me to cover the arms, pin the fabric under the legs of the loveseat to help keep the fabric in the right place and also, in the event that my son pulls the fabric off the arms (which happens often), it is very quickly fixed.  It's working quite well so far and it cost me nothing to do as I already had the fabric and I sewed and cut nothing...I just used the length of fabric in it's entirety.

5.  I cooked all of our meals at home, which saved us money. 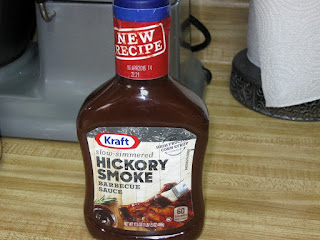 7.  I've been concentrating on getting the house organized, cleaned out and just making the house a nicer place to be.  I was inspired by a post on The Prudent Homemaker where she said (paraphrasing here) if your fridge is empty, clean it!  You'll feel better having a sparkling fridge.  And you know what?  She was right.  I've been cleaning cabinets that are getting kind of bare due to using items in them and it's nice having everything pulled out, cabinets cleaned sparkly and reorganized again.  I've even found new places to put things that worked out better than the "system" I had in place before.

8. We've continued to have fun watching different movies on YouTube and I watched some different shows on PBS.org as well.

9.  After throwing a hissy fit at my electric company, I looked out the window last week to see someone actually physically reading my meter, which was a nice change of pace (can you sense the sarcasm here).  As a result of reading my meter, my electric bill went down by 200.00 this month, which was a nice thing to see, and was still down 50.00 from last month's adjusted bill.  It will be nice to have that easier bill to pay next month for sure.

I hope your money saving efforts have gone well this week as well!