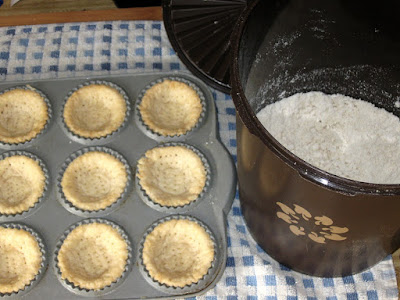 If you like pie, and who doesn't like some variation of pie, you will want to have a recipe like this one in your recipe file.

Shortcut pastry mixes are in pretty much every old cookbook I've found, including rationing cookbooks, so that's telling you how convenient mixes like this are to have around.

So, here's a recipe I've run into a lot over the years (originally the following recipe, I found was printed in a vegetable shortening ad) and makes a consistently good pie crust.  It makes a flaky pie crust, but it is still tender enough to be good.  And it's so darned easy to make a pie crust from this mix that you'll make pie more often, I promise.


Put all the dry ingredients in your food processor, along with 1/2 the shortening.  Pulse until the mixture is the consistency of cornmeal (about 3 ten second pulses did it for me).   Add the other 1/2 of the shortening and pulse until the size of green peas is formed (two or three pulses should do it).  Store in a tightly closed (preferably air tight) container in a cooler part of your kitchen.

Note:  You can also do this by hand by taking a pastry blender, a fork, or two knives and cutting the shortening into the flour, but it takes a lot longer and I'm supremely lazy when it comes to cutting in fat, I'll admit it.

To make pastry for a double crust pie:  Measure 3 cups of mix into a medium sized mixing bowl along with 5 tbs. ice water.  Use a fork to combine until a dough is formed.  Split dough in half and then turn out onto a floured surface and roll dough out as needed.

To Make pastry for a single crust pie:  Use 1 1/2 cups mix with 2 1/2 tbs. ice water.  Follow other directions above as stated.


Makes 7, ten to eleven inch pastry rounds.
Posted by Erika, "The Make Do Homemaker" at 6:07 PM