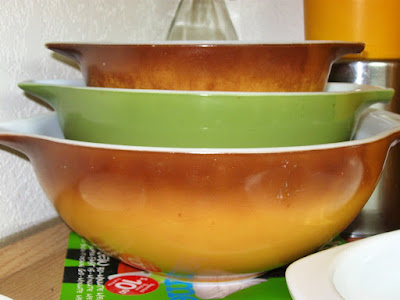 Well last weekend my family and I hit the used stores to see if I could find some kitchen things I needed, try to find some pants for my son (he just keeps growing!) and maybe find a few twin fitted sheets for my son's bed as well.

I didn't have much like on the clothing, sheets or needed kitchen utensil front, but I was able to find some AWESOME deals on vintage Tupperware and Pyrex to the point I could not pass those deals up (because I do use those things in the kitchen as well).

We hit my favorite used store first, as they usually have the best variety of objects at large with clothing and other things and I found...

1.  Two vintage Pyrex nesting bowls in brown/gold (seen up top) for 1.50 for the largest one and 1.00 for the smaller one.  They, to be honest, were in pretty rough shape in that they had surface scuffs and scratches on them from what appeared to be years of abuse.  I looked online and it seemed all the collectors suggested using Barkeeper's Friend to clean them, which I tried on the smaller bowl and wasn't impressed, honestly.  Both bowls were pretty faded from probably going through the dishwasher and the Barkeeper's Friend seemed to make it worse on the smaller bowl.  So, instead I took Cameo Cleaner to the bowls and that worked a LOT better...took off the scuffs and everything without fading them (Cameo is a aluminum and stainless steel cleaner my grandma swore by and she used it on tons of stuff...I take after her in that respect.  I get it at Fred Meyer, ironically it's sold next to the Barkeeper's Friend and stuff).

The collectors than suggested using coconut oil to oil the bowls...I used olive oil very lightly instead as I'm planning on using the bowls fairly often (so trying to avoid making them really slippery) and my son is allergic to coconut oil.  It worked fabulously, so hey I'm good!

Collectors also tend to swear by using empty sour cream containers turned upside down to prop the bowls up for display.  I wanted to separate them to stop further abuse of them clanking against each other, so instead of doing that (earthquake zone here!) I used some old dish towels folded up that were far past their prime. It worked wonderfully and is MUCH more stable than a small platform to prop them on. 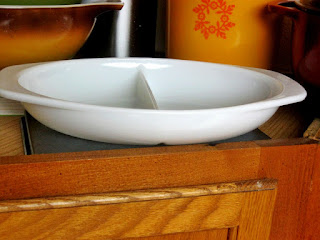 2.  I also found this Pyrex divided dish, which was missing a price tag, but the gal who was at the register gave it to me for 1.50 as well.  I really love it as it is in perfect condition and I can see where this will come in handy.

I wasn't quite sure how to use this dish as it is a divided casserole dish, essentially, but found some ideas online from old Pyrex inserts and such on how to cook two dishes at once and such.  Overall, though, I'm sure I'm going to be using this more as a serving dish than anything else.  Now to find me a lid for this :).

We then went to another used store we really like and I was able to score... 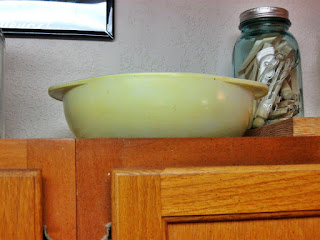 3.  This vintage Pyrex casserole dish for 1.25.  It was REALLY beat when I got it and is missing some paint, but I thought it was so cool that it was the same yellow as my Pyrex yellow mixing bowls (which means it is probably from the 40's), that I got it, cleaned it up and made it all shiny again.  I'm figuring this isn't going to be spending time in my oven to help preserve what is left of the paint, but it'll make a really cool fruit bowl for the table or even a back up mixing or serving bowl.  This is another one that I'm going to be searching for a lid for. 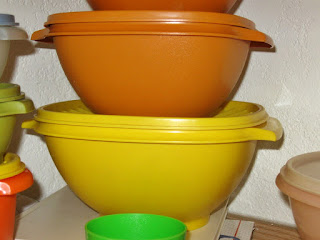 I got these two Tupperware square bowls for 1.50 each.  I have only ever found one other one with a lid since I've been collecting Tupperware and use it a LOT (LOOOOOVVVEEE it!) so I was thrilled to find two more.  They required some cleaning with dish soap, elbow grease and a nipple brush, but I got them nice and sparkly clean again. 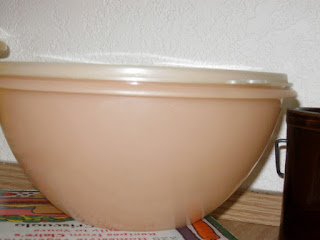 I found one additional Tupperware bowl, with a LID that is the really old style of Tupperware from the 50's.  It was really awesome finding that!  This set me back 1.00.

So yeah, as far as weekends go on the collecting front last weekend was awesome!  And I got some cool stuff that I can definitely USE, so that's always a great feeling.

I hope your thrifty shopping has gone well lately as well!