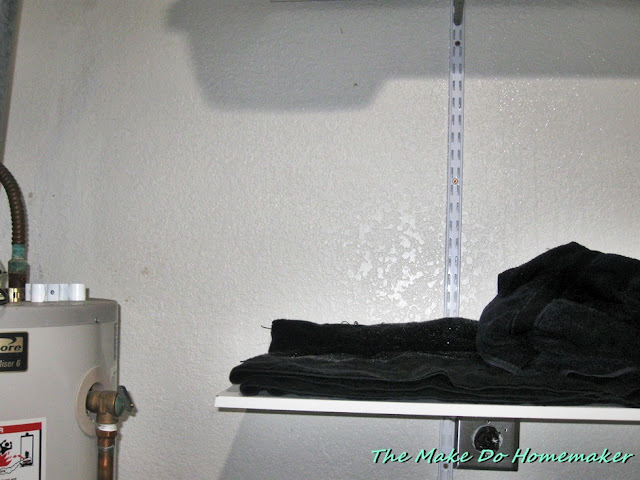 Yup, late again.  I can say this time it couldn't be helped, really.

A pic of what we have been battling around here the last couple of days is seen up top there.

Man, the plumbing in this house!

This started yesterday about the time my husband was set to get ready to go to work.  I went into the laundry room to switch the laundry when I heard the sound no one wants to hear.  This unmistakable hiss of water spraying from a pipe somewhere.  Luckily my husband was right behind me as I called for his help because, for the life of me, I couldn't figure out where in the heck the water was coming from, but there WAS water, saturating the shelf over the dryer especially.  I was looking toward the ceiling trying to figure it out when my husband quickly hunted the problem down.  The hose that you see coming out of the hot water heater top on the left there?  It had developed a hole in it and was spraying water everywhere. 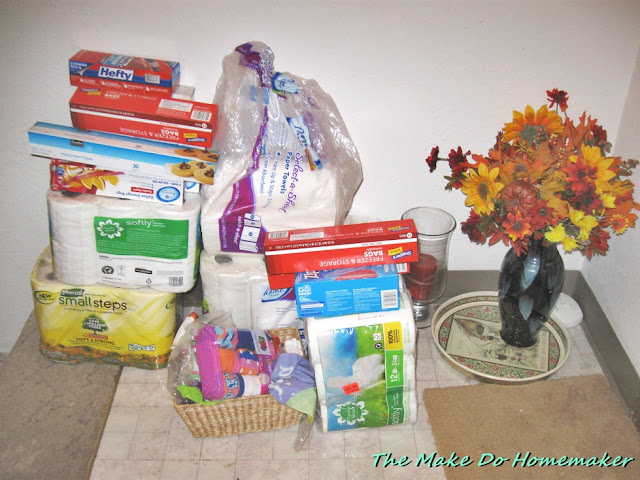 Which my job quickly became trying to save anything that could be saved from the shelf that the water had been spraying onto.  I'm still scared to turn my Food Saver on as it, and everything in the box it was in, was pretty much sopped hardcore.  I have things stacked on the stairs, on the landing (seen above), in the den...you name it.  It's a mess.

The only problem they found was that our plumbing is all kinds of screwball.  We have a mixer valve mixing our hot and cold water, somewhere, in the walls and my husband can't figure out how the plumbing ever worked in the house right with the way it seems to be plumbed.  Since they installed the new fittings and things we're still having issues.  The water is coming out of the pipes warm, not hot, and just isn't mixing properly and things.  The hot water heater seems to be doing its job (calls for flame when needed, hot water hose going out of the hot water heater is hot, etc), so we're trying to figure out what in the Heck is going on with our water right now.  There's a leak on the hot water side of the water heater that was leaking REALLY good this morning, but hasn't leaked all day and then just started leaking again tonight that I found, so we're going to try and replace that hose in the morning again, get a tight seal on the system, and pray.  Pray hard.  And hopefully that'll fix things so the hot water works again.  If not, bathing, laundry and dishes are going to be an awful lot of fun to get done, especially bathing.  Sigh.

In a nutshell, the last part of our weekend sucked.

So, yeah, other than yet another plumbing problem developing around here, let's get onto the money saving things that happened this week.

1.  Grocery shopping went minimal last week, and it's kind of showing this week.  I need to get to the store, probably Wednesday, and get "boy food" for over the long weekend, or I'm seeing Alvah freaking out at some point over the weekend, but overall I think we did pretty good.  I have all the stuff I need for Thanksgiving and even got some of the food types of things I'll need for Christmas out of the way as well.  The biggest highlight food-wise for my week was a friend of mine offered me a turkey that she wasn't going to use for Thanksgiving and there was NO WAY I was going to turn down an offer like that (thanks, Davina)!  I'm actually looking forward to having an extra turkey in the freezer as that will definitely give us a different option for some dinners later on :).

2.  The husband brought home some caps from 20 oz Coke bottles (he takes one to work with him every night to avoid buying fountain sodas too much, so he drinks that with his lunch instead) and said that we go through so many of them we might as well use the codes.  I told him that I had quit doing it as even getting a free 20 oz Coke with the codes took a lot more than it used to, the codes were a pain to type in (they seriously give me eyestrain after a while trying to read them), and I just didn't see the point in messing with it.

No joke, ten minutes later, the pile of Coke lids still on the coffee table in front of me, I perused the Money Saving Mom recap e-mail I get every day and saw that My Coke Rewards was running some promotions where if you put in 5 codes from the bottles you could get a free 5.00 Amazon gift card.  Now THAT was worth my time and eyestrain to input the codes!  And there were two different links you could get texts from, so you could get 10.00 in Amazon gift cards!  I quickly dug around the house and found the additional lids we'd need and now, 8 to 10 weeks after the promotions end (which is I have NO IDEA when) we'll get gift cards e-mailed to us.  Since the 6 packs of Coke are always purchased when they are on sale for 2.50 each, overall, I'd say that more than doubling our money with the Amazon gift card promotion was definitely a good return on investment!

3.  I continued to weed, ruthlessly this week, and we hauled a bunch to the used store. It felt good reclaiming house space from clutter and it didn't cost me anything but time to do.

4.  I rearranged the den and master bedroom this week (I'll try to take pictures here in the next couple of days to share later).  My husband was actually really happy with the arrangement when I got it all done and I was happy because now that my bed isn't in front of our bedroom window my cats aren't wrecking my headboard to get into the window.  And, double bonus, both my husband and I actually have access to receptacles (outlets for those not married to an electrician) to plug phones and things into at night instead of the awkward arrangement we had before.

5.  My husband got his labs back from his physical and basically his cholesterol was high (it runs in both sides of his family) and the doctor wanted him to make some dietary changes and come back in six months from now to get his labs redone and see how he's doing.  My husband and I sat down and talked about it and figured out small steps to take to start reworking our diet to fit with what the doctor wanted him to do.  We both agreed that other than baby steps (low fat milk versus whole, etc), things were going to start after the holidays because it just isn't going to happen before then.

Overall, I'm kind of looking forward to the challenge ahead and making this more healthy, but tasting good and to the family tastes.  I am looking forward to incorporating more fiber and things into our diet...here's hoping I can do it without the daughter going into full scale rebellion (she hates high fiber things like oatmeal, whole grain breads, etc...she drives me crazy sometimes).  Wish me luck!

6.  I got the first approval letter for my son's insurance renewal.  Now we just need to get through the I-Cap and I might potentially have another packet of paperwork to fill out here in the next couple of months (if they send it to me) where I'll have to break down the level of care my son needs so they can see he's still disabled.  Every year is a nerve wracking experience trying to get renewed for his insurance, but in the end it's always worth it because it's the only way we could afford speech therapy for him.

7.  I've been throwing money at our escrow account on our mortgage to try and make sure that our mortgage payment didn't go up by the home owners insurance company messing around earlier in the year and over-charging our escrow 350.00 (which they refunded back to me and we had needed the money at the time, so I hadn't put it right back into escrow like I would normally have done).  By throwing any money I could spare into the escrow, even though the home owners insurance had "gone up" (due to them not processing the insurance score until after they were paid and cutting me a refund check later) and the property taxes had gone up, our mortgage payment is only going to increase by 4.00 next year and we got a refund check from our escrow account for actually overpaying.  So, woot there!

8.  I re-watched Victorian Farm on YouTube this last week.  I really do find it relaxing to watch things like the Farm series first thing in the morning or when I'm waiting for the kids to go to bed.  It keeps me off of social media and getting pulled into unnecessary drama and things and helps me to just start the day on a better foot.

9.  I've been going through one room at a time and moving all the furniture and deep cleaning under everything, cleaning vents, dusting, etc.  This really is seeming to help the husband's allergy problems.  I'm hoping to get the daughter's room done in the next couple of days (IF she'll cooperate) and hopefully will have the son's room done by the end of the weekend.  I'm hoping a good side effect from doing all of this, too, is hopefully maybe it'll help the son's eczema too.


And yeah, I'm going to call it good there.  How about you all?  I hope your week went well and ended better than mine did!
Posted by Erika, "The Make Do Homemaker" at 9:52 PM