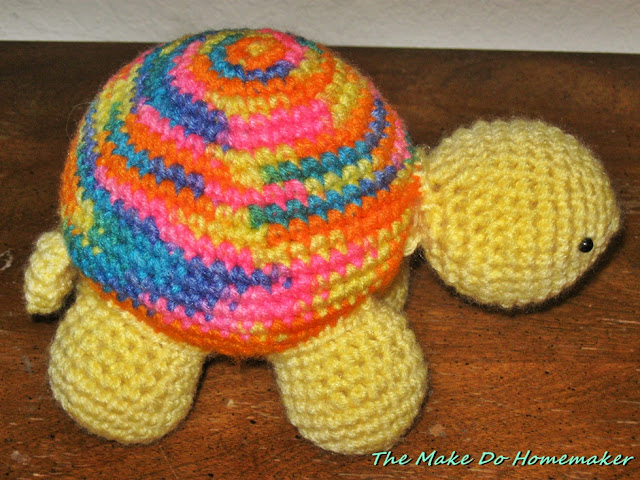 It was such a hectic week, I seriously forgot it was Saturday and panicked when I looked at the clock, realized it was 7:30 and my alarm hadn't gone off yet.  I was half way out of bed, ready to bolt to get dressed, when it sunk in that it was Saturday.

This week we ended up fielding my son getting sick with a cold (his entire class came down with it this week), who then subsequently sneezed and coughed all over my husband and I and now we're both sick and miserable.

In the middle of having to pick the son up because he was having a hard time at school (which I feel guilty about making him go to school now as he seemed like he had a cough and a stuffy nose, but was otherwise okay, but now that my husband and I are sick we wonder if he was sicker than we thought) and things we had to field a continuing issue my daughter has had at school with a boy this year that was crossing the line from "bugging" her into bullying her.  So, there were some calls to her teacher to talk about threats of hitting on the boy's part and things.  Her teacher talked to the boy and his parents and things seem to be a lot better now.  Here's hoping they stay that way.  Now it's just continuing to hammer on my daughter to ignore and avoid said boy to help make the situation go away.

The early part of the week saw me running around a lot, dropping off donations to the used store, looking for small gifts to go under the tree for the kids and things like that and the rest of the time I was cleaning like a demon (as much as my arm would let me) to try and get the house nice and clean before the Christmas decorations end up coming out in a couple of weeks.  I did make progress there, anyway, and the house is SLOWLY getting up to speed.

There was some things that happened on the money saving front this week, though, so let's get to those while my energy is holding out (between my arm and my cold I'm not getting a lot of sleep and then my son went to bed 1/2 an hour early last night, took a two hour nap and was up all night.  Never letting him do THAT again, no matter how miserable I feel I'll tell you what).

1.  Amazon had deals this week leading up to Black Friday and while on there I found a really good deal.  I have had continuing issues with my laptop not liking me watching things online and/or playing music without freezing up every two seconds (probably something to do with it being nearly 10 years old now) and I've also had problems with my ancient stereo (I mean I bought it USED for 2.00 fifteen years ago and it's worked like clockwork this entire time, so I'm not complaining by any stretch) finally losing it's stability in the CD player so my music stutters if a cat walks through the kitchen even.  I really like to watch videos on You Tube and things and I listen to music when I work ALL THE TIME so I kept trying to come up with a decently cheap option to fix the problems with.  I'd bought an Android tablet last year that might as well have come with a stack of papers as it has been a glorified paperweight from pretty much day one (total waste of Christmas gift cards from family), so I was being really careful on what to do.  I thought maybe about buying an MP3 player and then just borrowing my son's I-PAD to watch videos or something, but instead I stumbled on a find on Amazon!

They were having a sale on refurbished Kindle Fires.  I found a really good deal on last year's Kindle Fire 8, applied gift cards I had saved up over time and managed to get the thing super duper cheap.  Here's hoping it works better than my Android tablet (we have an older Kindle Fire that we got for my daughter that still works great, so here's hoping our luck holds in that area).  I'm thrilled as I found a free app I can download to make the Kindle Fire into a better MP3 player, and I know I can watch my videos on it, so overall life is good in that area.

2.  I got a catalogue in the mail from LL Bean for their holiday stuff.  In this particular catalogue they gave me a 10.00 off any order promo code, no minimum order, so I went online and found a water bottle for 10.00 and got it for free (shipping through LL Bean is free, although when they started that I found that the price on EVERYTHING they sell went up to make up for it).  My daughter insists on getting ice water every evening to go to bed, so that her water stays cold throughout the night if she gets thirsty, so the water bottle will definitely come in handy.  Especially since some of the water bottles she's had since Kindergarten are starting to show some major wear and could probably see getting rotated out of the dish cabinet.

3.   I spent about 60.00 on groceries this week, but a good portion of that was buying my daughter strawberries (4.99 per container this time of year and I got two so that my husband could have some because he really likes them too) and some other fruit to cheer her up after the week she had.  I was kind of sad to go over budget on the groceries, but at least it's healthy food, it did cheer her up to find the strawberries in the fridge and she'll definitely eat them, so it'll work itself out.  And I was able to get the rest of my Thanksgiving stuff, minus fresh herbs (if I can't find them, I'll just use dried and hope it works out okay) in there as well.

4.  I made a beef roast on Monday, which worked out well as with everything going on we were able to eat the left overs from the beef roast for the next three days for dinner.  I pulled out some hard rolls from the freezer that I'd gotten in huge bag a while back from Carrs and made french dips for dinner a few nights and then one night we just had roast beef sandwiches.  Last night my husband pulled out the Erbswurst from the fridge (he actually LIKES that soup, go figure) and was making that as he likes to eat it when he has a cold and I just made what was easily made from leftovers for the kids and I had some tomato soup I had frozen.  It was definitely nice having that available as an option (thanks to those who recommended making soup ahead to use later.  It's definitely paying off now).

5.  I was able to finish, despite my week, a gift for my new nephew who is due in January (seen up top).  I'd LOVE to take credit for the cute crochet, but unfortunately, one I'm not that talented on the crochet front and two, I've found that knitting and/or crocheting right now with my arm is out and out tortuous to do.  BUT, I did find a project that someone had started for the little turtle up top and all it needed was some stuffing and to be sewn together/finished up.  It was .50, so I grabbed it and finished it.  And voila!  A little crocheted critter for the nephew :).  I'm still hoping to make a receiving blanket or something to go with it, but we'll see how busy I am in the next couple of months.  I also worked on the embroidered mittens I'm making some more as well.

6.  I used a coupon that had printed off at the register at the store to get myself a .57 cup of hot chocolate at Starbucks after the discount was taken...which I was actually kind of astounded that I couldn't get a hot chocolate for free with the discount as it was a pretty high value coupon, but at least it was under 1.00 after it was all said and done.  I normally wouldn't have indulged like that, but with my cold I was having a hard time stopping coughing yesterday, so it seemed like a good idea.  It worked.  Can't say how it tasted since most everything tastes like cardboard right now, but it was hot, and hot is good right now *laugh*.

7.  I got the Jo Ann Fabrics ad in the mail for their Black Friday sales yesterday and was finally able to look at it today.  I'm actually kind of disappointed in it as it doesn't seem like the deals are as good as in previous years (like 70% vs. 75% off in previous years and such), but I am hopeful that online sales combined with coupons on Wednesday or later might net me some decently cheap utility fabric for the coming year (I'm hoping to get some more unbleached muslin as I use muslin a LOT in projects), but if I don't I still have fabric, so it's not like I'm going to melt away from not having it or something :).

8.  I needed to pick up ink for my printer, finally, this week as my son's new care coordinator likes to do everything via electronic means, so I had to print off about 50 pages of paperwork, fill it all out and scan and return to her the parts that needed attention.  I did have a coupon for 10% ink cartridges so I got the cartridges for 50.00 (ouch ouch ouch), but at least they are extra large and should last a while.  So says the box anyway.  We shall see.  The box even came with some post card sized photo papers, so I might be able to use those for something interesting in the future.

9.  I mended two pairs of pants for the kids this week.  The pants fit perfect in the waist, but the legs were just too long, so instead of making the kids try to hike up their elastic waist banded pants (sweatpants in my son's case), I just hemmed them.  I was actually rather happy with how the hems turned out as I don't have a lot of practice hemming things for other people (I'm short, so I'm used to doing it for me).

10.  My husband has watched free movies on YouTube and other online resources (like Amazon through Prime) while being sick, which definitely saved us from having to purchase movies that we might or not might watch again.

And yeah, there were other things but I lost my list in the chaos of the week, so I'll stop there for now.  How did you all do this week?
Posted by Erika, "The Make Do Homemaker" at 4:17 PM