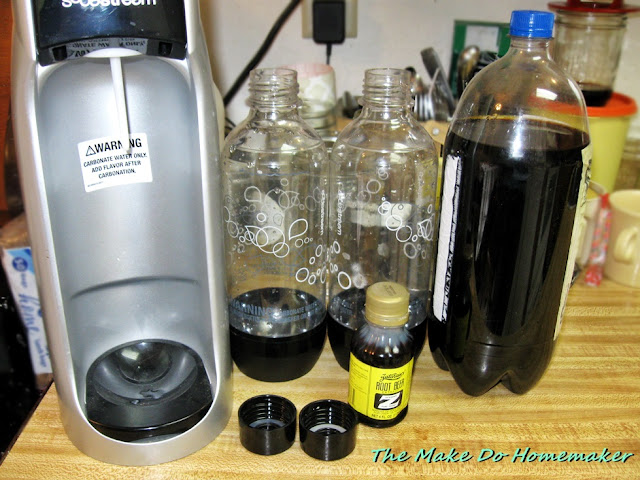 Well, this week has been kind of depressing.  It's been a disappointment.  One after another.

My husband didn't feel well due to allergies, so we had to reschedule his dental appointment.  While upsetting that we had to do that, I saw the silver lining on that one as it allowed me to conserve gas to hopefully save me money until this week's paycheck came in.

My daughter's stomach condition kept flaring this week (end of school excitement combined with allergies just throwing her system off I'm sure), so I ended up having her home one day and had to pick her up early another day.  Every time I feel like we got her stomach condition controlled it shows me who is boss.  I also had to pick up the kids early another day due to my son's allergies getting to him and knocking him around.

My son's allergist appointment was yesterday.  We found out we can't start him on allergy shots until he is completely hive free because if he has hives on the shots we have to stop them immediately because you have to assume the treatment is causing them.  So he's back on massive antihistamines to get his allergic reactions under control.  The allergist warned it wasn't going to be easy as he has a "perfect storm" of allergies going on.  Lovely.  Poor kiddo.  So we have instructions for doses of Zyrtec and Benadryl types of drugs to give him and we go back in a month.

I called the cooperative extension service to check on my canner and to hopefully get my other canner in to check as I wanted to can some potatoes maybe and found out that the gal who checks the canners isn't going to be in now until June it looks like.  So, I'm going to be dehydrating potatoes instead as all of the potatoes I bought, despite doing everything I was supposed to do to stop them from sprouting...sprouted.   I am working on cleaning out a fridge drawer to stick as many as I can to stop them from going soft on me, but I have probably 20 pounds of the 30 lbs I bought left still, so I figure I'd better do something with some of them.  I would just can the potatoes and figure it'll be fine, but my canner lid has taken a few good tumbles and I worry about the steam gauge not being accurate anymore.

So, with the kids getting picked up early and my daughter's stomach flaring, I got next to no yard work done this week on top of everything.   At all.

Between that and finding out my family is having their own issues that upset me (a stupid delay in the sale of my step-mom's house that she desperately  needs the money from to survive, my half sister getting evicted from a house that she shouldn't be able to be evicted from and my older sister losing her job)...it's been a week to learn depressing news.

So, anyway, that and money being tight to the point of depressing it's been kind of a hard week.  Luckily I haven't broken down into a puddle of tears as an outlet.  Yet *sigh*.

At any rate, despite the way this week has gone emotionally, I did manage to get some things done on the money saving front.

1.  If you are wondering where the weekly shopping trip was this week...well...I didn't really have any money to get much, so I just bought Coke and chips for the son and milk for the week (spent 36.00).  I also got some Epsom salts as we are working on incorporating those into my son's bathing times to hopefully at least get some magnesium into him and hopefully help his skin some.  It does seem to help with the eczema irritation a bunch when he has a bath with them in it.

2.  I wanted to make root beer floats for dessert tomorrow, but we don't have any root beer around here and I really didn't have the money to just blow on something we don't need like root beer.  But, I remembered that I had some root beer extract that I bought years ago with my daughter's corn allergy to possibly make root beer with.  So, I took some extract, some sugar and my soda stream (also bought years ago...mainly to see if my son would drink any type of carbonated juice) and made some root beer.  I actually kind of like the home made stuff better than the store bought soda, although it doesn't have the level of carbonation as the store bought stuff (seen above).

3.  Despite having a lot going on this week I did manage to can something pretty much every day this week so that no discounted fruit went to waste.  I also made sure to use up some frozen fruit that I really needed to use to make something as it was getting near it's expiration date. 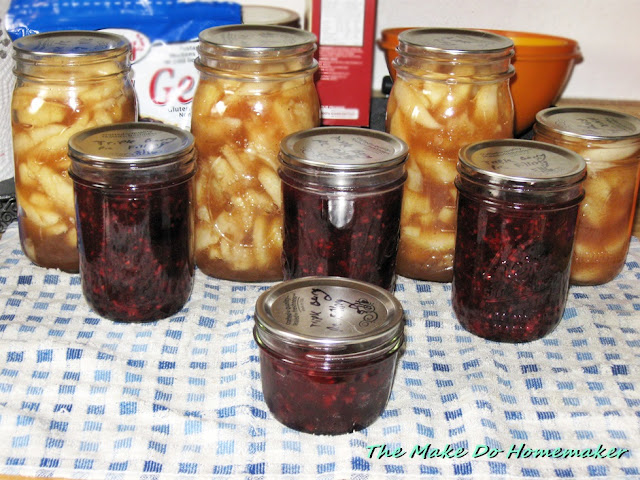 Monday I made apple pie filling with some of my discounted apples.  I used the recipe in the Ball Book of Home Preserving and for once I got the EXACT yield they said you'd get (7 pints).  I was impressed.

Tuesday I made pie filling with what turned out to be odds and ends of berries I had in the freezer.  I thought I'd make raspberry pie filling, but found that I didn't have enough.  So digging in the freezer I found some blackberries, some strawberries (from last year that I had left over) and some blueberries to add in with the raspberries.  I call it "triple berry pie filling" as a send up to the "triple berry pie" from "Bear in the Big Blue House" as my daughter loved that show (and will still watch it with my son) so I thought it might inspire her to actually try a pie when I make it even though technically I guess it's "quadruple berry pie filling" instead *laugh*.

I'm hoping to make some cherry pie filling and some strawberry rhubarb pie filling later in the season to fill out the pie options for over the winter, but so far I'm happy with how it's all turning out. 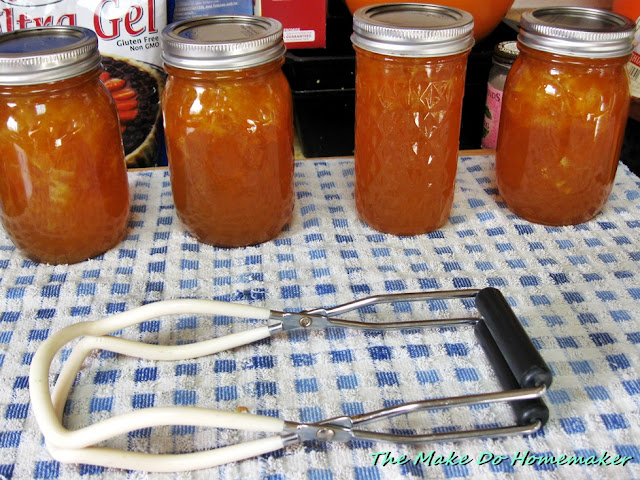 Wednesday I made orange marmalade.  I kind of combined recipes for this one.  I followed a traditional recipe but just boiled the orange zest for about 1/2 an hour until soft instead of letting it sit for days in soaking water to soften.  And then I took a bit of advice from Pickyourown.org and when I made the final recipe I used orange juice (one of the bottles I got for free from Freebie Friday) in the marmalade instead to take the place of some of the water.  It gave the marmalade a really beautiful orange color and also gave it a wonderful depth of flavor once it boiled down the right consistency.  The set on this was so good I can stand the jars upside down and the marmalade doesn't move.  I felt proud of that one!

And I'm also loving that I now have marmalade in the pantry as I LOVE orange marmalade and never buy it because it's expensive (if you get the good stuff and I like the good stuff).  My favorite way to eat it is I take a page from Graham Kerr and strain some yogurt into yogurt "cheese" and then I spread that on some English muffins with the orange marmalade on top.  Beats the pants off of butter on an English muffin any day!

So for 2.00 worth of reduced oranges and lemons, some sugar and a free thing of orange juice I now have enough marmalade to last me quite a while.  I'm happy! 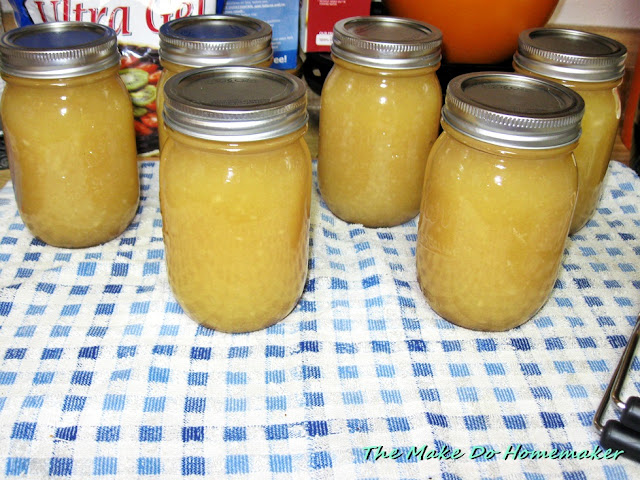 Thursday/yesterday I made another batch of applesauce.  I did have to add 1 cup of sugar to this batch as I had a lot of granny smith apples and other more sourish apple types in the bunch, so it was a BIT puckery for me when I tasted it, but overall it turned out well.

I still have a bunch of apples to can believe it or not, so I was hoping to can apples in syrup tonight (so I can use them in cooking or for crisps and things later), but my TMJ is flaring tonight and I have a headache as a result, so I just said "no" until tomorrow on that one.

4.  I was running low on sugar after making the marmalade (disadvantage to making marmalade with no pectin is you use a LOT of sugar to make it), so instead of spending some of my severely limited grocery budget to buy sugar this week I just opened the couple cans I had of sugar in my food storage and added them into my bulk sugar container.  It'll see me through until later in the month when I can hopefully get a big bag of sugar.  So, really, between canning and the sugar I shopped a lot from my own home this week compared to going grocery shopping.

5.  I used up some hamburger that was really freezer burned in the freezer (some of the odds and ends I dug from the depth of the fridge freezer) and mixed it with some ground turkey and decent hamburger and used up the rest of my taco seasoning to make a big batch of taco meat.  I'll freeze any we don't use in the next couple of days so all I'll have to do is quickly reheat some hamburger for tacos on nights when I'm strapped for time or not feeling well.  By mixing the meats and then mixing in the strong flavoring of the taco seasoning it worked to cover the taste of the freezer burn really well.

6.  I received a sample of cat food this week which was fortuitous in that it allowed me to feed the cats with the free can of wet food and will allow me to not have to buy more wet food until tomorrow (it padded out my cans a bit).

7.  I mended my son's stuffed back hoe this week, a big hole in one of my husband's t-shirts and a seam that was giving on my sneaker.

9.  I took advantage of a free resource this week when my kids were in school.  Naps.  I have been running on emotional and physical empty this week so taking a nap here or there really helped to give me a recharge.

10.  I read some free books that were available on Amazon.com this week and I also took advantage of the internet to watch some shows for free as well.

And there you are folks.  Some of the things I did to save money this week.  How did you do?
Posted by Erika, "The Make Do Homemaker" at 9:19 PM