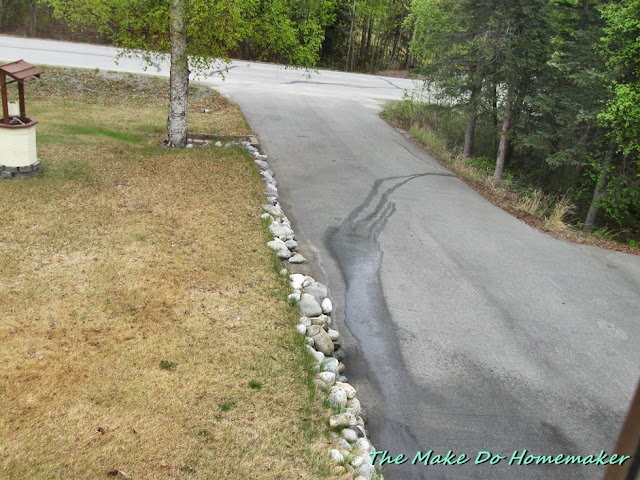 Well, there was good and bad last week.  The week was depressing for sure, but there was some good there as well and I managed to get some things done.

1. Monday, before I had to go and pick up the kids early due to allergy issues, I managed to rebuild the rock wall in our driveway.  I had wanted to start on the back yard that day, but the rock wall was getting BAD.  The rocks just sit in the bank and the previous owners never used concrete to set them in.  So when the bank starts to just crumble in dry weather (of which we've had a lot the last couple of years) whole sections of the wall will just collapse.  I stacked a lot of rocks that day, killed off one ants nest that had been built underneath one of the rocks right by my house with some diatomaceous earth and then I took a push broom and swept about four years worth of accumulated leaves and other stuff that had piled up along where the wall was and swept it all into the ditch on the opposite side of the driveway (it's a drop off type of ditch on that side, so the more I throw down there to slowly fill it, I figure the better off we are).  I probably recovered two feet of driveway by doing that and the best part is that it looks SO much better now than it did before..it was looking pretty derelict by the end of the winter.

2.  I did some research online on when and how to move rhubarb plants and found that you can move them in the spring or in the fall after they seed.  If you move them in the spring you don't get rhubarb for a couple of years, which panicked me a little as I know I need to move my rhubarb plant, but I don't want to be without rhubarb as I need it for winter preservation.  So, I will move it in the fall once it goes to seed.  I also contacted a friend of mine who had offered me her rhubarb plants and asked if I could wait and harvest the rhubarb in the fall (they don't use it) and then when the plants go to seed come back and grab them.  She was okay with that (thanks so much, Davina!) so hopefully I'll have plenty of rhubarb for canning and for the freezer this fall and I'll be able to have time to clear the bank where I want to put them.

Bright side to the colder weather we're having this year (it's been dry and HOT the last couple) is that the raspberry bushes that I thought were just going to finally kick the bucket on me are actually growing WELL right now, so hopefully if I can clear the underbrush from the bank and stake the raspberry bushes as they grow (and move the one from further up in my yard to said bank) I might be able to preserve the bushes I have left.  If this works I might be able to rebuild my raspberry patch and this time control how it grows (the previous owners just let them grown wild) .  I'm then hoping to plant my rhubarb on the same bank and hopefully get some sort of rock (pea gravel or something) in there to help with drainage and help to control weed growth (anyone got any tips on how to do that without spending a fortune in things like landscaping plastic or anything?). 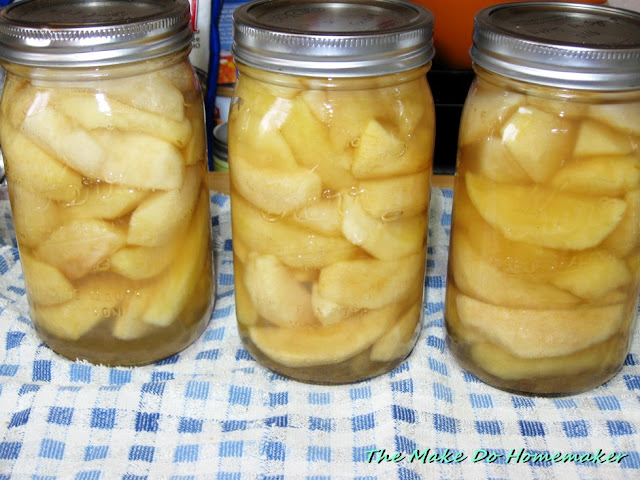 I got the rest of my discounted apples canned last night for use in recipes later as well (seen above).  I'm really happy how the preparations for winter are going so far.  I pray that my lucks holds and I'm able to get more accomplished as the summer goes on.

4.  I started to fill out the paperwork for TEFRA only to get e-mailed an entire new packet so everything was filled in right in the fields.  So, time to start over again.  At least I have appointments this week (orthodontist tomorrow, root canals for husband on Wednesday, occupational therapy for son on Thursday) where I'll have time to get it done and e-mailed back to his new care coordinator.

5.  We went to the nurseries on Saturday where I was after a few things with my limited budget.  I wanted to get some thyme, some sage (I planted some seeds but I wanted some that would be ready to harvest sooner...I LOVE sage) and some rosemary for my one planter out front, which I got.  My daughter REALLY wanted to plant petunias, so I found some cheap wave petunias at one of the nurseries and we planted those in the front raised bed (I figure wave petunias can compete with the chocolate mint once it starts spreading and hopefully fill in the bed a bit).  I also got some Nasturtiums to plant in my one other white planter up front as they are edible flowers, are pretty, are good in cool weather and are easy to grow (so said all the online resources anyway *laugh*).   I'm just all excited as I've been looking for Nasturtium seeds EVERYWHERE and couldn't find any, but finding the seedlings was inexpensive and will hopefully allow me to grab some seeds when they go to seed later for next year.  So, all totaled this year I spent about 20.00 on the garden and 13.00 of that was compost and soil that I bought earlier (I'm hoping to get some rabbits this year sometime and hopefully next year I'll have compost and not have to buy any because of that, but time and finances will tell if that gets done this year).

I also planted the basil seeds indoors.  We'll see how they do.

So, yeah, that's what I was up to this week (other than obsessively watching the garden for signs of seedlings popping up and throwing it tons of good vibes.  Little seedlings are starting to pop up pretty much everywhere, but now the true test begins...am I growing vegetables or are the weeds starting to come back into the garden.  Only time will tell, BUT I know that I have at least two pea plants coming up (yayyyyy!!!) and my mixed lettuce and cabbage planter is popping seedlings up, so I have that going for me at least :).

And so onto this week's goals!

And there you are folks.  My limited goals for this week.  With so many appointments I know that I need to keep it simple or I won't get anything done.

What are you up to this week?