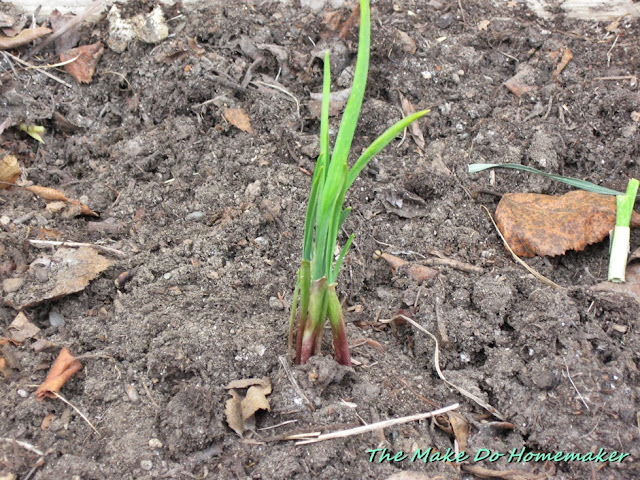 Thank goodness, as money saving weeks go this one went better than last week.  No eating out, grocery shopping went well and overall it went alright.

Ways I saved money this week?

1.  I turned up the garden this week to help to condition the soil for planting and I discovered a neat find I wasn't expecting.  Three garlic plants that survived me harvesting the garlic last year (the above is actually one plant, but has three offshoots...I'm going to be interested in how that plays out)!  I discovered them, unfortunately, when I dug up the garden thinking they were grass, but I immediately transplanted the ones I found and hoped they would survive.  So far two out of the three are doing pretty well (hard to tell how the other one is doing so far as it was still just coming out of the ground when I accidentally pulled it up), so here's hoping they stay that way.  If not, I didn't lose anything so I won't be too upset either way.  But if they survive, yay unexpected garlic!

2.  Speaking of the garden...I had a plan which has kind of gotten derailed the last bit when I found out how much dental bills were going to cost, so I'm having to rethink my strategy.  Normally I plan on about 50.00 between soil and seedlings, but I'm going to be looking at less than that this year to save money (we'll see how it goes).  So, I'm going to be starting some seeds this week inside (as it's still frosting outside at night) in...some type of planter as I don't have seed starting kits or anything, so I am going to get creative and see how it goes.  I'm going to use the old soil from some of my planters to start the seeds, so that will save me a bit of money at the start as well.  The only plants I'm figuring on getting right now are a few cabbage plants and that's an "iffy" type of deal and maybe a few herb plants.  Otherwise I'm going to be gambling on seeds, which I pray grow well and are plentiful.  I'm going to attempt to dig up things that will work as planters around here where I can and otherwise it'll be a matter of hitting the home improvement stores trying to find good deals on planters and soil.  I have faith that I can do this cheap and actually expand my garden beyond what it has been in past years as I really do want to put up as much as I can for winter and enjoy as many fresh vegetables and things as we can this summer. 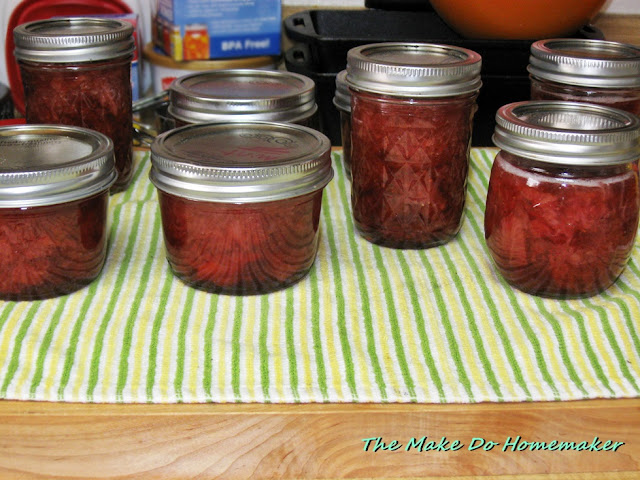 3.  I got strawberries cheap this week and had planned to make strawberry jam out of them, but couldn't find the one box of pectin that I was sure I had somewhere, so instead I decided to make strawberry preserves out of the strawberries instead.  Strawberry preserves are like jam, except a bit more chunky and you make them the old fashioned way...with strawberries and sugar and that is it with lots of cooking down until the mixture reaches the gel stage.  I was kind of worried about doing this as in the past I've always either overcooked jam into a kind of solid brick by double guessing myself on the gel test or I'd end up with strawberry sauce because I didn't do it long enough.  I studied my Ball book to get a better idea of how the sheeting from a spoon test should look and by following the directions to the letter I was able to, for the first time, achieve a good gel on my preserves! I was proud I'll admit it.

4.  I shopped sales and used coupons to get the most out of my money.

5.  I requested some free samples this week, which if I get half of them I'll be happy as there are things like free cat food, free magazine subscriptions and other things I could use or would enjoy (thanks for the tip offs on some of those, Stephanie!!!).

6.  Instead of running out and buying wide mouth mason jar lids when I was running low, I quickly hit my kitchen and pantry cabinets and found any jar that was getting empty and had a wide mouthed lid that was still good (never sealed before) and I used up the contents or switched them to Tupperware and grabbed the jar lids to use for canning.  I managed to dig up an additional 12 lids this way, which will definitely come in handy.  And it saved me 4.00 or more by not having to buy them at the store, so yay!!!

7.  I darned some socks this week.

8.  I sat down while my husband was in the dentist chair and not only showed a younger woman how to darn socks (she was fascinated at what I was doing, so I showed her how to do it), but I also sat down with some cookbooks and bookmarked things that looked interesting for upcoming menus.  I find this really saves me money in the long run, as when I do it I also mark on a pad of paper what recipes I liked and what book and page of said book they were on.  This allows me to quickly peruse my list for upcoming menus so that things don't get too boring (at least I hope).

9.  I was reading on Blue House Journal where Terri used empty bread bags to store meat in when she froze it instead of using freezer bags.  I really liked the idea, since with my son I end up with a lot of hot dog bun  bags, so I've started using bread bags in the same way.  Although since I tend to store like types of meat together in a freezer bag (I'll put them into one freezer bag and then put those freezer bags into an outer freezer bag to keep them a bit more organized),  I wrap the meat in the bread bag and then put those into a freezer bag marked with the type of meat they are.  It's been working really well and I plan on keeping up with this habit!

10.  I won a contest this week on the Ball Facebook page.  I was one of fifty winners to get some dissolvable labels from the contest.  It was a small thing to win, but I was still really thrilled as I don't win things, so it was neat to finally win something :).  And it'll help make my jars just a little prettier, so hey I'm happy about it!

11.  We ended up eating a lot of leftovers for lunch this week to not only save money, but also to make sure things don't go to waste.

And there you go folks.  Some of my frugal adventures for the week.  How did you do?

Oh and hey, speaking of potentially frugal things you can do, have you entered the Invisible Glass Giveaway yet?
Posted by Erika, "The Make Do Homemaker" at 10:28 PM