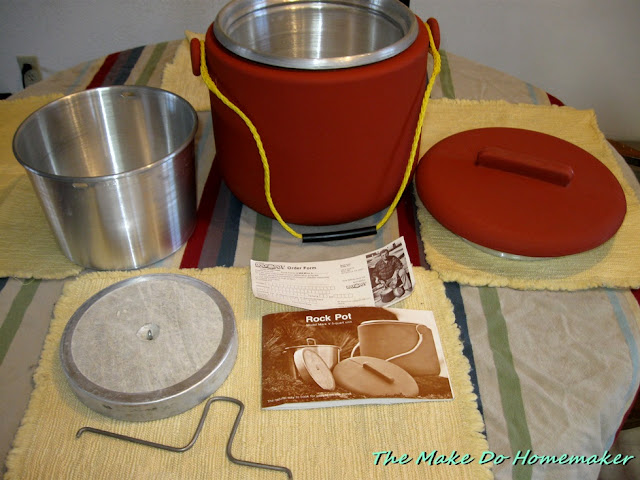 This week I am sharing with you one of the coolest finds I've found at the thrift stores to date!  And that's saying something.

What you see above, my friends, is a game changer, or can be, when it comes to energy consumption with cooking.  What you are peering at is a thermal cooker!

I've been quasi obsessed with thermal cooking since I read about the hay box cooking of WWII in my British rationing cookbooks.

The concept is simple and goes back to...well probably about the time men walked upright and discovered fire really.  You take an object that retains heat, like a slab of rock, heat it up to really hot, put it in a thermally insulated environment (like in a pit or something), put your food on top and then put more insulation on top and let the heat do it's thermal voodoo.  This is just more modern and on a smaller scale than, say, a luau pit.

You heat the slab of stone with this model (the big disc there), put it in the bottom of the cooker (which is, essentially a GIANT thermos) after heating the rock on a burner for a half an hour.  You heat your food at the same time in the inner pot to brown your meat and such.  Once you put the rock into the cooker, put your inner pan on top of the heated rock, slap on the lid and walk away.  The rock and cooker will continue to cook your food for up to eight hours and will heat it for even longer.  So you can put this baby on the counter in the morning with a little prep work and just walk away and have dinner done at suppertime.  Kind of like a crock pot, but no electric involved for most of the day.

I've been wanting one of these to take on our camper for a LONG time as you can heat the rock on a campfire or you can heat it on your camper stove, but preserve a bunch of propane by heating the rock and forgetting about it.

I'm also looking forward to trying it out at home just because really as I have seen some cool recipes in my rationing cookbooks that call for hay boxes and stuff and I'm intrigued to say the least :).

These cookers normally retail for 70.00 to 80.00 on the low end of the cost spectrum and those are pretty small cookers.  This one is actually pretty big and is from, it looks like to me, the 70's.  But it's BRAND SPANKING NEW in condition.  It still had all the paperwork in it, the original cardboard insert is on the bottom of the cooker to stop the stone from scratching up the bottom of the cooker and everything.  Retail back then for this thing?  89.95 by the little insert card that came with the cooker.

I never expected to ever run into one of these at the thrift stores.  I'd had one in my Amazon cart for at least two years to buy eventually, but 70.00 on the cheap was just out of my price range.  25.00?  I could swing that.

So, yeah, it was an awesome day on the thrift store shopping front this week.  How did you do?
Posted by Erika, "The Make Do Homemaker" at 9:29 AM