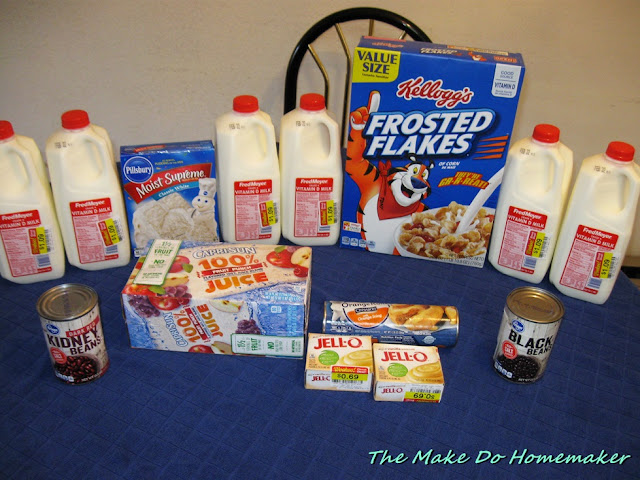 So, when it came to groceries I went over this week by 6.00 about, but really since it's AROUND 50.00 I'm shooting for, I'm good with that amount.

Shopping for this week actually started last Friday as I needed to run into town to put my husband's paycheck in the bank and I figured I'd head to Fred Meyer to get milk.  And I hit pay dirt!

While I was there I decided to see what I could get for free with a coupon that Kelloggs sent me.  I'd written to them about problems I had with Pringles being mis-colored and when the coupon came in the mail I was surprised to find that the coupon was good for pretty much every Kelloggs brand of item and maxed out at 5.00!

Instead of buying a 2.00 container of Pringles that my son would blow through in a couple of hours, I decided to look and see what else I could get.  I was going to get corn flakes, but then realized that the Frosted Flakes, one of my husband's and daughter's favorite breakfast cereals, was not only cheaper for the big box, but it also contained a decent more amount of weight in the box compared to the corn flakes.  So, I got those instead.

I also found that there were carts of mark downs out in the isle so I looked through them.  I was able to score cans of beans for .39 per can, packs of pudding for .69 per box, a thing of Capri Sun fruit punch for .69 (the box was dented, but no leaking of pouches!) and a boxed cake mix for .69.

I also got a thing of orange rolls as they are one of my daughter's favorites because it was her birthday week and because they were decently cheap there :). 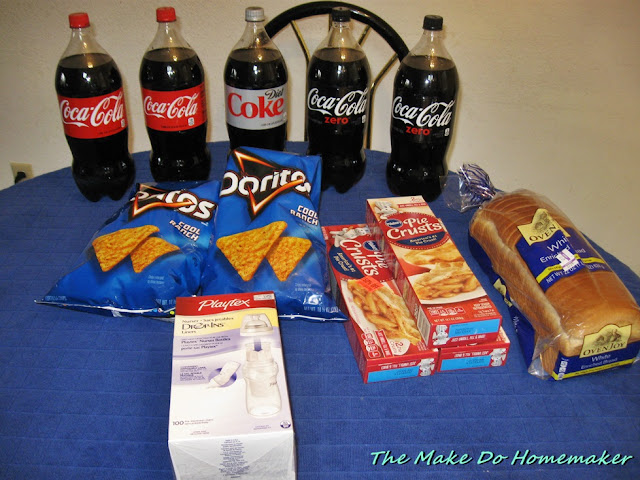 Early this week I went to Carrs (Tuesday since that is the last day their sales run) because I wanted to grab Coke while it was on sale for 2.00 per two liter bottle. I got a combo of Coke, Diet Coke and Coke Zero to see which one would work best with my son (basically which one he would be satisfied drinking but not guzzling).  The Diet Coke won the contest, so I'm going to start buying that for a while with a few bottles of Coke Zero added in (the son unit is getting pudgy from all the empty calories, so it's time for some weight maintenance).

I also desperately needed bottle liners, so I got those too, which are a pricey item when I have to buy them.  The bread was on sale for 1.79 per loaf.  My son loves hot dog buns, hamburger buns and soft "containing 97% air bread" so I got him a loaf as it was cheaper than buying hot dog buns this week.  Doritos were on sale for 3.50 per bag, so I got those as well while I was there as we needed them for his lunches and such.

My biggest find while I was there was finding Pillsbury pie crusts on reduced 50% off.  I looked at the shelf tag and found they were on sale for 2.50 per box, so once the 50% got taken off at the register they were 1.25 per box.  I'm seeing some meat pies (pasties) and such in my husband's near future to take for lunches (I am NOT great at pie crust.  I try, but I'm just not a great pie crust maker).

Not shown in the picture is a 20 pack of Diet Coke I had to get for my son's lunch coke as I didn't feel like hauling it up the stairs *laugh*.

Bright side, though, is that the milk, on top of what we already had in the fridge, definitely lasted out the week so I didn't have to pick up any extra milk during the week (yay!).

So, yeah, I picked up some extras this week with the pie crusts and such and that's what sent me over my grocery budget for the week, but I still think it was worth it.

How did you do on shopping this week?  Get any good deals?
Posted by Erika, "The Make Do Homemaker" at 1:04 PM