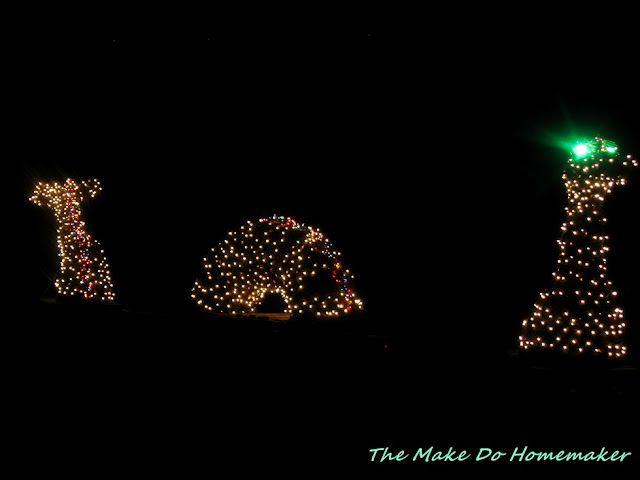 Well, as weeks go this one had been productive!  I managed to get the Christmas gifts buttoned up (I keep getting this nagging feeling like I wanted to make one more thing that I'm forgetting, but it'll either come to me or it won't), I took the kids to the "Bright Up the Night Display" at the Alaska State Fairgrounds (I'll cover that more in depth in a future post as it was a rather humorous story if nothing else.  One of the pictures is seen above) and I managed to get some housework accomplished.  We've actually had a lot of fun this last week doing stuff and about 99.9% of it was free (I'm not counting the gas consumption as "free" *laugh*).

I got my food and toys dropped off at the drop off locations this week too, so that got accomplished.  I managed to take pictures of the daughter's Christmas concert, got the pictures edited and saved and nothing bad happened to my SD card in between (the first time I had an SD card die, with about four years worth of pictures on it, was right after my daughter's Kindergarten Christmas concert.  I'm now overly paranoid after each concert to make sure I get the SD card backed up).  I dropped off about 80% of the Christmas gifts to my in-laws house where the majority of the family will stop by at Christmas or around.  The other gifts we were going to attempt to deliver today, but we had one family that had to go out and run errands and another that was sick, so those might be getting dropped off at my in-laws later in the week if I have to.  We shall see.

I even managed to juggle some last minute holiday problems.  My daughter's LED Christmas lights in her room died...well half the strand did anyway.  They were older lights that had no way to replace bulbs, and my husband after looking at them carefully just suggested we throw them out.  So, we did.  Instead of trying to go and buy her new lights this late in the season, I found a lighted garland I kept hoping to decorate the front porch with the last couple of years and hung that up in her room combined with the silver candy cane garland you can see in my "Gift a Day" posts as a Christmas-y background thing.  She loved it, it saved me 20.00 and we got it sorted.  Then her mini-Christmas tree that is in her room went out.  I didn't have any replacement bulbs, but I did have a brand new set of Halloween orange Christmas lights that I had gotten for 1.00 at the used store, so I used some of the bulbs from that for replacement bulbs.  Not the most cost effective solution, but it kept a little girl happy and in a Christmas mood, so it worked for me.

Man, I have to say this feels GOOD!  It's been such a terrible year for health for us and...well...a terrible year for everything else, that being able to get these things done without incident just makes me feel so relieved that they are done without problems.  I even made Christmas cookies today and my son was nice enough to nap while I did it, so I didn't have to worry about him trying to grab hot cookies off of hot trays.  How heaven sent is that???

So, onto this week's goals!


1.  Get through Christmas without anything bad happening, no kids getting sick, etc (not really an attainable by me type of goal, but I'm hoping God will help me out with this one *laugh*).

2.  Make some winter/Christmas themed cloth napkins (I really want to do this and am really hoping I'll have time *fingers crossed*).

3.  Decorate Christmas cookies with daughter (this and more Christmas baking is set for tomorrow).

4.  Blog about frugal winter themed activities (sorry this one is taking a while).

5.  Make recipes that have been screaming at my subconscious.  If they turn out, blog them.

6. Watch Christmas movies, listen to Christmas music, have fun playing with the kids.

And yeah, that's about the total of my goals for the week and I hope I can accomplish all of them :).
Posted by Erika, "The Make Do Homemaker" at 7:37 PM