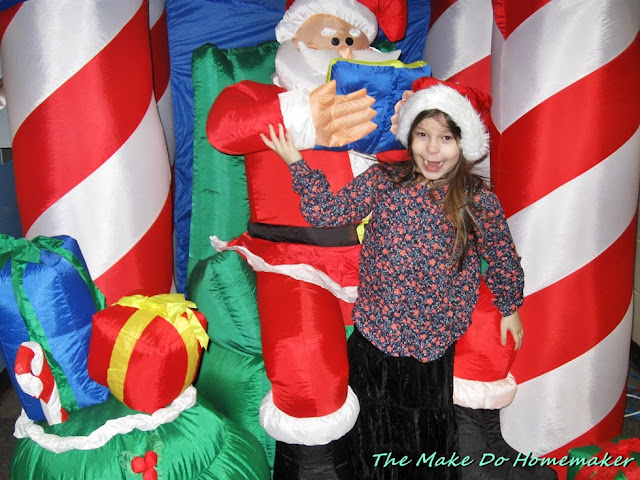 For a nice change of pace this last week no one got sick!  I slept awful as every time my son twitched upstairs I was out of bed like a shot and checking on him, but at least we got through the week with no stomach issues.  The kids got through all of the fun school activities that went on this last week and my husband and I were even able to go to my son's class party yesterday, which was fun.

We also got to attend my daughter's Christmas concert (my daughter insisted on posing with the inflatable Santa they had by the door, thus the photo above *laugh*.  I just thought it was so cute, I had to share :).  The school this year had all the grades performing at the same concert (normally they break it up into several performances during the week).  It was very crowded (we were some of the people in the "standing room only" category), hot and my daughter was on the other end of the gym from me.  Thank goodness for 13x zoom on my camera so I was able to get some decent photos of her despite the distance.

After the concert we drove around some of the local neighborhoods and checked out the awesome Christmas lights displays people had up.  It amazes me how intricate some of the light displays get anymore with the LED's.  My kids really, REALLY enjoyed the ride and checking out some fun Christmas displays.

And now onto the week on the money saving front!

1.  My daughter's teacher sent home a list of things she was hoping parents could provide for the Christmas party.  I looked down the list and most of the things she was asking  for were things we didn't have around the house because of my son's peanut allergy, but then I saw "marshmallows".  So the free marshmallows I got last week from Carrs went to my daughter's Christmas party so the kids could have marshmallows in their hot cocoa.

2.  I ended up staying home a lot this last week as I was working on house work and honestly trying to catch some sleep while I still could as I knew naps were going to be completely out as soon as my son got on Christmas break.  So, not going anywhere saved me gas and it saved me money by keeping me out of the stores.

3.  My husband and I went shopping yesterday to get groceries for next week as much as we could so I didn't have to try and go shopping with holiday crowds with both kids in tow.   I found pork loin roasts for 1.99 lb, which beat anything I've seen on pork the last little bit, so I picked up two to cut into roasts and steaks.  I almost didn't get two, but we desperately need SOMETHING to break up the chicken monotony right now and we were getting very low on pork.

I also found my son's favorite brand of chocolate chip cookie that's safe for him on sale cheaper than I've seen it in AGES, so I bought three containers for therapy and school to use as reinforcers.  Yes, it'll be a few weeks till he's back in school, but the cookies will keep.

4.  I worked really hard to make sure to only run full loads of laundry (like that's ever a problem around here) and dishes to conserve energy.

5.  Turning down the heat at night and before we leave the house has paid off in savings on the gas bill.  My electric bill might be insane, but at least my gas bill is about 50.00 lower right now than it normally is this time of year.

6.  I got one of my "Smiley 360" missions in the mail today.  In this case it's a mission that comes with some coupons for some free chocolate covered pretzels.  So, I'll be looking for those the next time I go shopping for milk early next week.

8.  My mom called earlier and told me about Jo Ann fabrics coming out with a calendar for next year that has all kinds of coupons in it.  I really wanted to get one, but 9.99 seemed like a hard price to swallow to buy a calendar when I could just go get a free one at the bank, so I kept going back and forth about buying one.

Then my mom called me this week and told me she mailed me one.  I really appreciated the gift, doubly so, as I will now have a calendar for next year too.  Thanks, mom!

9.  I took inventory of what I had in the house and decided instead of trying to bake extra stuff for my daughter's teacher and my son's independent OT, I instead decided to give them a jar of home canned goods instead.  Since it's two jars, I'll be able to replace those easily at the used store next year for cheap.  My daughter's teacher loved the wildflower jelly and I'm sure my son's OT will appreciate the cauliflower pickles.

10.  Today I dropped off Christmas gifts for about 2/3 of the extended family at my mother-in-laws.  These are people I know will stop off there at Christmas or a couple of days before the holidays, so they'll be able to pick up their gifts from us there.  This will save us the gas of running around trying to deliver everyone's gifts and will save those people gas as well as they don't have to worry about coming to pick up said gifts.

When I went out I combined trips with the rest of the errand running I had to do today to conserve gas and time.  It worked well.

11.  When I had to go into town earlier in the week to get gas (the closest place to use my fuel rewards for Safeway/Carrs) I stopped off with my loads of toys and food stuffs and put them in the bins at the stores.  All of the stores are basically nearly across the street from one another, so it didn't take any time and didn't waste any gas to do so.  While there I also swung by the post office (also right near by) and mailed off Christmas cards.  I felt good when I went to donate my bags of food only to find the food bin nearly overflowing with other donations.  By the time I got strategically stacking my food in the bin it was overflowing, but it was so worth it and warmed my heart that people are thinking of others this time of year.

And there you are folks.  Some ways I saved money this week.  How did you do?
Posted by Erika, "The Make Do Homemaker" at 1:55 PM