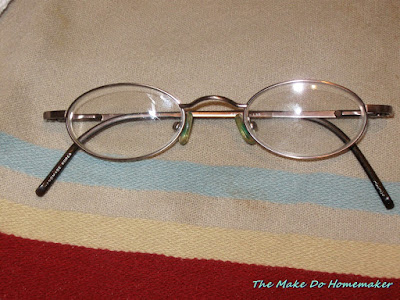 Yesterday I decided after being so sick for the last week and then having so much going on around here on top of it, I needed to get out of the house.  So, I went to the thrift store and found some awesome finds!

1.  The biggest find of the day, for sure, was a spare pair of frames (seen up top).  I looked down at the jewelry display and was surprised to have a pair of glasses that looked nearly identical to the pair I've been wearing forever (no, seriously, I've had the same frames since my freshmen year of college!) staring up at me.  I have been desperately wanting to go in and get a new pair of lenses put in my glasses as after six and some odd years my lenses are pretty scratched on my current pair, but my spare pair of glasses is currently held together by surgical tape and I wasn't relishing having to wear them while my good pair was in the shop getting new lenses put in, or worse, having to buy a new pair of glasses.

The frames, after discount (they were on sale 25% off), were 2.25 and are high quality (I did try them on and no, the prescription is no where near mine...it was worth a shot though).  I'm very very happy with them :).  Now I just need to save up a little money, go in and get an eye exam and get new lenses put into the new pair of glasses.  Then I can finally replace my old lenses in these glasses AND have a good pair of back of glasses in case I need them.  Life is good! 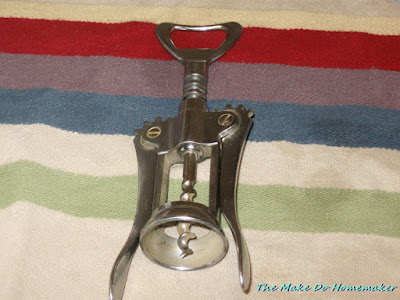 2.  Next up is a vintage solid brass with chrome plating Italian made corkscrew.  Really nice high quality corkscrew for .50 with a built in bottle opener as well.  Always nice to have around. 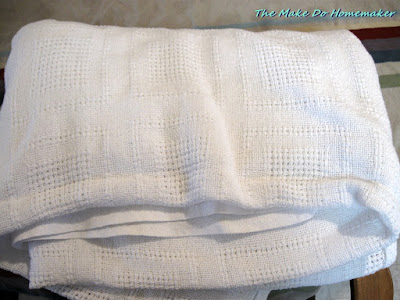 3.  A really nice 100% cotton duvet of which I have no idea how old it is.  It was 3.00 and honestly around here we can always use more blankets (finding room to store them is hard, but my son goes through a LOT of bedding on a regular basis, so it's good to be prepared).  I bought it, got it home and realized there was a rough patch on it where the cotton yarn had shredded a bit on one corner (someone had a cat as I had a lot of snags to fix), so I just took some 100% cotton terry material I had with a tight nap to it and made a patch on either side of the duvet, sewed through both patches to "sandwich" in the rough patch and voila!  A really nice blanket for 3.00 that is heavy enough my son will love to roll himself up in.  And with the cotton terry on there if I need to bleach said blanket it won't be a big deal. 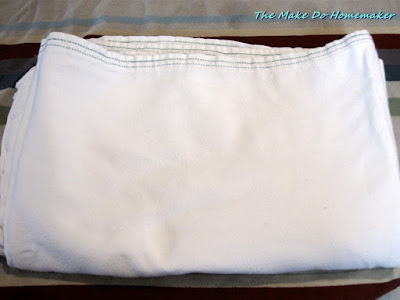 4.  I also found a 100% white cotton tablecloth. I have no idea how old it is, but I love the "vintage linen" type of feel to it.  And for 2.00 it was definitely worth getting just to have an extra white tablecloth anyway :).

I also found some various things for my daughter for Christmas.  Some "fancy" hair clips and a leotard for ballet in her size with the tags still on it on sale for 1.50.  Still on the hunt for a tutu in her size (I don't have materials to make one, so I'm KIND of hoping I'll stumble into one cheap so I don't have to worry about it), but feeling good about what I've found so far.

All said and done I got out of the store for under 20.00 and felt great about my finds for the day.

Have you found anything neat lately?

And EDIT:  Apparently my daughter actually has a tutu.  I completely forgot she had one *laugh*.  My sister-in-law had bought her one that was way too big years ago and I'd put it in her dresser drawer with other "too big for you" clothes in it figuring we'd pull it out at a later date.  She found it in her dresser about, oh, ten minutes after I posted this and came dancing out in it and some other clothing that made quite an ensemble.  But, yeah, she actually has a tutu.  That saves me time and money, so woohoo for that :).
Posted by Erika, "The Make Do Homemaker" at 9:13 PM