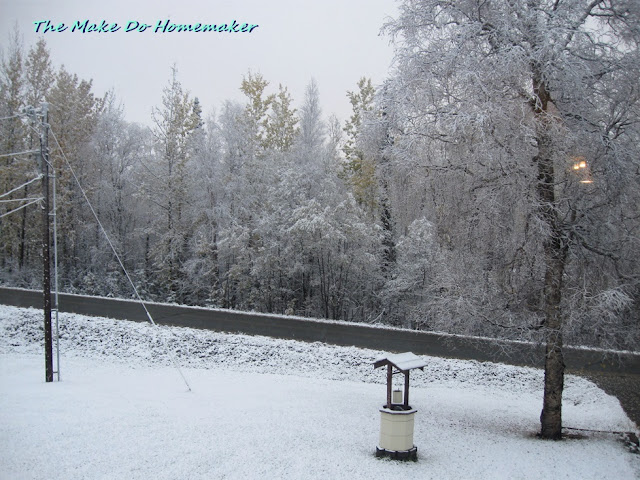 Day before yesterday, we awoke here in Alaska to a very unwelcome sight.  Snow!  Winter, it seemed, decided to show it's ugly head early this year.  Okay, so there are those up here who actually, you know, "like" winter.  Me, not so much.  I think snow is lovely so long as I don't have to drive in it and unfortunately with my schedule I'm always driving in it.  And I don't like what the white stuff does to my utility bills either.  So, it was a somewhat depressing sight.  My husband jokingly said, "It never snows in September!"  (a WWII reference), but I wasn't as amused as I should have been.

Luckily, some money saving things are helping to offset the onset of winter for me.

1.  I have been turning down the heat at night.  Yup, the house gets cold, but the kids have their own baseboard heaters in their rooms that run all night and both like to sleep with their doors closed, so I didn't see the point in keeping an empty center of the house warm during the night.  The thermostat kicks the heat back up around 5:30 in the morning (thank goodness for programmable thermostats), so by the time the kids get up in the morning (most mornings) the house is once again warm.  I've noticed a definite drop in our gas consumption on our bill doing this, so "so far so good"!

2.  We went to a new allergist for a consultation on my son this week.  I talked to her at length about my son's peanut allergy and how it baffles me as I know that he ate peanuts ALL THE TIME before he was diagnosed three years ago and he's been accidentally exposed more than a few times throughout the years (usually at school...he grabs things and while they try to be careful things happen).  And taking peanuts out of his diet, or anything else for that matter, didn't help his skin one iota.  The doctor looked at his records and tended to agree with me that his main problem is probably environmental allergies the way his eczema is so bad, gave me some good tips and a new medication to try to alleviate his itching and we're going to be going in for a peanut tolerance test later in the month.  I pray he passes that test as well as I feel he will because that would end our dietary restrictions (at least allergy related ones) when it comes to him, which would be wonderful.  I'd love to be able to let him eat peanut butter again (which he loved) and get some protein back in his diet.  We'll be talking about allergy shots after we have the results of that test, so fingers are crossed on this one and prayers are sent in the hopes that this is meant to be.

3.  My husband needed to pick up some parts for his truck today, so we went to our local Chevy dealership to get them.  Usually this isn't exactly cost effective as dealerships are on average more expensive, but we were a part of a class action lawsuit against the dealership for fixing loan rates (which we bought our car right in the middle of the time period) whether we liked it or not (it was one of those "we're adding your name to this list" types of deals).  We ended up getting a check and a giftcard for services or parts along with it for 350.00 as part of their settlement.  This was years ago that the lawsuit occurred and my husband has used the giftcard very frugally throughout the last couple of years to get parts for the vehicles.  The giftcard is set to expire in a couple more months, so my husband went and got a few parts for his truck he needed.  We only have 35.00 left on the card now, but my husband figures he'll be able to get a few small things with what is left or a significant discount on some other parts he needs, so it'll work out.

4.  When our PFD's came in yesterday we knew some things we wanted to get done with it.  I went into the stores armed with a clipboard the last few days to make sure we got the items we needed without a lot of satellite items to eat up money that we didn't need to spend.  We went and got permanent registration on another one of our vehicles, which will save us a lot of money in the long run.   I had carefully picked out Christmas gifts for the kids months ago and was careful to make sure to watch the prices to make sure that we were getting the best deal possible when our PFD's came in to get the gifts ordered.  A couple of the gifts are sitting kind of high price-wise right now compared to how low they've gone before, so I'm going to sit on them in my cart for a while and see if they go back down in price.

5.  I just realized today that I've been wearing the same winter jacket since my first year of junior high (which was, to say the least a long time ago).  I have tried other jackets to replace my ski jacket, but they just don't work as well.  I felt the wind through the inner shell of the jacket today, but instead of worrying about getting a new jacket, I put the outer shell of the jacket on and got a can of tent water proofing spray at the store which I'm going to use on the children's and my winter jackets.  This not only will help to help with water repelling on the jackets, but will also help to seal up my jacket's seams and make it less likely to let the wind make me cold.  I'm really hoping to get a few more years out of that jacket as I do love the jacket.  With the outer shell on it seems to be working just fine, so that was a relief.

6.  Carrs was having value packs of chicken on sale today for 5.00.  They didn't have a weight limit imposed on the sale, so my husband and I dug through all of the value packs and picked out the five biggest packages of chicken drumsticks and thighs (we're dark meat people).  I'm going to split the packages (which are currently taking up about 90% of my fridge tonight *laugh*) tomorrow.  This will see us through a lot of meals.  For a 25.00 investment, it was totally worth it.

7. My husband and I went out for a date lunch yesterday as we were in the middle of running some our errands.  It has been years since my husband and I actually had a sit down lunch or dinner together so I really enjoyed it.  Maybe not the most frugal thing, but it did nourish our relationship, so I consider it worth the cost.  Course, we won't be doing that again anytime soon, but we enjoyed it anyway *laugh*.

8.  I fixed my daughter's shoe and my husband mended his boots.  "Shoe Goo" is such a wonderful invention!  It has saved me so much money over the years!

9.  By going through my pantry and cupboards carefully while making my shopping goals list, I found things I forgot I had while doing it, which helped me to cross things off of my list because I already had them.  It saved me from over-buying when we went out shopping so I was very glad I did it.

10.  I have been enjoying watching the series, "Coal House at War" on You Tube the last week.  I haven't gotten as far as I would like in the series, but so far I'm finding it very entertaining to watch.

11.  I took inventory of Christmas gifts I had while my kids were at school this last week and found a few things I forgot I had gotten.  This will save me work when it comes to making Christmas gifts in the coming months, so I was definitely thrilled to mark some people off of my list.
Posted by Erika, "The Make Do Homemaker" at 8:35 PM