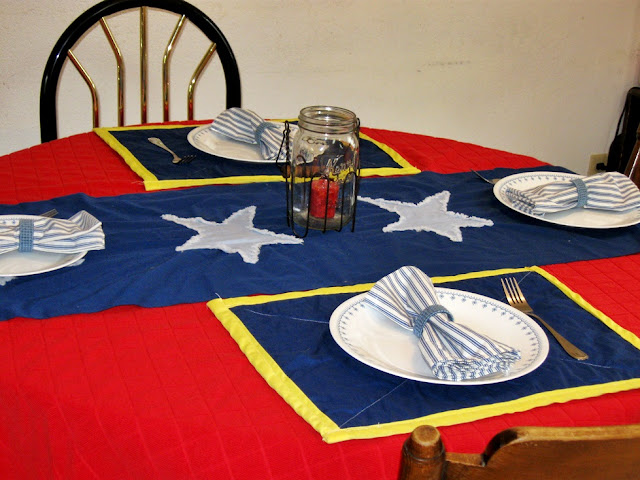 This week actually saw a decent week in productivity around here.  I still had to run the air conditioner a couple of times just to pull the humidity out of the air, but the last couple of days we've seen a blessed reduction in the heat wave we've been having.  Now I'll just pray for some rain to help the poor fire fighters who are fighting fires in our state.

So, anyway here's what I got accomplished on my goals list this week.

1.  I had a good amount of productivity on the sewing front.  I made two table runners (one you can see in my Frugal Friday post further down the blog) one of which is a patriotic tablecloth for the Fourth of July this coming weekend.  I was rather proud of the star table runner, as one of the things I wanted to avoid was trying to sew the stars on one at a time with complicated seams, so I just made the stars out of denim and went with a fray starred effect.  And it worked fabulously!

I also made four place mats (only two are seen to show off the table runner a bit better), four cloth napkins (seen), a few handkerchiefs and two dish towels.  I've been needing to get the place mats, napkins (still have more of those to go), handkerchiefs and dish towels done, so it was a good feeling to get those checked off my list.  I still have more to go, but at least I made a dent in the pile of things I needed to get done.

I also made four napkin rings (seen above).  I keep looking for cheap napkin rings at the used stores but haven't found any that I was interested in getting, so I figured, "What the Heck" and made some out of good old fashioned plastic screening and yarn.  I've been making things out of plastic screening since I was little, so I was able to make four napkin rings in an hour with a break in between to get my son drinks and such.  I want to make some more out of different colors (I have a huge package of plastic screening I got, oh geez, two years ago or so?) so that I have a versatile selection of napkin rings.  I might get creative if I can find some different colors of yarn around here as well.

2.  I planted turnip seeds where the other potatoes I had planted didn't sprout and I'm waiting to see if the seeds take or not.  Since I'm having to just water them by hand, vs. letting the rain do it's voodoo and I'm not sure if the birds get in the garden or not, we'll see how well it goes. 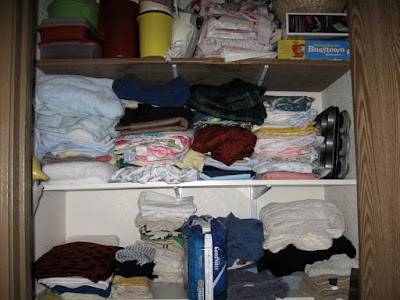 3.  I made some progress on my hallway closet and sewing area.  I put the majority of bulk cloth I had into the hallway closet, kind of just pushing things out of the way to get it done, but it's in there.  I managed to get the majority of the sewing area cleaned up as well.  For the time being I'm kind of using the top of the TV cabinet we got as a mini cutting table as I just couldn't find a good way to reorganize the room to get the yard sale stuff out of the way without making the room impossible to play in, which wasn't going to fly with the kids.  So, I'll just make do with the area the way it is for the time being.

And yeah, that's about all I've gotten done this week.  Doesn't seem like much, but I was happy with the work I got done.

My goals for this week are:

1.  Hopefully muck out 40' van some more (weather just didn't agree with my plans this week, or the kids).

2.  Work on shopping goals for next month.

4.  Make some more cloth napkins and some more handkerchiefs.

7.  Bake bread, cookies (I keep promising my daughter that we'll get to the chocolate chip cookies and I just keep finding other things that need to get done first.  I really need to get this done).

8.  Harvest kale and prep huge amount in fridge for storage in freezer.

9.  Make out menu for 4th of July and work on fun themed thing for the holiday.

And there you are folks.  My goals for this week.  Here's hoping I can get some of it done!
Posted by Erika, "The Make Do Homemaker" at 5:47 PM