Monthly Shopping Goals for May and Garden Plans 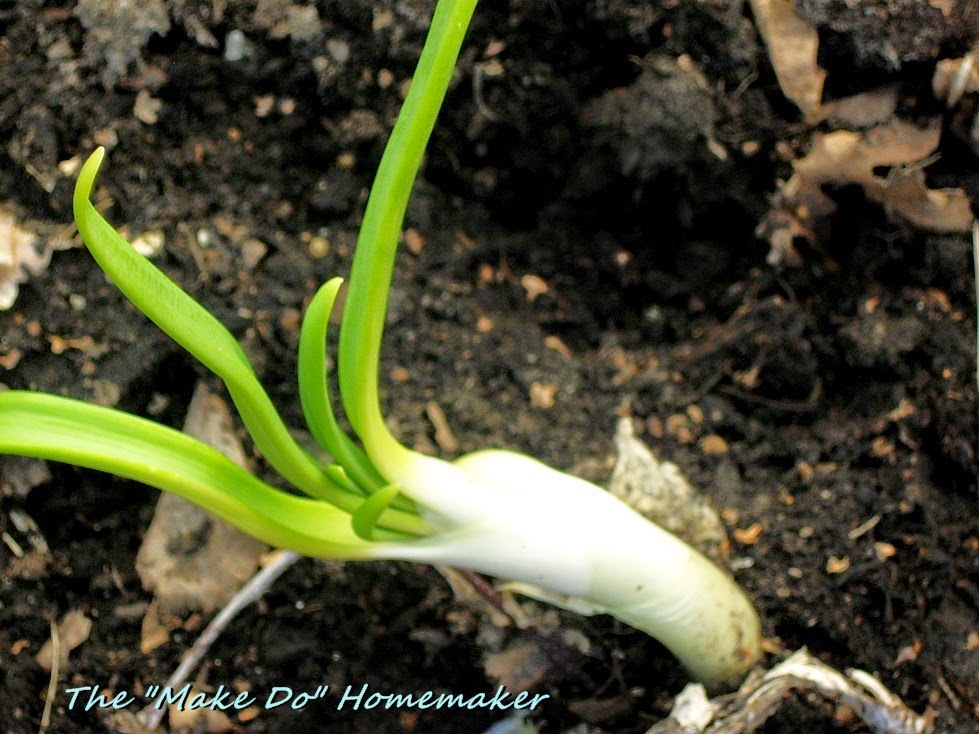 Wow, this is a few days late, but it was a weekend where my poor husband has been just running into one problem after another.  Then, my children and I are all fighting colds, which is not good this close to the end of school (so don't want them to have to miss anything fun this time of year).

But, here we are in May and so I sat down and figured out my garden plans and monthly shopping goals.  So, here we go!

When we moved here three years ago, I was lucky enough to get some raised beds on the side of my house that the previous owners had put in.  The last couple of years I've put in loads of different things, but cabbage always seemed to take up a decent amount of room as I like to can sauerkraut in the fall.  But, last year we had a bumper crop when it came to the cabbages, so as a result I still have about 12 pints of sauerkraut left in the pantry.  So, I got to use that as an excuse to plant some different things ;).

So far in my beds I have planted some garlic bulbs, some sprouting potatoes (locally grown ones that just sprouted in my pantry, here's hoping that works well) and some onions that I took from an onion that was turning into a house plant in my pantry (seen up top is part of that bulb.  I was able to get four sprouts from the one onion).  I topped it off with a few herbs as well, such as parsley.  I've also planted herbs in my two wooden planters I have at the front of my house.

I have a raised bed in my front yard that is under a birch tree, so whatever I plant there has always had to compete with the tree roots for attention (previous owners put that in too).  Whatever I plant in my front yard also has to contend with spider mite infestation (it's been bad every year).  I somehow manage to keep it located in just the front yard, but any plants I plant in my front raised bed, I have to worry about.  So, I just said to heck with it and planted some chocolate mint direct in the ground, some spicy oregano (a clearance sale find at Lowes for 1.00) and a pineapple sage plant (an intriguing find at the nursery...unfortunately it's already not doing great, so we'll have to see if it survives or not).

I've got thyme, parsley, sage, oregano and basil in my planters and some in my garden on the edge.

Today I went and spent 20.00 at the nursery where I got two tomato plants (early producing varieties are the only ones I've had luck with in Alaska), some kale (I was hoping to find chard, but didn't see any), some lettuce and some marigolds (to beautify the yard a bit).  The tomatoes and lettuce I don't plan on planting for about another week, just to be on the safe side, but I'll be putting them outside during the day to help shore them up to the weather a bit.

Lettuce is a big deal for my garden every year.  I love being able to get lettuce throughout the summer and make fresh salads.  This year I got a variety of red lettuce.

I still hope to find someone who is willing to part with three rhubarb plants once they really start growing here (in the next month or so they'll start to take off).  I had two rhubarb plants on my property when we moved here.  One the previous owners put in a low part of the yard, so it doesn't get great drainage, which doesn't seem to make it happy and it has to fight the undergrowth for room to expand.  The other rhubarb plant I had was on the edge of our driveway and then my husband rearranged the driveway to work on our motor home last summer and well...alas my poor rhubarb plant I barely got a chance to know you. 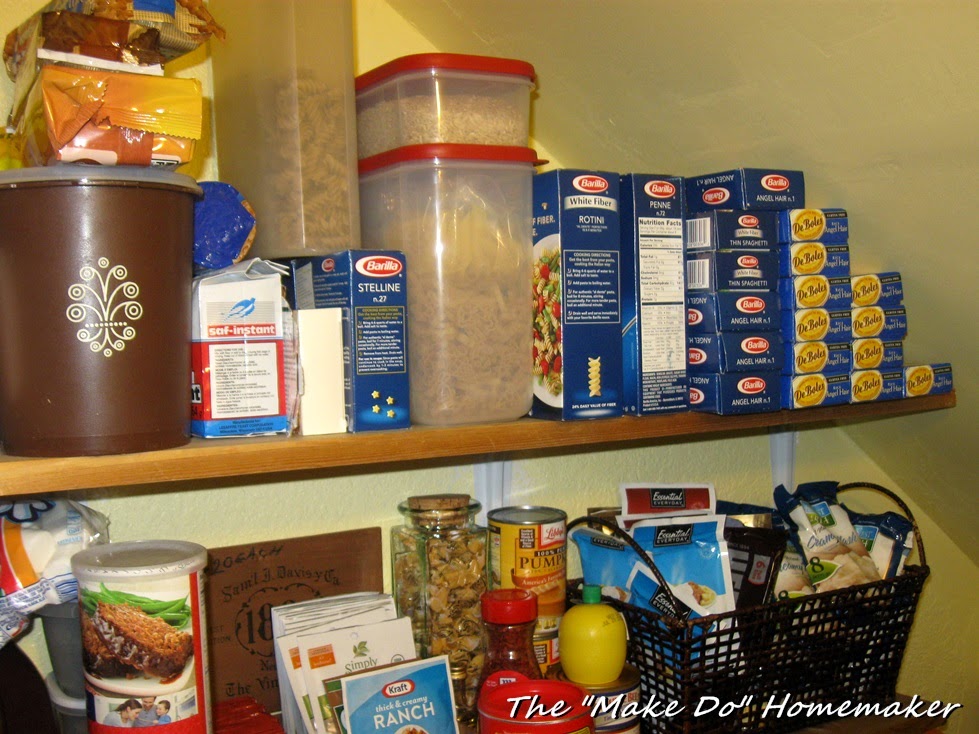 Shopping Goals for May:

On the shopping goals front for last month, I was actually able to make my shopping goals plus added a few things on.  I was able to get 12 boxes of pasta added onto my Amazon.com order, was able to find clearance meat cheap this last week (which was, in a nutshell a Godsend as that will stop us from losing our minds eating chicken every day).  I was able to get the 25 lb bag of flour I needed, as well as a bunch of other groceries at Fred Meyer with my 7.00/35.00 store brand coupon that they had sent me.  I had no idea that Fred Meyer had some really cheap things in their generic line of products!  I was able to get the aforementioned flour, tea, tortillas, generic store Spam (Spam's not one of my favorites, but makes a passsable ham salad and can be used to make things like fritters), eggs, milk and other products and left spending 50.00 after coupon.  It was a good day that day.

I finally decided to pass on getting a flat of mandarin oranges as it would have cost me 10.00 plus to get there and that was a lot out of my weekly grocery shopping budget.  Instead, I stopped in a few weeks in a row and just bought three cans of mandarin oranges each time I was there.  I ended up with a total of six cans, which would be half of a flat, and that'll last us for a little bit, so I figure that will have to do for now.

I'm glad I was able to get so much added to my pantry last month as for the next couple of months, I'm going to end up having to live off the pantry a lot again to try and save money somehow.  It's been like the fates have been against me saving money (I'll get more into that on my Monthly financial workup post), but I'm determined to make this work.

So, be prepared for some pantry friendly recipes coming at you in your near future.

I DO, however, have a couple of shopping goals to accomplish this month.  Not many, but some.


I had plans on getting some pudding mix and stuff on Amazon this month, but when I realized how tight money was going to be, I cancelled those items.  Luckily, God provided for me by a sale for buy one get one free on pudding the store and I found ONE flavor of vanilla pudding that was .99.  I had a .50/1 E-Coupon loaded on my card and I had a couple of catalina coupons (one of the coupons that print at the register) for .50/1 as well.  So I was able to get six boxes of pudding far less than I would have gotten on Amazon by stacking the sale with the coupons.

So, my shopping goal on Amazon for this month is reduced to...

I really want to make this goal work as I ran into the above canned crab even cheaper than it is now (which is still darned cheap when you consider how much a 6 oz can will cost you at least 3.69 on sale at the stores).  I'll be paying a total of 25.00 and some change for it, but it will be worth it as I am using canned crab more and more for crab cakes, soups and fondues.

Other than that I'll be keeping my eyes out for fresh produce sales to help with canning later or to just have to supplement the pantry shopping I'll be doing.  I might also try to get a few more cans of generic canned Spam to use in dishes.

And that's it for shopping goals for the month.

Hope you got your goals worked out for the month as well!
Posted by Erika, "The Make Do Homemaker" at 3:50 PM