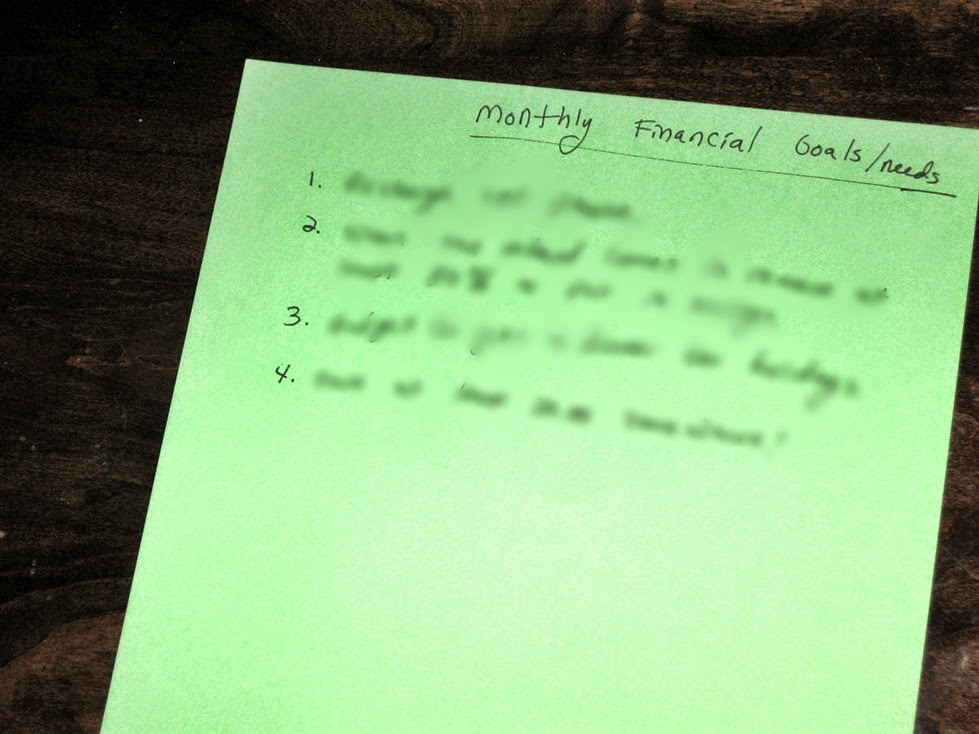 March is over.  Finally.  Thank God.

Although, now it's a new month of bills to make and somehow try and recoup from the mass financial losses of the last couple of months.  This is going to be fun.

But, anyway, here's the list of things I had wanted to do in March.

Overall, I accomplished two of the three goals.  I was able to save the money from my grocery budget to make the car insurance payment two weeks early, which it was a relief to get that out of the way.  Although, that also ate into what little "cushion" I was able to save, so I'm stalking my checking account like an overzealous teenager who has just spotted her favorite rock star to make sure that the mortgage and a credit card payment (our only credit card left except for the dental card we're paying on) clear the bank with at least a little money to spare.

Saving as much toward the 1000.00 for the root canal my husband was getting just wasn't viable.  Between him suddenly needing an abscessed tooth removed, which cost us a lot and the car insurance getting paid, we were suddenly down 1200.00.  And that was BEFORE I was even THINKING about saving toward the 1000.00 for the root canal.  Of course, typical of medical bills, the 1000.00 is now nearly 4000.00 (ugh), on top of the dental bills we already owe.  It's going to be a long year.  Blah.

Anyway, despite all of that depression, things have to get accomplished around here, so I worked out what I want to get done in the way of financial goals this month.


1.  Continue to adhere as strictly as I can to the 50.00 per week grocery budget so that I can save as much as I can toward the dental bills.  This should save us about 300.00 at least per month to use toward bills (taking into account the monies I might have to grab to get some shopping goals accomplished).

2.  Start the Weekly Savings Challenge (back log it to the beginning of the year and play catch up).  This might take a few months to get caught up, but I'm pretty sure I can do it.  I need to put SOMETHING into savings at this point...otherwise all of this scrimping and saving money is just going to get too darned depressing.

3.  Put 5.00 away into each child's savings accounts (because it's important).

4.  Pay bills.  Ahead of time if possible just to get them out of the way and decrease my anxiety levels.

So, there you have it folks.  My financial goals for this month.  Here's hoping for a really good month *fingers crossed* so I can get this stuff done!