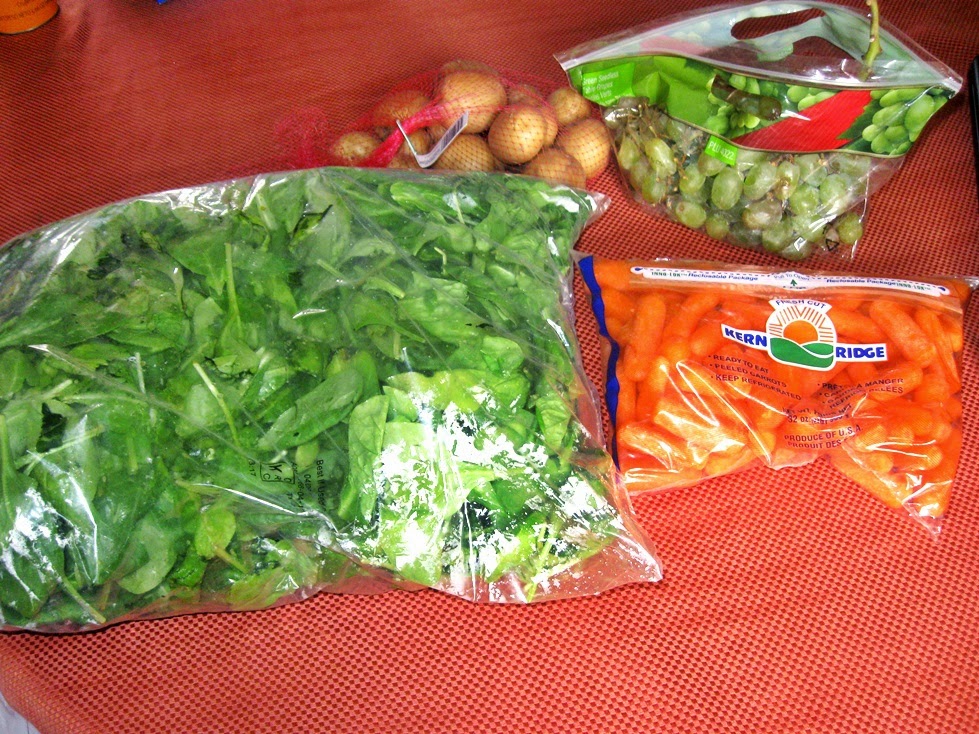 It has been a roller coaster of a week around here.  Things were going pretty well on the money saving front and then my husband hit some construction yesterday on the commute into work, wiped out one of the tires my sister and brother-in-law had given us, and after two tires (one to replace the really in bad shape spare) we now have 325.00 on our Sears card...the most money we've had on that card in years.  Depressing.  But, at least my husband got tires and wasn't hurt.

But, there was some good thing that happened this week too, so let's focus on those, shall we?


1.  I was able to score the veggies and fruit seen up top for a little over 5.00.  My sister-in-law turned me onto a local discount outlet and one of the things they deep discount is fruits and veggies from local restaurants and such.  So, we were out in the area last Saturday and decided to stop by and see if we could find anything.  I was able to get...
All for 5.00.  I got home and immediately processed the spinach by blanching and freezing it as some of it was going slimy (which is why it was 1.00 I'm sure).  I managed, after cleaning it thoroughly a few times and processing it, to get 8 side dish sized bags worth of spinach in the freezer to use for meals later.  A truly awesome find!

2.  I made all of our meals at home, which saved us money.

3.  I had a 7.00 off of a 35.00 purchase to Fred Meyer's to use on their generic store lines (which is really rare to get coupons on generic store items period, let alone a high value coupon like that).  I had been holding onto it for months, waiting for the right time to use it, and since this was double rewards points week at Fred Meyer, I figured now was a good time to use it.  I was so happy with my purchases.  I was able to get eggs, milk, a 25 lb bag of flour, tea, snacks, some bacon and such and walked out spending 50.00 for a lot of shelf stable foods and things I actually needed.  I felt good about what I spent that day and got some shopping goals for the month accomplished while I was at it.

4.  Now that spring and summer are finally approaching, I figured now was the time to start making the kids clothes for summertime.  I made the following this week... 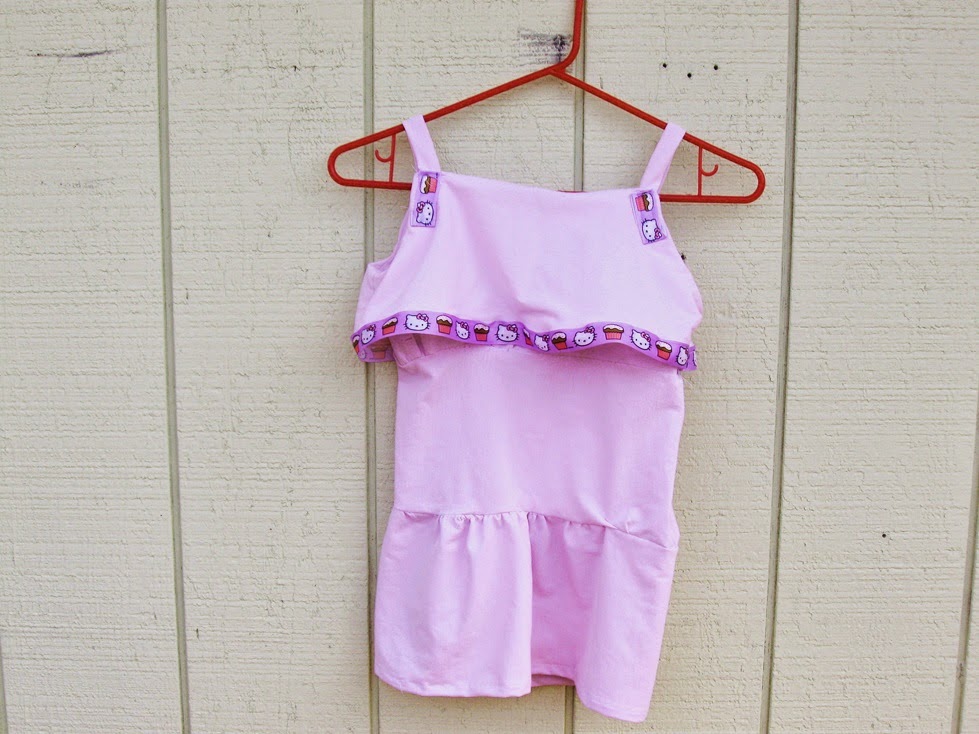 A summer dress with a flowing type of top to it.  This was a pattern that went awry on me due to poor directions that came with the pattern, but I was able to salvage the "shirt" pattern into a dress for my daughter.  I now know the shortcomings of the pattern, so I THINK I can make it into a decent dress and shirt pattern in future attempts, but we shall see. 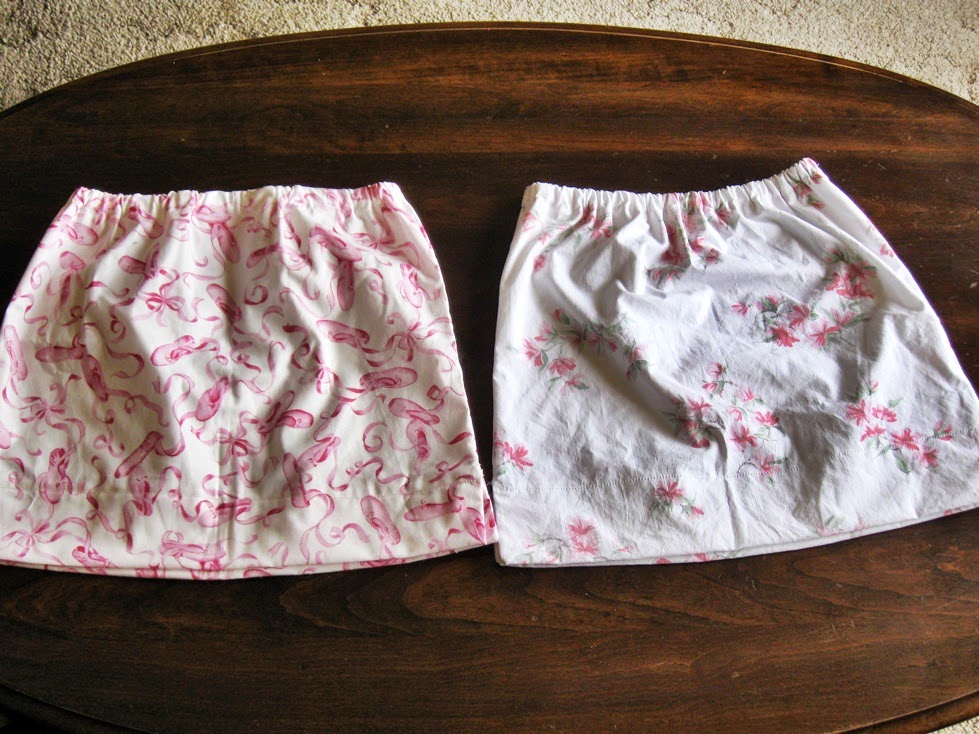 Two skirts.  I used Simplicity 9611 Easy to Sew Girls Casual Wardrobe pattern for the skirts, although the original pattern called for a tie string waist and I went with a elastic waist instead.  It was more user friendly for my daughter and honestly, a lot less work for me.  I like how this pattern goes from a size 7 to a size 16 (at least the one I do does), so it'll come in handy over the next few years.  And the skirts were super quick to put together too, so that was a nice bonus.

The skirts came out super cute, too.  You can't really see it in the pictures, but I had some fabric I bought at a used store that had ballet slippers all over it.  It was an adorable fabric, but I didn't have much of it, so this ended up being the perfect project to use it on.  The other skirt I made from a sheet that I had gotten for free from a yard sale (it had been the last day and they just offered us stuff for free when we stopped to look at the end of the day).  I went to use the sheet for fabric to find a few holes in the sheet as well as some old mildew stains, but was able to work around it to make the skirt.  Sad as I was hoping to get a lot more workable fabric out of the sheet, but I might bleach the remainder and see if I can get rid of the mildew stains to the point I could use the fabric that is left.  Here's hoping anyway. 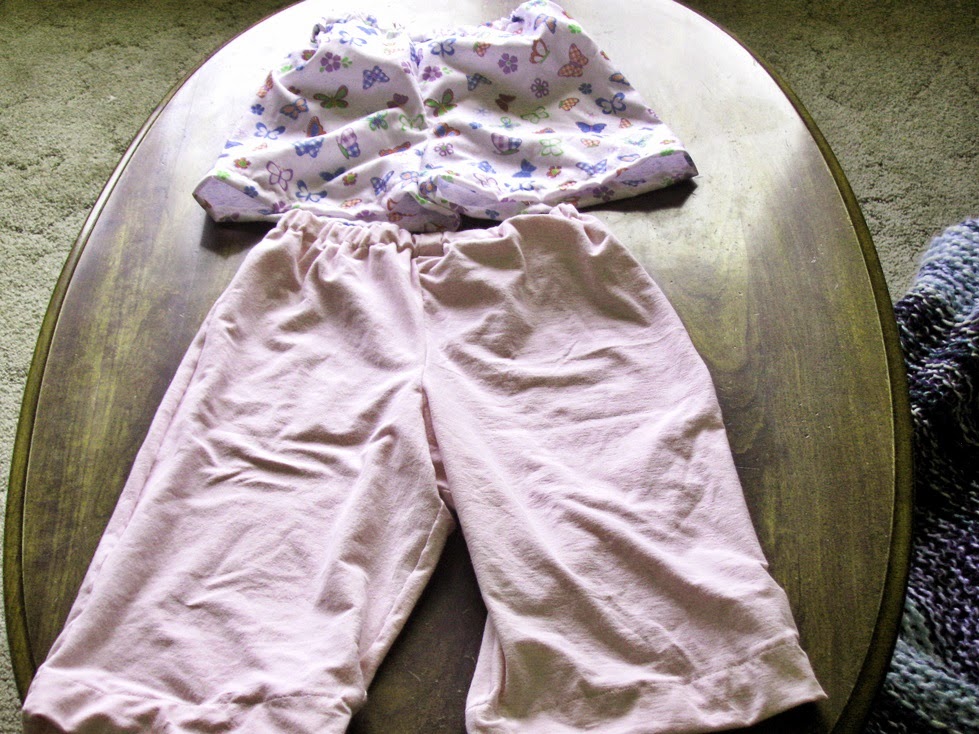 I also made her a pair of capris out of the same fabric as her dress, so she can wear the pants under it and use it like a tunic shirt if she doesn't want to wear leggings under the dress.  And I made her sleep shorts out of a lightweight sheet that I found at a used store a while back that had a cute butterfly pattern on it (they came out super cute too).

The pants and shorts I made using Simplicity Child's Pajama Pattern #5809 .  I have gotten quite the soft spot for Simplicity patterns the more I sew (very user friendly), but I LOVE LOVE LOVE this pattern!!!  Not only does it give you options for more traditional pajamas (which I plan to utilize for Christmas if my son is still in a size 8 *fingers crossed*), but they have a shirt pattern for a t-shirt, both summer and winter type of PJ's, a slipper pattern AND sleeping bags!  I got my pattern at a used store for .10 a while back and I'll tell  you what, I wouldn't trade it for the world!

To make capris I just hemmed the pants really high up.  It worked well.

I still have to make my son a couple of pairs of sleep pants for cooler weather, but I feel good with what I accomplished.

5.  I shopped sales and used coupons to get the most value for my dollars that I could.


And there you have it folks.  My frugal adventures for the week.  How did you do?