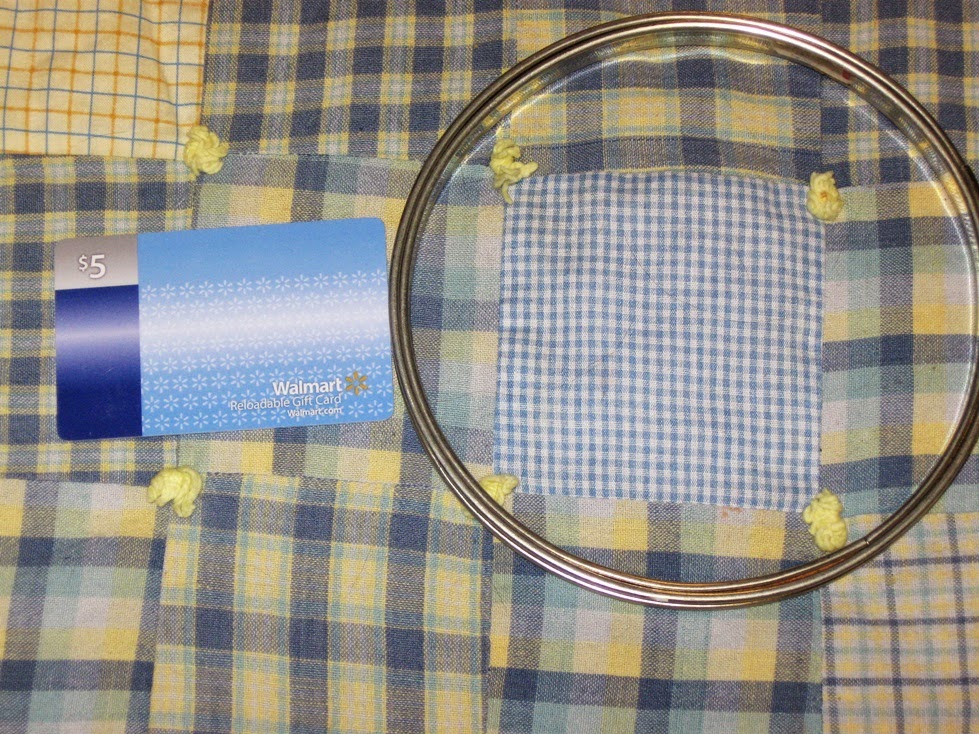 This was a week where I actually felt good about the money I saved, but in different ways.

And some of those ways were...

1.  Probably the most exciting "bonus" of the week was getting a flyer in the mail for a local car dealership promotion where if you got three cars scratched off you had a "winner" card (which we all know all of the flyers were winners).  You had a chance of winning up to 25,000.00 or a couple of gift cards to local shopping centers and stuff.  Everyone who showed up with a flyer, though, was assured at least a 5.00 giftcard to Wal-Mart.  So we went and dealt with the sales pitch.  And got a 5.00 giftcard (which we were expecting.  Our luck doesn't run big ;).

2.  I found .50 at a local parking lot and had been holding onto it for weeks (I know, isn't that sad?) hoping to find something cool maybe at a yard sale.  But, I found something very cool at the thrift store for .50.  A metal embroidery hoop.  I've had this on my yard sale and thrift store list for a few years now as they aren't made any longer, and this one was perfect.  It even had the cork lining in tact.  For .50.  So, after the money I'd found in the parking lot the embroidery hoop was free (people give me a hard time sometimes about looking down when I walk, until I find things ;).  Good day that was. 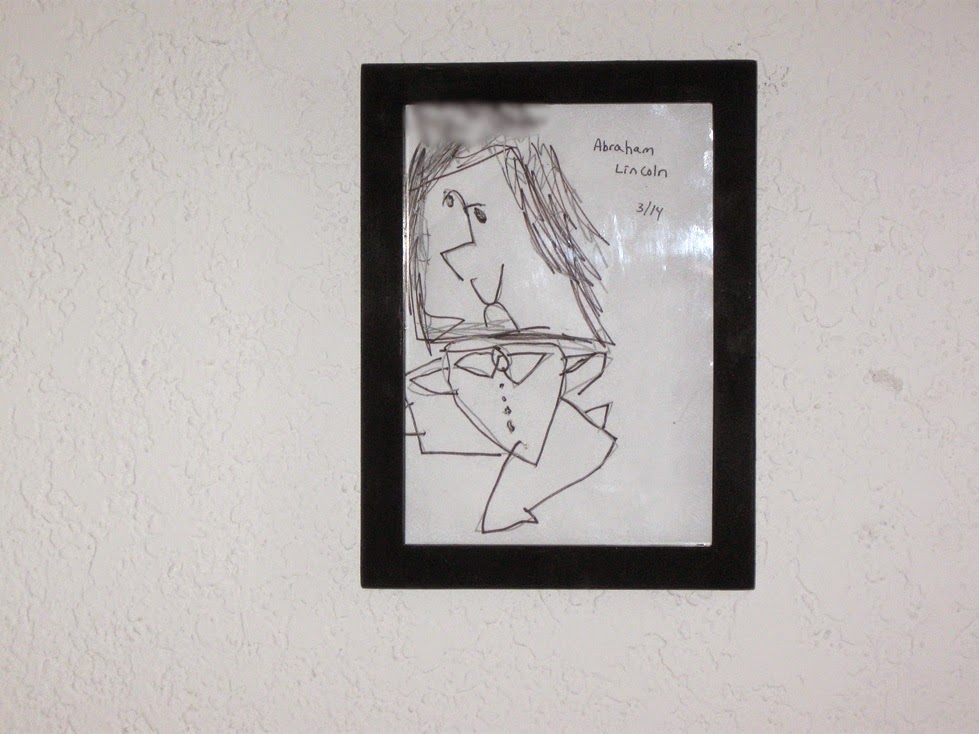 3.  One of the things I love to do is decorate the house with my kid's artwork.  My daughter had made some adorable portraits of George Washington and Abraham Lincoln when she was in first grade, so I really wanted to frame them, but waited for a good price on frames.  I found some at a thrift store for .25 a piece, but the reason they were so cheap was that they were a REALLY bright shade of blue.  So, a couple of coats of black acrylic paint that I had around the house from various other projects and voila!  Nice new black frames to put the artwork in.  They look cute with the rest of the artwork.

4.  I cooked meals at home, which per usual saved us some money.

5.  Took parsley I had in the fridge and made Parsley Honey so now I have "honey" which I was running out of to eat with meals, so it was a cool experiment to be sure.

6.  I bought my kids a couple of things they needed at the used stores that I didn't feel confident making (like bathing suits).  10.00 later and both of my kids have two swim suits, I have a couple of sheets to turn into pajamas for summer, etc.

7.  I mended a couple of pairs of pants that I had, so I could use them for cleaning around the house (they are pretty beat, so they aren't really pants I wear out of the house unless I'm in a hurry).

8.  We went to my daughter's school for a function tonight where we got to see some museum exhibits (the Anchorage Museum came out with some cool stuff) and kids could get free ice cream and a book when it was over.  My son couldn't have the ice cream (peanuts), but both kids scored a book out of the deal and my daughter got an ice cream.  My mother and father-in-law came with as well to have some fun.  There were lots of experiments for the kids to do (my son liked the electromagnetic light globe thing) and lots of things to see.  And it was completely free through the school.  It was a pretty cool event!

9.  When I went to the used store today where I got the kids bathing suits and stuff, I decided to lock up my car afterwards and just take a walk.  It was windy, but beautiful out and it felt good to just walk without worrying about everything for a little bit.

10.  I have started to actively follow Freebie Friday on Fred Meyer/Kroger's coupon site and since I had to do shopping today anyway, I got a free iced tea out of the deal with my E-Coupon.  I drank it while on my walk.

11.  I shopped sales, used coupons and such when I went shopping, which saved me some money as well.

So, there are some of the ways that I saved money this week.  How did you do?
Posted by Erika, "The Make Do Homemaker" at 8:20 PM