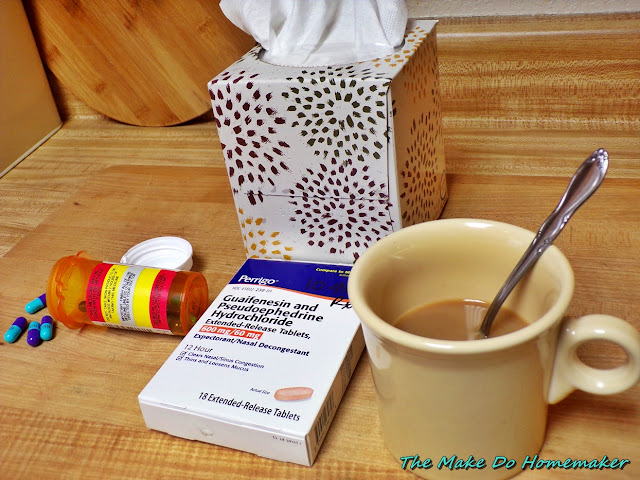 The last two weeks we've been sick.  Again.  This time the son brought home the cold and was down with it all last week.  The husband, who has managed to skate through most of the colds and things this school year, came down with it next.  Remarkably he and the daughter were down for only a couple of days and then they rebounded from it.  Me, not so much.  I went down with it hard, started to get over it and then it came back, which I knew was not a good sign.  I was so horribly fatigued all weekend I was up to doing not much of anything and I crawled through the beginning part of this week.  When my chest started hurting and my cough started sounding really bad I decided enough was enough and it was just time to suck it up and spend the money to go to the doctor.  Luckily the husband was up to driving me to the doctor or I honestly don't know how I would have gotten there.  I was really, REALLY out of it.  I honestly think after an entire school year's worth of viruses and other stuff my body had just plain had enough.  I mean I haven't felt good since Valentine's Day...that's not a good thing.  After an exam and a chest x-ray to make sure I didn't have pneumonia (which the doctor was worried about) I'm now on antibiotics, a decongestant and lots of water and tea.  My first round of antibiotics was yesterday and I have to say that I'm feeling better than I have in months, which is definitely an improvement, and now I'm just trying to rest today even though my nature is screaming at me to get stuff done.  So, for a change, I finally have some energy to blog.  Yay!!!!

You know it's kind of sad to write that.  Yes, I've been so horribly tired and sick the last couple of months I have had to dig up energy to do anything at all and blogging was on that list.  It's nice being able to think clearly instead of through a fog.  I think I was a lot sicker than I thought.

Anyway, this week's post is early, but is late from last week, so I figured I'd just combine them together.  I'm working on other posts for monthly goals and shopping goals (yes I have long lists for both).  Unfortunately, the frugal accomplishments post for the last two weeks is going to be kind of short as I just wasn't up to doing much at all, so things just plain didn't get done.

But, let's get to the short list I have!

1.  The Monopoly game this year is now ended, but last week was double (or triple, who knows) game pieces week, so going shopping I ended up with just piles and piles of Monopoly game pieces.  I wrangled the husband the daughter into helping me go through them all to see if we won anything good (note:  We didn't), and then I spent a good couple of hours online redeeming tokens and spending them on the second chance game site.  I managed to score two 5.00 grocery giftcards the last couple of weeks doing that (since they opened that section back up) and those are now sitting in my purse waiting for the next time I need to go shopping.  I redeemed what I had left for a free box of tissues (seen up top there) and a free bottle of water.  In the piles of game pieces we got we also got a few freebie coupons.  I redeemed a free box of water crackers, a free loaf of french bread, a couple of free bottles of water, a free can of green beans (it was actually for a free can of vegetables, but I picked green beans), a couple of free bagels, another small thing of sour cream (which I'm hoping that stuff will stay good for a while if you don't open it as I have a bunch of it now) and a free Refreshe Ice drink.  I THINK I got them all written down, but I might have missed something there (note:  I was out of it).

Overall, shopping went alright.  It probably could have gone better if I'd been well, but I was able to buy meat that was already defrosted and ready to use when I realized I was getting sick, so we had meatloaf one night, spaghetti another night (which I then forgot about it and had to throw away as I was so sick, which still upsets me...I have wasting food) and lamb roast (which I threw in the crock pot).  With the lamb roast, since I have a bunch of canned corn to use up (I still have a bunch from when my in-laws moved that they gave me and I want to rotate them out for more current cans) and some russet potatoes that were going wrinkly (by the way the potato basket is working AWESOME!  I'm really happy with how the potatoes aren't going green and they aren't sprouting that much), I decided to make Quick Potato Corn Chowder.  I added some Bacos to add a bit more flavor and then threw in a bit of garlic powder and a few seasonings, but overall as a base recipe it was really good and the husband actually really liked it (score!).  We had free bread and oven roasted potatoes as our other two sides (in case the other family members didn't like the soup).  Overall it was a pretty simple meal and came out well.

2.  Speaking of the Monopoly game a friend of mine sent me a nice little care package and she included some more Monopoly freebie coupons, which is awesome :).  It was definitely an upper to a pretty miserable and sickness driven week.

3.  I FINALLY got a refund check from the hospital for my overpayment back in October!  The head of the billing department called me again, apologized profusely, and issued another check as the one they sent (supposedly) back in March hadn't cleared or anything, so they stopped payment on that check and sent me another one (I still have my doubts they sent the first one, honestly, but whatever) and it came in this week.  I immediately went and put it into the bank.  I'm so very glad to get that whole super huge mess out of my hair and resolved and BOY if I EVER have to use that place again I am NOT paying them a cent until insurance gets done, no matter how much they try to bully me.  I'm done with that for sure.

4.  I got some more Spring cleaning done (albeit not much) the last couple of weeks.  I got the stairs deep cleaned and shampooed them once.  I still want to go over them again, but hey progress is progress!

5.  I rearranged my kitchen drawers to accommodate losing the old knife drawer because the oven door sticks out more than my old oven.  What I have now works alright, although I do feel the pinch of having one drawer gone in the kitchen.  And I am wondering how long it will take before I stop smacking my poor oven trying to, once again, open the old knife drawer like a dummy.

6.  My son actually found some shows on Amazon Prime that I didn't know we could get for free.  He's been having fun watching old "Word World" episodes, which hey I'm not going to complain about as maybe he's moving forward on communicating :).  I have noticed him babbling more complex sounds of late.  I keep hoping he'll talk, but I also am just happy that he's finally got the whole concept of nodding his head yes and no and what it means.  It's made offering him choices on things a lot easier and stops him from getting frustrated so much.

7.  The new medications the psychologist put the son on are working well!  She upped his Risperidone to a higher dosage disintegrating tablet, which is made by the same outfit that his old pills he used to take well are made by!  He might gag a little on one once in a while, but he's taking the new pills SO MUCH better than the orange pills he was on.  I'm thrilled as it really does help his concentration and mood to be on the higher dose and it is a huge relief to me to not panic every time I have to give him medication on whether or not he'll keep be able to gag the medicine down or not.

8.  My husband traded out his skills for some free swim lessons for the kids.  The lady who owns the pool is closing it for the summer, so they only have the rest of this month for lessons, but it has been nice not stressing about how to pay for swimming lessons the last bit and I am grateful for how far the kids have come in their swimming skills while being in Ms. Tina's classes.  She's got Alvah swimming to the point that he's swimming well in the Special Olympics this year and is actually actively enjoying the water, as is Armina.  I never thought either one of them would get to the point they would enjoy swimming, so I really am grateful for how far they have come :).

And there you go folks.  That's about it that I can remember at this point.  How have you all been the last couple of weeks?  Okay I hope?
Posted by Erika, "The Make Do Homemaker" at 10:46 PM