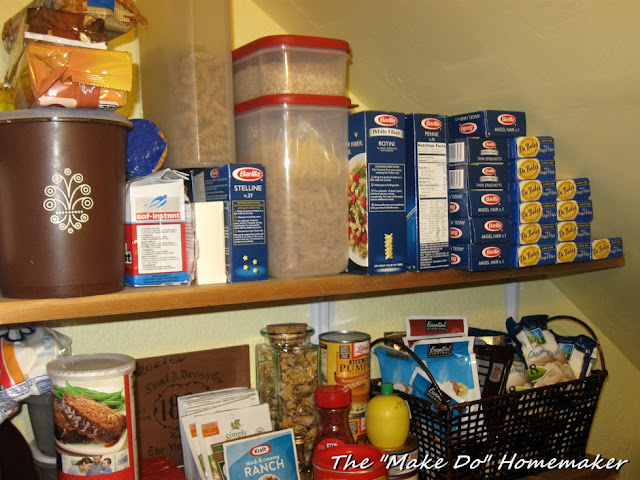 This time of year, shopping goals become "goals" in the relative sense as "goals" are more like, "Hey, you need to get this!"  With Thanksgiving quickly approaching, I decided to give my new "system" a run for it's money.

Basically my new menu and shopping "system" was supposed to work like this.  At the end of the previous month I would sit down and plan out a basic menu for the month ahead.  Nothing TOO specific (as with me a really specific menu is destined to fail and fail big), but just a general sense of what we would be eating that next month.  The few areas where I wanted to plan kind of more in detail was when it came to desserts and things like breakfast dinners.  This way I could sit down, figure out how much eggs, flour, milk and other staples I would need down to the cup (or egg as the case would be) and then I could just plan on going through that much staple types of foods at a minimum, so could figure out when I needed to replenish them before I was "running out" of them.  For instance a 5 lb bag of flour usually gives me about 11 to 12 cups of flour (I think...I wrote it down, but I'm not getting up to go and find my paper), I could figure out a dozen eggs as needed, etc.  Any milk I would need for baking on top of what we normally drink per week (with a milk loving son and a milk loving husband...we go through 3 to 5 gallons a week) would be factored in and I was HOPING to pick up enough groceries to last us through two weeks without much effort by figuring it all out.  Even things like eggs I could pick up a month's worth at a time, or close to, I figured, thus saving me having to potentially purchase something at a higher price if I found a sale on something cheap before the new "month of system" kicked in.

It was a system destined for failure.

What I failed to factor in was that while it all worked FABULOUSLY on paper, there were a couple key points I was missing.  One was time.  With speech therapy twice a week, psychology appointments, a husband having to have dinner on the table at 4:30 every day so he still had time to get ready for work before taking off for the night on top of me having time to get his lunch packed for the day and growing children who would decide that while they loved a food one minute and then decide they could not care less about it the next while going and consuming copious amounts of other foods...well things were already not going well and I hadn't even really started yet.  Already the "system" was getting thrown off and I had to go and make an additional trip to the store for more, or different, foods depending on what was going on.  Or quickly had to just throw something different than I had even come close to having planned on to get my husband out the door on time for work (which happened more than I care to admit the last couple of months).  Then, due to lack of time during the day (with other appointments on top of speech therapy or if I needed to do an errand or something), dessert schedules quickly started getting screwed up if I had all my other ducks in a row on something for dinner and so I ended up with more eggs than I needed and things as I didn't have time to bake or prepare a dessert when I had planned.

So, yeah...it was a nice thought and my brain keeps seething with a way to make it all work right.  I have tried the once a month menu thing and found that I just can't stick with it no matter how hard I try as I like to cook too much.  Preparing a menu for a month ahead just seemed like it took all the creativity out of cooking for me and that just made me unmotivated to follow the menu very quickly.

Now, I have found that the figuring out roughly how many eggs I would need is KIND of working out ("kind of" is an operative term *laugh*), as if I have extra eggs I find that I just use them to make egg salad, french toast, or custard or something, so they don't go to waste (having chickens did do me a favor in that department as I have more experience using up eggs now).

So, anyway, if I can ever get the "system of menu planning to grocery shopping flow chart" figured out so it works well, I'll let you know.  For now it's just "Get this, it's on sale.  Redo menu as needed.  Wing it." with an overall budget worked out for groceries.  At least that "system" (if it can be called that) is working, so until improvements are made to the grey matter running the show, it'll have to stand.

So, back to this month.  This month's shopping goals are going to focus a lot around Thanksgiving and getting ready for it as here in the US our Thanksgiving is the last Thursday in November.  Since my husband's place of work is open 24/7 he's working on Thanksgiving this year.  My daughter, bless her heart, sat there looking sad when she heard me tell her that as I was trying to figure out the logistics of getting dinner on the table early, but not too early (so the husband had time to get plenty of sleep, but also having time to eat a big meal and actually have time to enjoy it and time with the family as well) on Thanksgiving and she made a comment that it didn't seem fair that dad would have to leave right after the meal.  She then looked up and smiled asking, "Mom, could we have it another day when dad can be home instead of on Thanksgiving Day?  So he can enjoy it to?"  I sat there a minute and said, sure we could, as my husband has Friday that week off.  My husband was happy and touched that my daughter thought of him when I asked him if he'd be okay with it (I knew he would be).  So, we'll be having Thanksgiving a day late this year :).

Other goals are just things I need and have been waiting for a great sale for.  Like butter.  It will go on sale for 2.50 per lb once in a while right now, but it seems like lately there's always a limit of 2 on it when that happens, so I'm KIND of hoping that they have a decent sale on butter coming up so I can stock up again as the prices at the bulk store on butter...well it's kind of getting ridiculous and is almost as expensive as picking up butter at the regular prices at the store.

So, anyway, let's get to the goals for this month!

Regular Stores:
Done!  I got these at Carrs this week as they are on sale and cranberries tend to start selling out up here as Thanksgiving approaches.
Done.  I had a few quarts of home made in the freezer from cooking down vegetable scraps, but I got a few quarts for a cheap personalized price at Carrs this week as well...this is another item that just disappears from the shelves as Thanksgiving approaches.
Bright side is that I am stocked up DECENTLY well on things like Cream of Mushroom and Cream of Chicken soups, so I can save money not having to buy those this year and I'm good on canned veggies and fruit, so yay for that.

Normally I'd be all gung ho to go and get a turkey when they are on sale for cheap when you spend a certain amount (or free if you spend like 100.00 or something in a shopping trip), but I am kind of torn about it.  On one hand, it is cheap meat if I spend 50.00 on other things as you can get the turkey for .50 lb about, but on the other hand...I already have a turkey in the freezer, turkeys SHOULD be on sale through Christmas pretty much and well...we'll see how money goes.  Right now it's tight and spending money on a turkey I don't need RIGHT NOW just doesn't seem overly practical.

So there you are folks.  My shopping goals for this month.  How about you?  Got anything you need, or want, to get this month?
Posted by Erika, "The Make Do Homemaker" at 8:42 PM