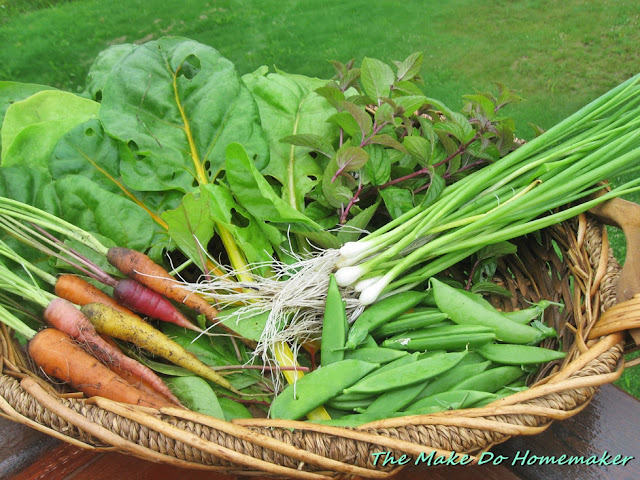 Wow, it's been a busy week and a super busy weekend as we're working on getting everything ready for my husband to go out of town tomorrow night.  I'm already dealing with a depressed daughter and a cranky son and dad hasn't even left yet.  So, so not looking forward to this.

First a quick garden update.  The summer garden, with the exception of any peas that might still grow (which so far, so good) is pretty much done for the year.  I harvested what I could out of all beds earlier in the week (seen up top there).  The chocolate mint grew kind of this year, but not great.  All I could harvest I have in that picture, although it IS still growing, so I'm hoping to get more before the growing season is officially done.  I'm hoping next year will be better for it as it took FOREVER to get started this year and I'm not really sure why.  I'd hate to think that it will do this poorly year after year when it did so well it's first year (last year).  I guess only time will tell.

I pulled all the bunching onions as with how much rain we've been getting they were starting to turn yellow (that and the colder weather I'm sure).  I sliced them up and put them immediately into the dehydrator.  The chard (the best leaves are actually on top of that pile, unfortunately) got cleaned really well and blanched and frozen, same with the peas (with a few reserved to have in salad).  I dehydrated the mint and put it into a jar to add to tea this winter when I'm feeling under the weather.

The weather is growing colder and leaves are starting to fall from the trees already.  Looking around I see fall occurring pretty much everywhere.  So, of course, my mind is immediately turning toward the impending winter with lack of snow tires yet in my budget and I get a bit worried, but I'm hoping that the snow will hold off until October (which is when our "normal" winter starts, usually, although the last three years had spoiled us all).  Soon things like carrots and potatoes and other root vegetables will start coming due for harvest and sale, so I am hoping to pad out some stores with cheap local produce and I'm counting down the days until good cider is once again available in the stores as I actually put some money aside to pick up some this year (yay!!!!).

In the meantime, let's get to what I managed to accomplish this week for money saving things shall we? 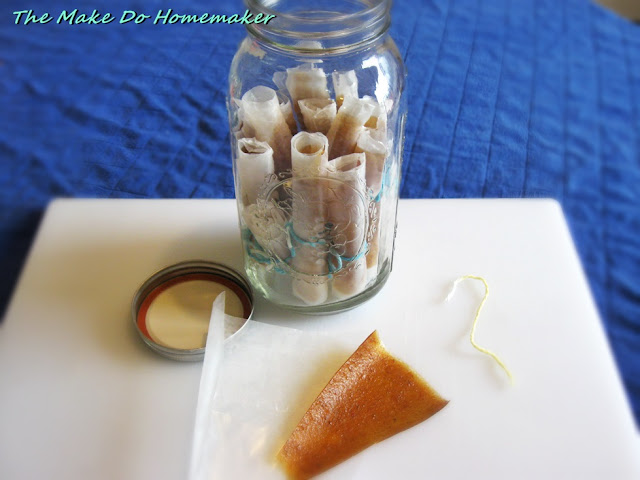 1.  I made rose hip fruit leather earlier in the week (seen above).  I finally had enough rose hips to make it  (you need 6 cups of rose hips to make 3 cups of puree about and 6 cups of wild rose hips?  Yeah, that's a lot!) and I am still harvesting more as I find them ripe in the yard.  I'm still trying to figure out a way to climb down into our "ditch area" by our driveway as I have a TON of them down there, without killing myself...that's the hard part *laugh*.  My daughter tried a piece of the leather and liked it, so I was doubly happy with that.  I made 3 cups of rose hip puree and mixed it with 3 cups of applesauce from the pantry, added a bit of honey to sweeten (since the applesauce was unsweetened too, so it was a bit tart from the rose hips) and then dried.  The cooperative extension service said fruit leather, if properly dry, should keep for 4 months to a year if you keep it in a cupboard, the cooler the better.  The way the weather has been, the front of the pantry is definitely remaining cool, so I'm hoping I can put off storing it in the fridge or freezer for a while and just let it sit on the shelf.  This will be a great nutritionally loaded snack (rose hips are packed with vitamin C), to add to my daughter's school lunches.

2.  I baked the outback copycat rolls this week.  The recipe was just a disaster from step one, but the frugal part (to me) is that I saved it!  For one, the dough comes out REALLY dense, like super duper dense, but only calls for 4 tsp of yeast.  I'm not sure if part of this was due to my freshly ground wheat flour (I ground it in my coffee grinder as I didn't feel like pulling out my manual grain grinder), but I had bad feelings about the yeast right away.  Fast forward 2 hours later and the dough still hadn't risen.  At all.  And I even used instant yeast!  So, I dumped all the dough back into my stand mixer, mixed in another tablespoon and a half of instant yeast, mixed it all together and waited.  A half an hour later (which seriously shows how dense that dough was!) and the rolls were ready for the oven.   The rolls were a bit sweet for my liking, although my daughter loves them and says they tasted like cake (which gives you an idea of the sweetness level I suppose) and they ARE very filling with how dense they turn out.  But, I have to say while I might tweak a whole wheat roll recipe to add a little molasses and cocoa in the future, I'll just skip this recipe.  I'm suspecting these might turn out lighter with store bought whole wheat flour though as the flour is more processed and thus might give you a lighter dough...maybe?

3.  I hit sales this week harder than I have in a long time.  I actually had budgeted out some money for pantry "pump up" as I was calling it (and yes, I actually wrote it down that way in my column *laugh*) and I used all of it Carrs on Wednesday to get tons of things super cheap that will last a long time in the pantry.  My son's favorite popcorn was on sale for 1.25 a box if you bought 5 of them, and I had a bunch of 1.00/1 coupons (bwahahahaha!) that Jolly Time had sent me for being a customer.  So, I was able to get popcorn (I bought the only 6 boxes they had on the shelf) for .25 a box!  Wooohoo!!!  That was a high to my week for sure as I like to send the microwave popcorn packages into my son's class as a treat for him and the other kids as all the kids in his class are popcorn lovers.  At home we mainly eat home made popcorn (popcorn with olive oil and just ground up kosher salt for popcorn salt) so it's a real treat for him to get microwave popcorn in class (and it is a good reinforcer for him to do work :).

4.  I mended various holes in blankets and comforters this week.  Still have a ton of mending to do, but at least some of the bigger and bulkier items are done now. 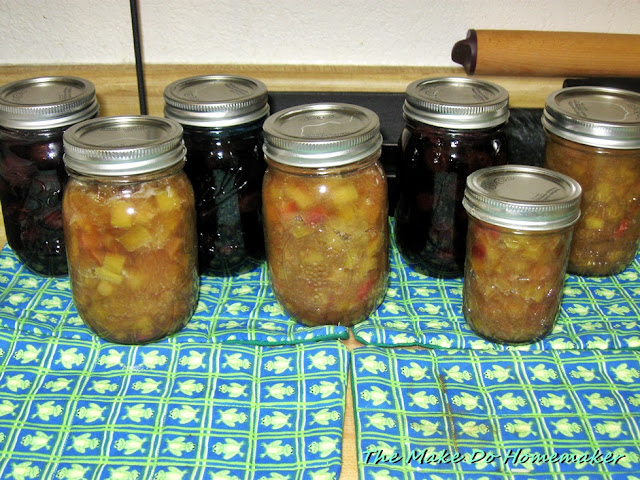 5.  I canned the rest of the rhubarb and the cherries from the freezer this week.  Once the cherries were canned and cooled a bit, I was able to give one can of cherries to a friend of mine who works seven days a week and loves home canned goods, but obviously doesn't have time to do it herself.  She was super duper thrilled to receive it and I was happy to give it to her as she works herself HARD (I took the picture after I had given her the jar of cherries, so there were actually four jars originally :).  I am amazed how many cherries I got this year.  I've got cherry pie filling, cherry jam and tons of just canned cherries in the pantry now.  I'm kind of in awe as cherries are usually a major luxury item around here.  So to have so many of them...I feel like I have gold bouillon sitting on the shelf instead of cherries.

6.  I continued to work on rearranging the pantry and kitchen this week and it is coming together slowly but surely.  It's not costing me anything to do since all I'm doing is moving things I already have around.

7.  It has been kind of cold, wet and dreary this week, but so far I've managed to keep the heat turned down and we haven't been too cold without it kicking on.

8.  I have had a blast on You Tube this week when my kids wouldn't go to bed.  I watched "Tudor Monastery Farm" all the way through and actually found it really fascinating to watch once I got into it as the group covers a bunch of different skills and things of the age.  I have to admit my favorite part was watching how to build a book from start to finish as repairing books has always been on my "skills to learn" list and I'd love to get into doing that one day.

I also started watching "Secrets of the Castle" which is just as fascinating to watch as I've always LOVED castles since I was a little kid.  Not so much about the romanticism surrounding them, but just how solid and huge they are and what had to have gone into building them.  So watching them work on building one?  I could watch that all day.  It's really a cool series.

I stopped myself from watching "Tudor Monastery Farm Christmas" until...well...closer to Christmastime.  I'm hoping to maybe convince my husband to burn some of the Farm Christmas specials to DVD so I can play them for my daughter as it's a really sneaky way to teach her things.

9.  While watching the specials, to avoid wasting time not doing anything (since I'm not sleeping and need to stay awake) I knit or crochet.  It helps to keep my hands busy and convinces me I'm doing something useful while I'm watching things.  I have found that I had about four stores of yarn around the house when I went searching for fabric, so I have started conglomerating them together and making projects out of them.  My goal is to get my yarn down to one big basket full of yarn.  That will be enough to make a decent sized project, but without taking up tons of space all over the place.  Like the project I'm working on now is baby yarn and I had a GIANT skein that was taking up a good portion of a drawer.  Better to be knitted into a project and give me back the room it was taking up.

10.  I tightened up some screws on my daughter's chair (she has the "odd man out" chair at the kitchen table that we have to replace one that was broken).  I have to do this periodically or it gets really loose, so I was happy that I remembered to do it before it got really wobbly.  Note to self:  Ask husband for spare square head bit as I don't have one for my screw driver.

11.  My husband has continued to pick raspberries over at my mother-in-law's for me.  I'm thrilled as I am pretty sure we've got enough or nearly enough to make jam now :).  Anything after this can be used to make muffins and things during the winter, so I'm hoping to get more, but still.  Yay!!!

And there you are folks.  Some of my frugal ways this week.  How did you do?
Posted by Erika, "The Make Do Homemaker" at 8:06 PM