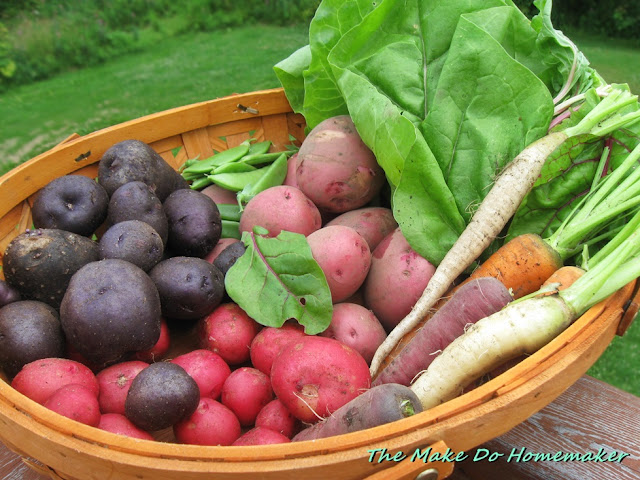 Well, this has been a productive week, despite some set backs.  I had numerous issues with getting the bulging tire fixed on my car (it was still leaking after we got the new one on, got that fixed and had to get sensors reset, etc) and my son was sick this week, but at least I was able to get things accomplished despite that.

So, onto the garden update.

The turnips are sprouting up and then just as soon as they pop up they are getting chewed on by something.  I don't think it's slugs as the marigolds planted near the turnips, which the slugs seem to LOVE, are actually starting to come back after I thinned the lettuce.  And there aren't slug trails near the seedlings...there's just chunks taken out of them.  I'm going to try spreading some coffee grounds in a perimeter around the space and see if it's ants eating on the plants or not as we've had a bad ant year on top of everything else.

I researched when to harvest potatoes to refresh my memory and found that the potatoes in the garden should be ready to harvest.  So, I went and dug them.  I am glad I did.  I had a lot of little potatoes on two of the three plants, but I also found that they were planted on top of a HUGE rock that's in that bed which I didn't know about.  So, that definitely impacted the growing of the potatoes.  I made a note of where the rock is as it's too big to dig up and I'll plant lettuce or Chinese vegetables on top of that space next year.  In the meantime I planted more turnip seeds and more carrot seeds after amending the soil in the bed just to try and get some small veggies out of the garden before the ground freezes. 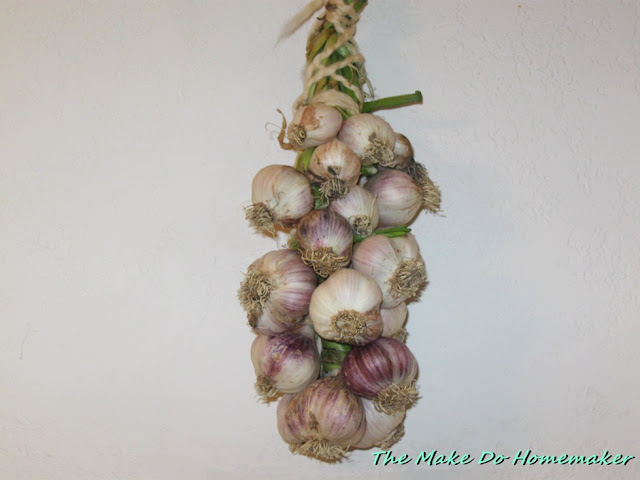 While I was digging potatoes I realized that the garlic was definitely ready to harvest as the garlic plants were pretty much dead, so I dug them too.  And was in for one tremendous disappointment as the garlic was small.  Really small.  I was online a few hours after harvesting it and found out that our local produce stand had bundles of garlic for 3.00 per bundle so I went and got enough for (hopefully) a year (garlic quality up here is TERRIBLE no matter the time of year, so this year I decided to buy local instead).  Believe it or not, the entire bunch of garlic you see is only 3 bunches that I got plus my five (yes, five, I ended up with more than I thought when I dug the bed...glad I didn't pull everything up that I thought was grass *laugh*) bulbs near the top (that's where you are supposed to put your smallest bulbs).  I found that due to the weather everyone's garlic wasn't doing great this year, so that made me feel a bit better, but I also found that the variety of garlic I had planted (I got it at Lowes) wasn't really recommended for planting in Alaska because of it's long growing season and not liking cold weather, so one of the bulbs of garlic I bought is destined to be broken into cloves and planted in the garden for next year.

I came home after buying the garlic and looked up a tutorial on how to braid garlic online so I could have it all in one place.  Fast forward to 30 minutes later with me having six bulbs all nice and braided looking only for the directions to say, "And continue to add 3 to 4 bulbs at a time per bunch and end with a nice looking bulb".  Now mind you, the instructions up to that point were really in depth so picture me sitting there, holding six bulbs of garlic complete with stems tightly and me using some colorful language as I tried to figure out the rest of the pattern.  So, the final results are above after a lot of pseudo braiding and knotting on my part was done.  It would probably make a real blooded Italian flinch, but it'll get the job done, I hope *laugh*.

The results of this week's garden haul, minus some more peas, is up top.  I am pleased as punch with how the carrots have done.  I have never been able to make more than stubby little 2 inch things that are supposed to be carrots, so to pull real to life, honest to goodness carrots from the ground is beyond thrilling :).

Past that let's get onto the rest of the money saving things this week!

1.  I ended up with a sick son this week as he was down with a cold, so overall we didn't go anywhere or do much of anything until today when we went errand running to go to the bank and the store.   So, I definitely saved gas and money by not leaving the house.

2.  I finished one Christmas gift this week (more on that later) out of materials I already had around the house.

3.  I shopped sales and used coupons to get the most out of my money at the store.

4.  I used a bunch of odds and ends of meat (some leftover Thanksgiving turkey from last year, one lone pork steak, some odds and ends of beef roasts I'd cut up for stew beef and some lamb necks) and some "not quite prime" garden produce (skeletal looking chard that had taken a lot of slug abuse before picking, the teeny tiny potatoes, some smaller peas) along with a few pieces of produce from the fridge to make a huge pot of stew for dinner tonight.  It was delicious and filling, even my husband was amazed how filling it was, so score there!  The leftovers will be lunches for the next three or four days.  To go with it I dug out my one lowly package of frozen bread sticks and made a garlic Parmesan bread stick recipe with them (didn't get a chance to make bread the last few days due to sick kiddo).  My son LOVED the topping and ate the tops off of most of the bread sticks, but the rest of us got one bread stick a piece and actually did enjoy our dinner (my daughter even ate hers, more's the miracle).

5.  I fixed the glider rocker in the den.  My son had somehow knocked something loose (honestly he's pretty good with the chair so I think repetitive motion knocked it loose) and the back was falling off when I found him rocking in it (luckily no one was hurt in the event).  I tipped the chair over and studied it carefully and found where a screw had fallen out of the chair and that the screw was really sub par to begin with, so I took my lowly tool bag, hammered the chair back together carefully and sank in a new, nice and meaty screw and made sure it made contact with wood securely where before the screw had kind of just pecked the wood instead of securing it.  I am hoping that will last a while, although in hind sight I should have used some wood glue first to help keep it secure.  Here's hoping.

6.  I finally got through more than one episode of "Tudor Monastery Farm" on You Tube.  Somehow I have had a harder time getting into this series than all of the other farm videos, but it is interesting to watch.  I do have to admit, I miss Peter's and Alex's chemistry.  Tom and Peter seem to fight more on camera even and it just doesn't come across as as much fun.

7.  Retro Ruth of "Mid-Century Menu" linked to this archive of books earlier in the week and I have to admit to getting a bit addicted at looking at random cookbooks and things when time permits.

8.  My husband while at his parent's house yesterday picked a bunch of raspberries for me off of my mother-in-law's bushes.  I'm thrilled as this easily tripled what I had picked wild from our yard in one fail swoop.  I'm hoping we'll be able to get more so I have enough for jam and muffins and things for over winter, but we shall see (and thanks for the raspberries, Stacey!).

9.  I've continued to pick rose hips from my yard and have resisted the urge to pick ones that I see nice and ripe in other people's yards.  I've already gotten several weird looks from neighbors harvesting mine *laugh*.  I think tomorrow I'm going to figure out how many I have and see if I finally have enough to do something with them (fingers crossed there).

10.  I continued to go through things and weed out things and am now, I think, finally at the point where I can organize the kitchen a bit better.  Yay!

11.  I added water to a shampoo bottle and to a soap bottle to get every last drop out of the bottle before giving it to my son to play with (shampoo bottle) or refill it (soap bottle).

12.  I made my husband his birthday gift from things I already had around the house and it was something he really wanted, so double bonus there :).  More on that later as well.

So, there you are folks.  Some of my frugal adventures for the week.  How did you do?
Posted by Erika, "The Make Do Homemaker" at 11:54 PM