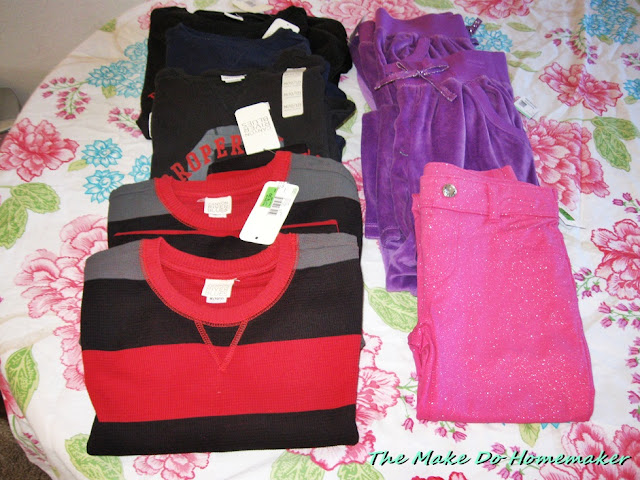 Okay, so it's Saturday, not Friday.  I was super busy and super tired yesterday and just didn't get to this.  Still tired and busy, but hey here I am ;).

This week was kind of a frugal fail around here.  We ate out too much due to dental emergencies and a sick son who only wanted to eat french fries.  One good thing did come out of my son not feeling good is that I forgot to give him Zyrtec one night and the next day he just kind of crashed.  My husband and I talked about it and we decided it's time to detox the son off of Zyrtec for a while and see how he does as he's been on Zyrtec for seven years and we just don't think it's doing much for him anymore.  So far we're not seeing hives or anything, although we are seeing a ressurgance of hay fever symptoms in him, so we're thinking of switching him to Claritin for a while and seeing how he does on a new medicine.  For the time being I'm just giving him Benadryl as needed to help cope with the eczema itching.

I filled up my gas tank last Friday.  Normally this would last me at least two weeks between grocery shopping and taking the kids to school, but with how life went this week my husband ended up emptying one of our reserve Jerry cans of gas into my car's tank on Thursday so that I had enough gas to get through the rest of the week.

Despite this week trying it's best to drive me nuts with stress and lack of sleep, we did manage to save some money around here.

1.  Like I mentioned above, my husband used a Jerry can of gas to fill my tank with five gallons.  This not only saves me from having to use my fuel rewards to get just enough gas to get by on the cheap, but it also saved me from having to get gas period till I can get my husband's paycheck in the bank today.

2.  We went to Sears last Sunday to get my son socks and underwear.  It was expensive for sure, but we do have a Sear's card so we figured we'd purchase the socks and underwear on that to save what cash we have in checking for bills until we can more evened out after the few short weeks we're going to have pay-wise.  Bright side is that the socks and underwear were a lot better quality than the ones at say, Target or something, so I was happy with that anyway.

While there I found out that green tag clearance was an additional 60% off.  I looked around and found shirts for my son for next winter and I found three pairs of pants for my daughter (two sizes too big, but I know the styles I got aren't going out of style anytime soon).  I was able to get all of them for 1.99 or less due to the additional clearance savings.  This is as cheap, for me, as going to the used store and getting clothes for them, so I was happy (seen up top).

3.   We took a trip out to a local discount center while we were running around last weekend as well (it's kind of a long drive, but my son wanted to go on a long drive, so we decided to go there).  Sometimes they have awesome deals on produce, which is what I was hoping for.  We didn't find any produce, but I was able to get a case of 24 bottles of ginger ale for 5.00 (20 oz bottles).  I was able to use pocket change to pay for it.  I love having ginger ale around in case of stomach bugs, to use as a mixer to make things like fruit punch go further, in case of guests coming over, etc, so this was a neat find.  It is an all natural ginger ale, so my daughter doesn't like it as it doesn't have the super carbonation of most ginger ales and it actually tastes like...you know...ginger, but I know she'll get used to it and I think it will be a LOT better for her stomach flairs than say 7-Up or something.  I really like all natural ginger ale as I love ginger, so at least I was happy with it *laugh*.

4.  I mended a few more holes in socks this week.  My darns are holding well in my husband's socks but I find myself darning around my darns now as the socks are getting thread bare and tearing in different spots.  I'm starting to kid my husband that I'm going to have to learn how to weave socks here soon *laugh*.

5.  I've found by using my coffee in my filter to make two cups of coffee instead of one, that this is significantly reducing the amount of coffee I'm using and the amount of filters I'm using.  I was able to completely skip buying coffee this month and the way the coffee is lasting I'm thinking I might be able to skip next month as well.  Not too much of a savings (9.00 a month for the coffee), but a savings none-the-less.

6.  I'm continuing to weed out what I don't need around here and was able to give some tall glasses away to my mother-in-law (my son couldn't grasp them properly and was constantly spilling things as a result) and gave away some other things to a friend of mine that I wasn't going to use who is going through tough times.  I really felt good giving the items to people who could use them right away without having to donate them as I know the items went to good homes :).

7.  I requested a few free samples this week.  I'm lucky enough to have a friend how is keeping on top of coupon sites where I don't have time and she let's me know when there are samples I might want/need to request (thanks for the tips, Stephanie!).  I even found Seventh Generation has started their own product testing type site, kind of like Smiley 360, so I joined up with them.  The only mission I have thus far is to get a coupon booklet, but coupons are always good.  I'm kind of glad as I've given that company a LOT of money over the years buying their products due to allergies, so I'm hoping to get some perks back this way :).

8.  I wrote to three companies this week expressing either happiness with their products or displeasure.  I like to do this a couple of times a year.  Not really as a means to get coupons, although sometimes that is a perk, but more as a way to keep companies informed as to how they are doing.  Remember, without feedback they really don't know when their products aren't meeting (or are exceeding) our expectations as consumers.  I kind of consider this part of my duty as a consumer to hopefully keep products I love on the shelves (or try to bring back the quality in products that I used to love, but am now disappointed in) for a long, long time.

9.  We made a diorama for my daughter's class this week (they're studying dinosaurs).  We had bought the clay as part of the school supplies, but we used a shoe box (I never throw those away) for the box and then we used paint, construction paper and other supplies we had around the house to make the diorama (including dead grass from the yard to help make a nest).  I was quite proud how it turned out actually (parents were expected to help their children make said diorama) as sculpture has NEVER been my strong suit  I tried through many years to get it, but clay just vexes me every single time.  So, with some help from my husband shaping the dinosaur parts individually (he's a better 3D thinker than I am) we were able to make a pretty decent looking dinosaur.  My daughter helped with the background, came up with the overall design for the diorama and she painted a bunch of eggs to go into a nest (she wanted a mama dinosaur in her diorama).  I then painted the dinosaur and the surroundings to make it look better (added some depth shading and such).  Overall, it was a busy weekend last weekend, but I call it a successful one on the diorama front.

10.  The electric company stopped by and put on a new meter on the house.  I'm hoping this allows us to track our electric consumption better as our bill still seems awfully high to me.  My husband stood while they put it in and learned quickly what the different sensors did and said he really liked it and it would make reading how the electric was performing a lot easier.  So, yay for that!

And there you are go folks.  Some of my frugal adventures for the week.  How did you do?
Posted by Erika, "The Make Do Homemaker" at 11:41 AM