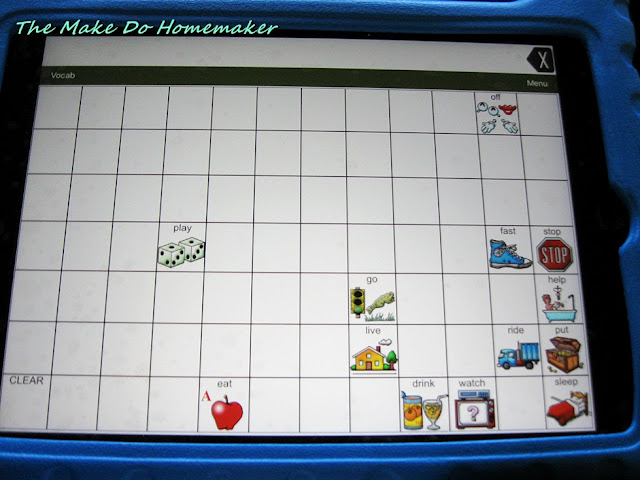 Well, I have to say as money saving weeks went, this one went really well!

So, let's break some of it down, shall we?

1.  We finally got my son his communication app (seen above)!  I talked it over with my husband and we both decided that we needed to get LAMP for our son and ASAP at that.  This was sparked by an incident at school where my son's teachers told me he had a pretty bad day.  He'd been really grumpy and kept trying to take his shoes off, which they thought it was his eczema bugging him.  They didn't want to take off his shoes because if they do that he really melts down when they go to put his shoes back on, so they just let him go.  Well, once we got out to the car and were going to get his sister, he presented his shoe to me like he wanted me to take it off and I figured I could do that for him if he wanted to itch for a bit as he had the drive to my daughter's school.  So, I took off his shoes and found that he had like 17 (and no, I'm not exaggerating) rocks in his shoes.  At that point I just decided that was it.  He needed to communicate NOW or maybe sooner.  We were already kind of fed up that we'd had to wait for so long to get a communication device for my son (now mind you, I don't blame his teachers NOW for this...I blame his first preschool teacher who didn't like to do paperwork so she never pushed to get him the evaluations no matter how we pushed for them) and this was the last straw.

I was going to buy the app and just deal with the financial consequences, but I stopped myself literally one letter from typing in our password on the app store and I thought for a second.  April is Autism Awareness Month, so a lot of communication apps go on sale.  That was only about three days away at the time, so I talked to my husband and we both decided three days wasn't going to make a difference one way or the other in the grand scheme of things.

And I am so glad I waited!  I checked last night to see if some of the apps would go on sale sooner and sure enough LAMP for Life was on sale for half off!  So, instead of spending 300.00, we were able to get the app for 150.00.  We're already starting my son on using it today and honestly it feels so GOOD to have this for him now.  This is why I hate waiting for grant and other government subsidized help.  Sometimes (for us) it's just been easier to pay for things ourselves and just get it done. 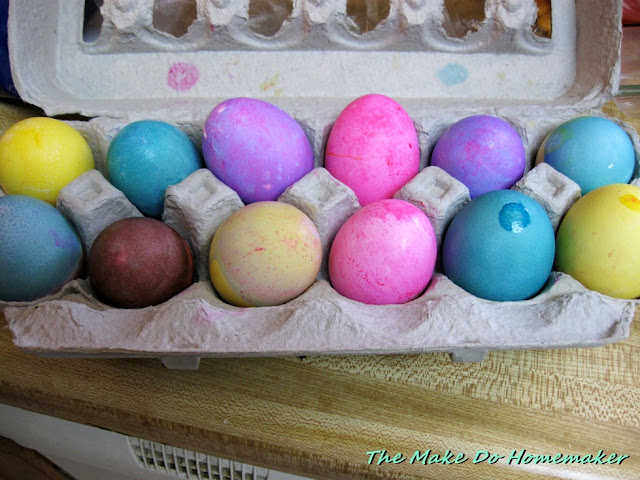 2.  We colored Easter eggs this year for the first time ever (I know, I'm pathetic) and instead of buying an Easter egg dying kit I looked on Pinterest and McCormick had instructions on how to make different colors of Easter egg dye from food coloring.  Since I have food coloring, I thought I'd give that a shot.  I had neon colors in gel form, so I dissolved them in the 1 tsp of vinegar first to see if I could incorporate the colors better that way and then when I added the boiling water the colors separated...kind of curdled (ah interactions with acid are fun aren't they).  We thought it might ruin the coloring on the eggs but instead it made the most awesome tie dye and speckled coloring on the eggs!  We decided we're definitely going to be doing that again next year :). 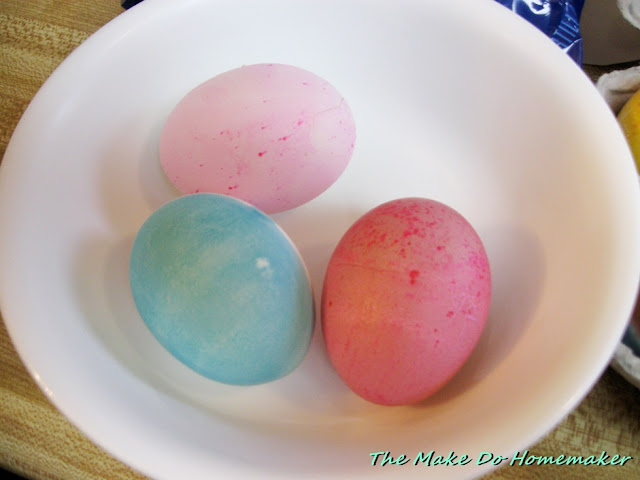 I thought they turned out pretty cool looking, although the photos don't really do them justice :).

3.  I continued to use up stuff we had around here this week on the food front and we made a point to consume leftovers so we didn't waste food as much as possible. 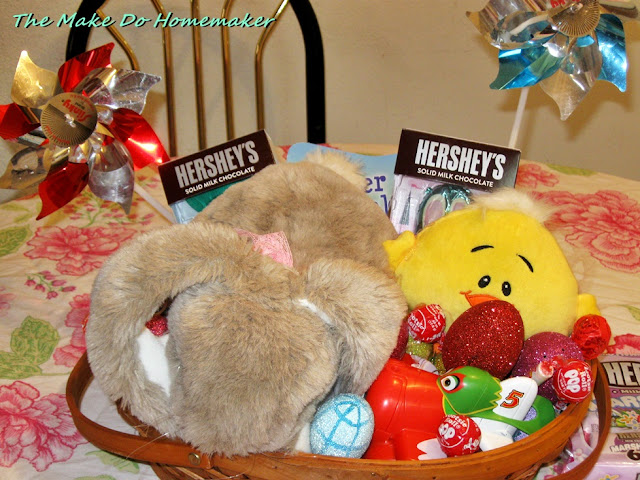 4.  The Easter basket this year was a really big success!  I normally put about 40.00 aside per holiday because of my son's peanut allergy and having to buy special chocolate or chocolate candy melts and once shipping was included it would always be about 40.00 or so.

This year, though, I went to the store and found safe chocolate!  I found Hershey bunnies that were safe for the son, so I got one for each kiddo.  And I got some Tootsie pops and some Smarties to go on the basket as well.

I stopped off at the thrift store and found a stuffed bunny (with floppy ears), a Veggie Tales book (on the miracle of Easter), a stuffed chick that was kind of like a ball (son likes to spin things so I knew he'd like it) and a Planes toy that I figured my son would like.  And I found "fancy" eggs for my daughter that someone had created using eggs, glitter and probably Modge Podge but were really neat looking and some decorative solid eggs that I knew my daughter could actually play with and I wouldn't have to worry about her breaking in a few days.  I even found Easter basket "grass" brand new in bags for .25 per bag so I got one pink and one green to put in the bottom of the basket.  I finished the basket with the pinwheels I found earlier.

I did have to put a new ribbon on the bunny as I realized after washing it that there had been a ribbon glued on that the previous owner had pulled off, so I took some lace and made one, which took no time.

Overall for about a 13.00 investment my kids got a really nice Easter, which is about 27.00 below what I had put aside just for chocolate.  Yay for savings and a lot of gratitude to Hershey for making safe chocolate for my son that I can actually FIND in the store.

5.  I have been having fun watching old Galloping Gourmet episodes on You Tube as well as re-watching "Victorian Farm" for fun.  I love being able to just put a show on my computer so I can listen to it in the background while I'm cooking or baking...somehow it keeps me motivated when other people are working even if it is in a show in the background.  Go figure *laugh*.

7.  My kids ran out of toothpaste and instead of going and buying toothpaste I grabbed a sample sized one that we got free from the kid's dentist when we went in for their last visit.  I love that he uses the same toothpaste that we do, so I can do this with the kids and my son doesn't protest.

8.  I did great grocery shopping this week.

9.  I've been cleaning this week and have quickly figured out some things I can live without or donate, which honestly makes me feel good as it's getting rid of some "catch all" piles throughout the house and making things look so much cleaner.  I'm hoping to get rid of the things on my list in my hallway closet next.

And there you are folks.  Some ways I saved money this week.  How did you do?
Posted by Erika, "The Make Do Homemaker" at 6:59 PM