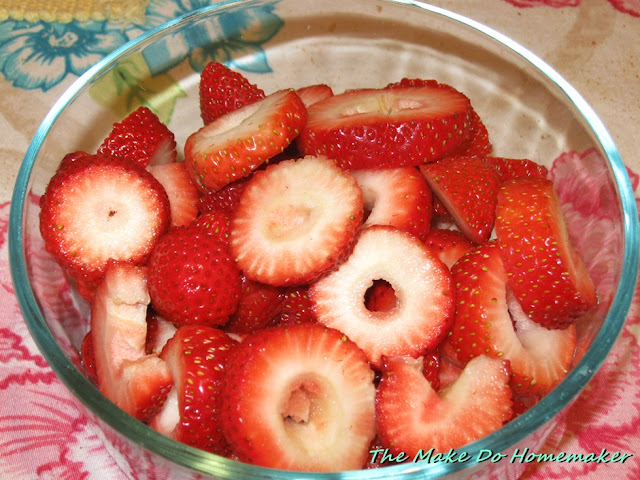 Well, this has been kind of a mixed bag week when it comes to saving money.

I went over budget on groceries because I had to, plain and simple.  It was funny though.  I was kind of freaking out about how much money I'd spent and my husband gives me the "You've got to be kidding" type of look and says, "Wait, isn't the amount you spent around what your normal weekly grocery budget would be?  Really, I thought we did good for 150.00."  After thinking about it for a moment I was like, "Yeah!  I mean I even got meat for that amount!"  It's nice to get a good change in perspective sometimes.

Unfortunately, the groceries are where the having to spend money thing started.  Went to put on my son's shoes for school yesterday and on a whim, since he's got a few pairs of pants this week that ended up being high waters by the end of the week, I checked his shoes to see where his toes were.  Now mind you, I had bought him shoes that were big on him the last time we got shoes, hoping he'd be in them for at least six months.  No cigar there.  His toes are at the end of them.  So, we're off to the shoe store today to get him sneakers and gym shoes.  I'm praying my daughter is still fitting in hers *fingers crossed*.

Then my husband's insoles went on his shoes. All at the same time (no really, he showed me), so that was 35.00 we weren't planning on spending going out the door all at once.  We had to get a car scanner thingie for reading warning codes so we can try and figure out what is wrong with my car (this way we can read codes on the fly).  Overall, a kind of depressing weekend on the spending money front.

But, I did manage to save money here and there, so let's go over that shall we?

1.  I did manage to get strawberries (yay!!!).  I was impressed with how patient my husband was as I stood there looking at strawberries containers for 15 minutes or more trying to find ones that didn't contain rotten moldy strawberries.  I finally settled on ones that had some bruises and a bad spot here and there, but overall seemed to be in decent shape.

Since I was going to the store for strawberries, I grabbed some .50 off coupons I had from Drischoll's.  I never remember which store sells which brand when it comes to strawberries and such, but I had them, so I grabbed them.  If you sign up for their newsletter Drischoll's will send you a .50/1 coupon (or it might be .55/1...I can't remember off the top of my head) for your birthday.  It's a Smartsource style of printable and somehow this year I just could not get that darned thing to print.  So, I wrote to them and asked them if there was anything they could do, so they sent me 2 .50/1 coupons in the mail instead (which was nice of them, I thought :).

So, I got two things of strawberries for 2.00 a piece after coupons were applied.  None too shabby really.  My daughter has already eaten one pound of them for dessert last night (as seen above post washing and slicing).

2.   While I did spend money on groceries this week, at least I got a good amount for my dollars.  I had to go to three different locations to do it, but I did it *laugh*.

3.  I took a Fred Meyer survey to get additional fuel points and then went and used them on top of rewards points to get .20 off per gallon of gas.  We also filled up in Eagle River, which somehow is always cheaper than filling up in the Valley, so I was happy to fill up my tank for 28.00.

4.  I mended a few of MY socks this week.  I keep putting off doing my own clothes when it comes to mending and finally realized that I really just needed to stop doing that and take care of myself too.  So, I darned two pairs of socks that desperately needed it.

5.  I ended up making a giant pot of beef and vegetable stew based on a recipe by the Galloping Gourmet (I'll definitely post up that recipe here with the pantry "tweaks" I made as it was so good my HUSBAND even liked it!!!).  This ended up throwing my meal plan through a bit of a loop as it made a lot more than I was expecting, so we ended up eating leftovers for lunch and dinner a couple of times throughout the week, but it worked out well overall and I'm really glad I made it!

6.  I mended a hole in a sweater of mine (one of my least favorite chores) with a tiny crochet hook my step-mom sent me.   I did a good enough job that I can't even tell where the hole was until I flip the sweater inside out (I was proud of myself on that one).

7.  I got behind on folding laundry this week due to lack of sleep or a cranky son (or both) and having to run unexpected errands and such, but overall, I still kept on top of WASHING clothes, vacuuming and dishes (I'm a load behind today after being out all day yesterday, but I'll be caught up by dinner, so it works).  Feels good to be able to clean the house in an hour or so and have it done if I'm fast and not busy (which is unfortunately where I always seem to get behind).

8.  I mended a sole on one of my sneakers with Shoe Goo.  I love that stuff.

9.  I started going through my cookbooks, per usual, and started bookmarking meals and desserts to try in the coming weeks.  It helps me to stay on task and also helps to keep cooking interesting, which is important to me :).

10.  I was worried I was going to need to buy chicken, but while trying to organize my freezers a bit better (and hopefully save my feet from harm) I found a bunch of chicken that had gotten buried underneath some bags of frozen vegetables.  Which means I'm a bit lower on frozen veggies than I thought, BUT also means that I'm not as low on chicken as I was worried about.  So that was good to find.

So, there are some of the ways I saved money this week.  How did you do?
Posted by Erika, "The Make Do Homemaker" at 10:47 AM