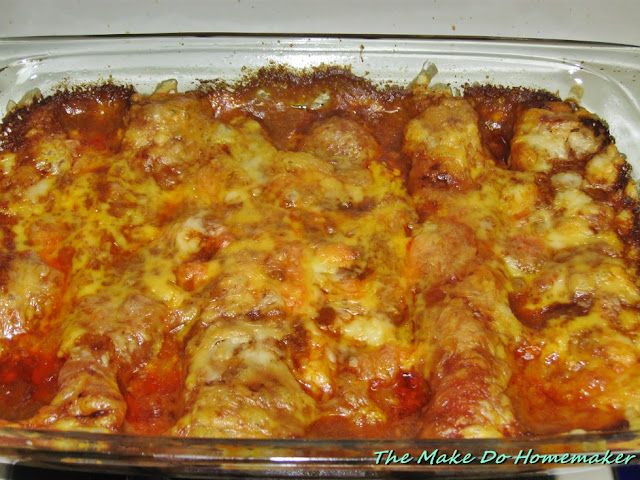 First, I just want to say that I'm in a much better place today.  Which is definitely a good thing :).

As soon as my husband got home last night I used the, "We need to talk" line on him (which I HATE, but didn't know how else to say it).  I had thought for hours on what I needed to do to help my peace of mind and my sanity and finally decided what to do.  I told him that I just plain can't do the financial book end of things for a while.  I need a break.  I have gotten to an OCD point with trying so hard to save money that I'm obsessing about dollars and cents to an extreme.  I started realizing this was a problem when I sat down and figured out on paper how much money I'd save per cup of coffee if I switched from half and half to milk (8.2 cents for anyone interested).  My quality of sleep, what sleep I could get with my son in the house, sucked.  I was dreaming of money problems on top of living them in my daily life.  I was cracking after 15 years of being at constant war with our finances.  So, I told my husband that he had to take over for a while.

And he was okay with it, thank goodness.  It was such a relief that he's willing to do just the looking at the bank and figuring out how to make bills end of it.  I am just going to ask for a certain amount per week in an allowance and save money that way and then pay the bills as he tells me that we have the money to do it.  I just need relief from that added stress that much.

I slept better than I have in YEARS last night as a result and feel like a huge weight has been lifted from my shoulders.  I know we're still broke, we still need to stretch every penny and have the same problems, but I don't feel like I'm going to be doing it alone now.  Honestly, this might work out well (I'm nervous, but hopeful) as my husband plays things WAY more tight when it comes to money than I do naturally as men, it seems, are more risk takers than women are, so who knows, having another set of eyes and a different mind set might get our bills paid down quicker.  Only time will tell.  And at least this way I won't be obsessing over every penny my husband is spending.  I've always been able to live within a budget if someone sets it for me, starting back from when I was a kid and my mom would let me do the grocery shopping because she knew she could give me a number and I'd make that budget work come anything and everything.  And hopefully, once we get the first set of bills out of the way at the beginning of the year right now I'll be able to start saving money with my little allowance and help to pay bills off that way, too.

So, anyway, the Bare Essentials living began this week as I was able to get bread flour on my regular grocery budget last week (and recharged my phone all according to plan...nice when things work out like that) and figured I might as well start as there is no time like the present.

So, here's a break down of some of the things I used from the pantry and freezer or as I like to call it, "Adventures in Frugality" (this sounds MUCH cooler if you imagine it said with an echo bar going in your head...just saying ;).

1.  First was enchilada night.  I only have so much cheddar cheese in the house right now and picking up more, unless cheese goes on sale cheap here in the next bit, could take up to 1/4 of my weekly grocery allotment, so I wanted to make the cheese stretch as much as I could.  So, I dug around the freezer, knowing that I had some blocks of cheese in there somewhere, and found cheese wayyyyyy in the back that had been moved from our previous house with us it turns out (I kept saving it in case we needed it and didn't realize exactly how much time had passed).  And yeah...it was old... 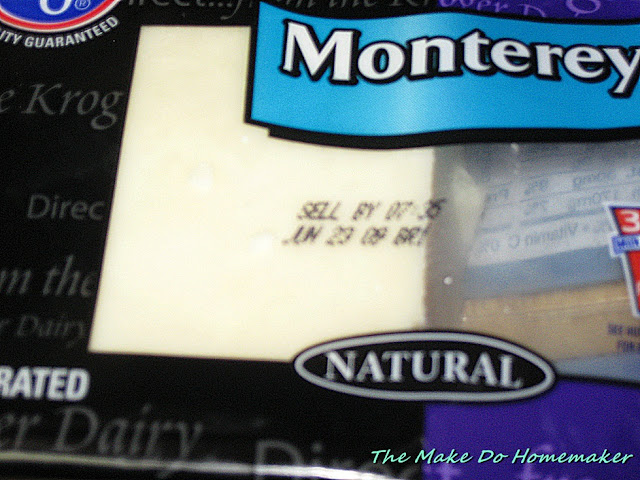 It survived in it's original package alright though.  No freezer burn could be seen through the package, so I defrosted it to see what would happen.

I was a BIT worried as it shrank in the package a bit when it defrosted, but when I opened it no freezer funk smell met my nose and there wasn't any weird spots or anything on the cheese.  So, I cut off 1/2 the block and crumbled it as a base cheese layer for the enchiladas.

Here's a shot of the enchiladas before they went in the oven... 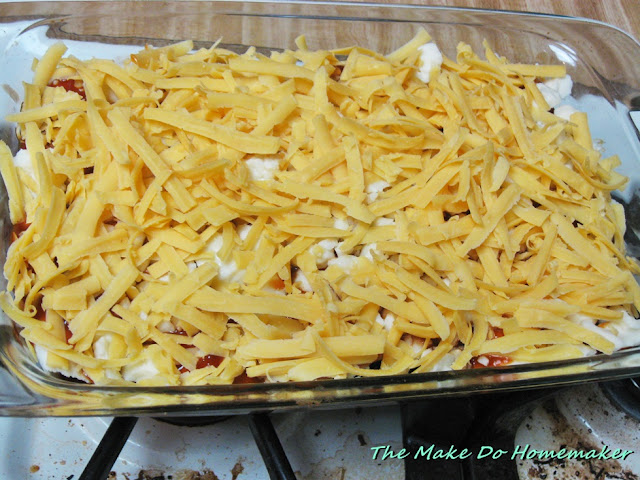 How did it taste?  Well, I can safely say that the cheese could stand in well for feta in dishes as it became REALLY sharp over time (which I'm wondering if a lot of that was due to the loss of moisture from being in the freezer for so long, but I'm not sure).  The enchiladas weren't bad and the cheese melted alright, but the cheese was potent.  I am thinking of using what is left of the cheese in pasta salad or something to use it up.  It's good, but sharp.

Oh and by the way, I've tried about fifteen different ways to store cheese where it wouldn't mold on me very quickly and this is the best method I've found.   I wrap the plastic from the cheese over the exposed end of cheese, take some plastic wrap and place over the exposed end too and then secure it with a large hair elastic.  I haven't had my cheese mold on me even when I have it stored for weeks at a time in the fridge this way and it does keep the end moist too. 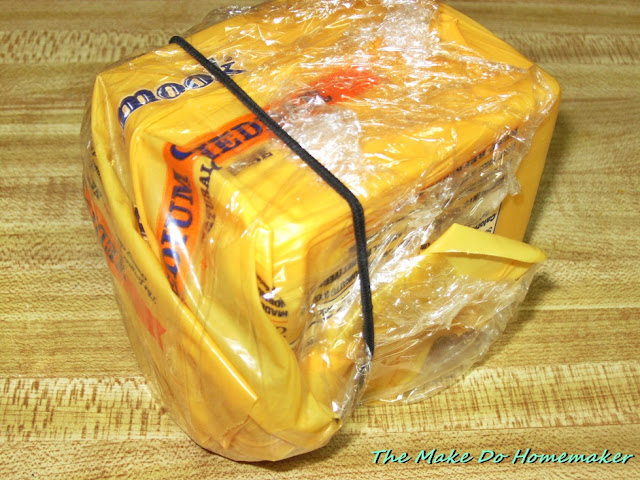 2.  While digging through the freezer I looked through the breads that my sister-in-law had been nice enough to give us a while back and discovered a bag of hamburger buns.  I took them out, some whole wheat English muffins and some rye bread for different things, figuring that I'd give my son the hot dog buns for a meal.

Unfortunately I looked at the back of the bag and discovered the dreaded peanut cross contamination, but not before my son saw the hamburger buns.  He LOVES hotdog and hamburger buns, so I quickly had to think of a way to use them up that he would not want to touch.  The buns were freezer burned quite a bit too, so that added to the equation.  But, I didn't want to throw the buns away, so I sat down and thought for a moment. 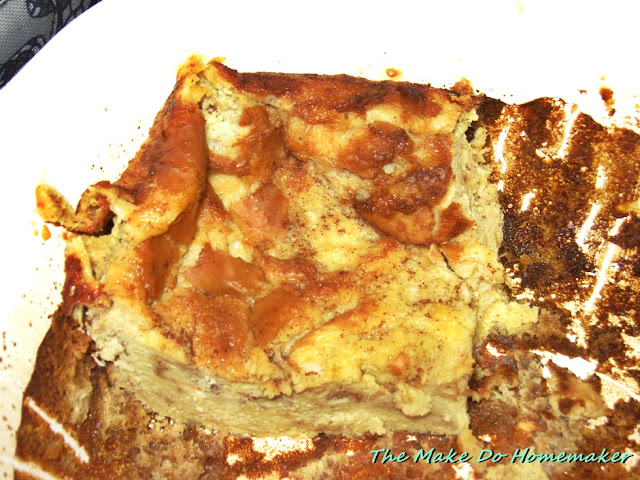 My husband has been eating it for dessert all week happy as a clam while I ate the chocolate rice pudding just as happily *laugh*. 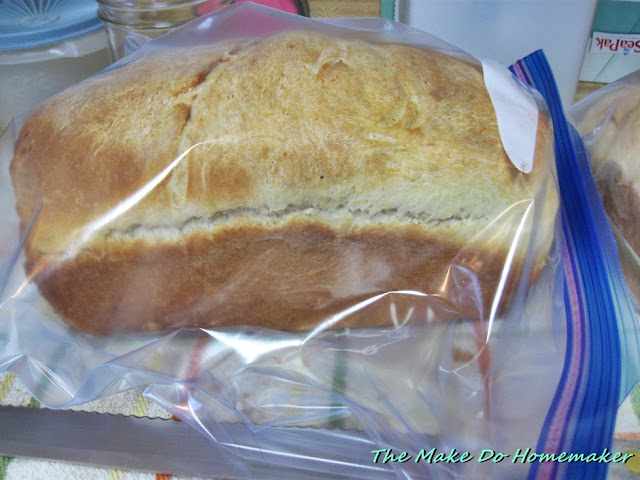 So, I decided to make cinnamon swirl bread instead.  This way I could use margarine in the bread instead of butter but still get a butter flavor and still get the cinnamon flavor I'm craving.  I accidentally used bread flour instead of AP flour in the recipe (luckily it still came out okay).

The recipe calls for milk, and I didn't want to use our fresh milk if I could help it to make the bread as I'm trying to stretch the milk as far as it will go during the week.  So, I went into the pantry and grabbed one of the boxes of milk I had in there instead.... 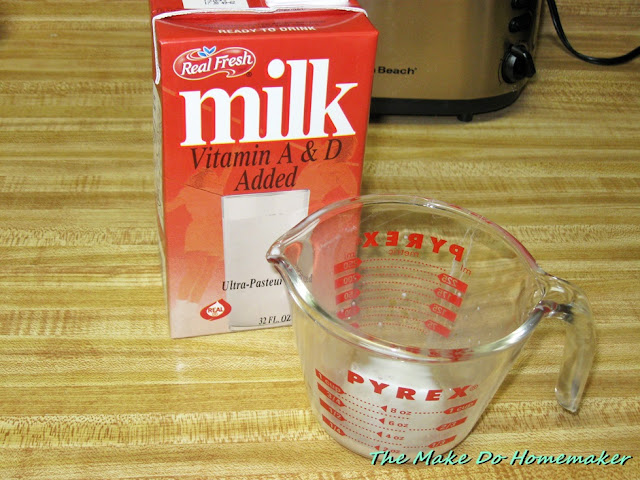 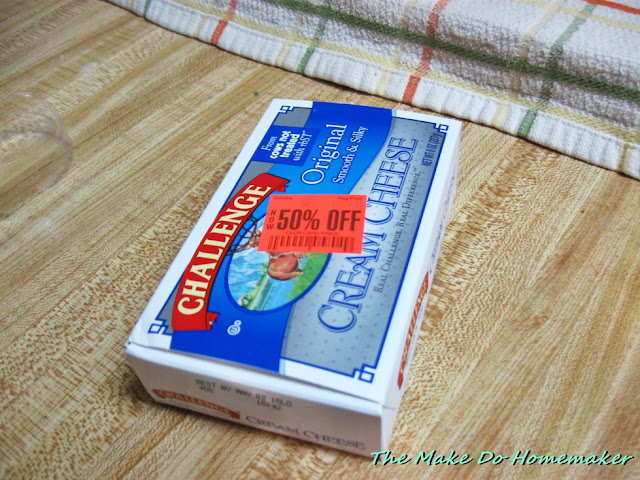 So there you are folks.  Some of the things I've been going through on the culinary front this week.  Anything interesting happen on your end this week?
Posted by Erika, "The Make Do Homemaker" at 3:52 PM