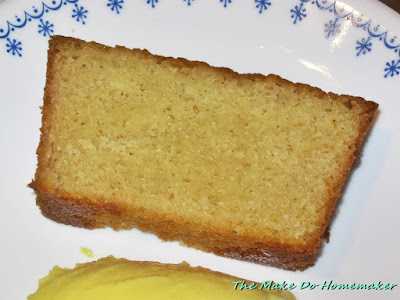 This is a recipe that actually stems from my very own cake wreck.

I wanted pound cake for my birthday so I found an old recipe in one of my cookbooks that looked promising and followed the recipe to the letter.  About an hour later I tested the cake for doneness outlined in the recipe and then went to put the cake out on the cooling rack. Only to meet with disaster.  The cake fell apart as it came out of the pan and batter oozed out everywhere.  Turns out the cake was about 60% uncooked.  I managed to scoop up the pieces with a bench scraper and put it all back into the pan and even though I knew the cake would look awful, I threw it back into the oven, knowing with the lack of leavening in the recipe that I wouldn't have to worry about it falling or anything.  An hour and a half LATER at fifty degrees over what they wanted for a cooking time and the cake was finally done and dense as a brick.  I decided to punt in the way my step mom suggested and saved the failed cake (which did taste decent) to use as trifle fodder later.

And then I returned to the kitchen, pulled out five recipes for pound cake and what I had left for ingredients and I used food science to get the job done.

So, you'll notice that this recipe contains leavening agents where traditional pound cake recipes don't.  This is because this recipe only contains two eggs where a traditional pound cake recipe gets any lift it has from lots of eggs (five or more I found).  I then boosted the leavening power by adding soured milk (you could also use buttermilk).   Don't worry the cake is still plenty dense, plenty sweet and plenty good.  It just requires a ton less eggs.  It also requires less butter than the recipes I found (and less than the first one I made), but still comes out plenty rich. 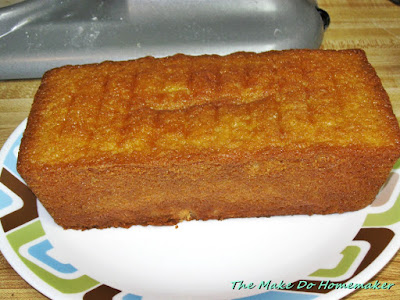 3.  In a medium sized mixing bowl or on some waxed paper sift together the flour, baking powder and baking soda.  Set aside.

4.  In the bowl of your stand mixer, cream together the butter, sugar, salt and vanilla extract until light and fluffy.  Add eggs one at a time, mixing well after each addition until smooth.

5.  Stir the flour mixture, a little at a time, into the butter mixture, alternately adding buttermilk or soured milk until everything is incorporated and the batter is smooth.

6.  Turn the batter into prepared loaf pan.  Bake 50 to 60 minutes or until a toothpick inserted into the center of the cake comes out clean.

7.  Let sit in pan on an off stove burner (or on a cooling rack) for 10 minutes.  Take a thin metal spatula or a thin bladed butter knife and run around the perimeter of the cake.  Turn out onto a cooling rack.  Let cool completely.

8.  Once cool, take a plate and place over the bottom of the cake, pick up the cooling rack (cake and all) and invert the cake carefully onto the plate.  This will, yes, give you a cooling rack lines on the top of your cake, but it will also give you a cake that is in one single piece instead of potentially falling apart on you flipping it over before you cool it.