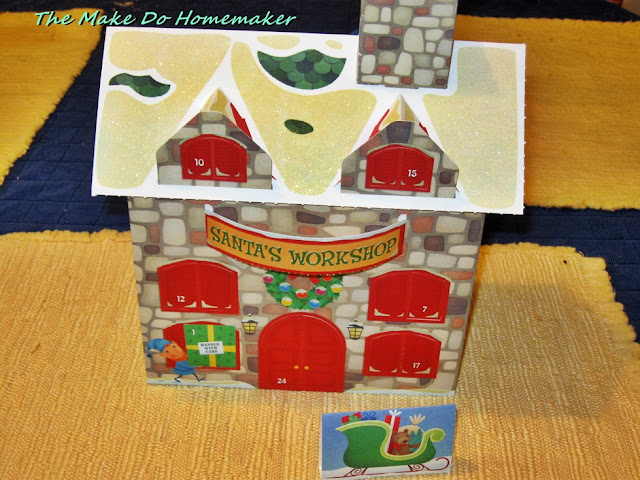 Well, I can happily say that things are going a bit better around here for now.  We were able to get paid for some work my husband did which allows me to breathe without panicking for a little bit.  Being able to be happy and not worried this time of year really does make the holiday season pass a little bit more happily.

Double bright side is that because we actually got paid, that I was able to go to the store and get a few things that I was hoping to be able to afford, but feared I wouldn't be able to.  Which will save me money later, which is definitely a good thing.

So, some ways I saved money this week are...

1.  We put together one of our advent calendars today (I know, we're running late this year).  You can see it above.  We went into one of our local thrift stores last year around the holidays and one of the owners, who knows we're regulars, gave us a couple of unopened advent calendars for the kids for free.  I put one together last year and my daughter had fun playing with it and also opening all of the doors as advent progressed.  This year my daughter is even reading the messages inside of the boxes to us, which makes me proud.

2.  I went to the store today and hit some sales hard.  Carrs has navel oranges for .99 per pound this week.  I got ten pounds.  It wasn't the lowest price point of the season, that was at Fred Meyer's a couple of weeks ago, but my daughter had already blown through the 6 pounds of oranges I had bought then, so I figured I'd better stock up this time around.  She even wants me to start including them in with her lunch for school, so I'm thinking that these MIGHT last about three weeks...might.

I was also able to get the groceries we needed and still came in 50.00 under my normal weekly grocery budget.  I used part of that money to fill up the gas tank in my car instead of doing the usual 5 to 7 gallons of gas to get me through another week of school.

3.  I made some Christmas decorations for the outside of the house with materials I already had around the house.

4.  I was nearly out of dish soap, but instead of throwing it out when I couldn't squeeze anymore out of it, I added a bit of water to it and shook the bottle well.  This allowed me to do three more loads of dishes with what little soap was left in the bottle.  I have soap to refill the bottles with as I empty them, but I still preferred to empty the bottle completely before refilling it.

5.  I found Andes mints at the store on sale for 1.00 per box.  I bought four boxes.  These will be used as stocking stuffers for the kiddos as well as for some baking fun around here.

6.  I continued to work on Christmas gifts this week, although I'm still hoping to make more progress on those over the weekend.  I was worried about putting up the Christmas tree for fear I'd lose the ability to use my sewing machine, so I thought about it and redid the layout of my den so that I could put up the tree today and also be able to use my sewing machine.  My husband actually prefers the new layout to the old, so double bonus on that (more on that later).

7.  I called in some of my utility bills today, thus saving myself a stamp.

8.  This week we spent a lot of the week at home due to my son still not feeling great from his stomach flu after effects, so I didn't spend money on "satellite items" or anything like that.

9.  I had a problem where I have to shampoo my stairs in my house because of some stomach flu things that happened (won't go into icky details), but my carpet shampooer hose thing for upholstery and stairs has never worked right and finally broke completely a bit ago.  Instead of sitting there for hours messing around with the hose and worrying about trying to get it all working to the point I could get the stairs cleaned, I went and just bought some carpet cleaning foam at the store as part of my normal grocery budget.  The foam will disinfect the carpet and get it cleaner than trying to use the carpet cleaning attachment and it will save me a lot of time and effort.

And there you are folks.  Some ways I saved money this week.  How did you do?
Posted by Erika, "The Make Do Homemaker" at 6:29 PM