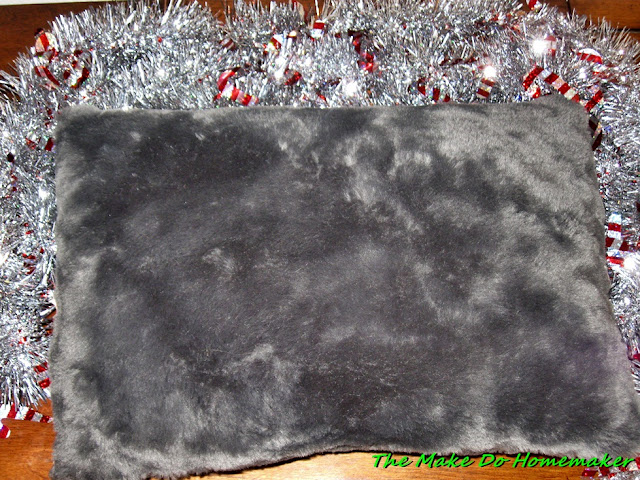 My son, being the sensory seeking little thing he is, I really wanted to make him something with fake fur because he LOVES it (mainly loves plucking it and watching it float, really).  Originally I REALLY wanted to make one of those awesomely cuddly looking throws with the fur on one side and something cool, like flannel or cable knit, on the other, but I realized I didn't have near enough fake fur right away and I was wondering before THAT if I'd be able to dig up enough material for the other side of a throw anyway.  So, I let the little gears in my head turn and finally came up with the idea of making him a fur pillow.

I know there are some draw backs to this as it's not even a pillow sham (I didn't think fake fur would make a good pillow sham, honestly), but an actual throw pillow.  One:  I'm sure this fur isn't able to go through the dryer and washing it might mat up the fur.  Two:  If my son starts plucking it and creating bald spots, you can't just flip it over like you could a throw and hide it.

But, I also figured that the fake fur was given to me by my husband's grandfather in a sack of cloth that used to be his wife's and I think Molly would be happy with the idea of a child getting enjoyment out of something like this while it lasts.

We'll see how it holds up over time.

I just cut a basic shape of a throw pillow out of the fur, using as much of the fur as I could (thus why it's rectangular vs. square and has a few places where it's a BIT off of straight), put right sides together and sewed it up with a 1/2 inch inseam.  I left about a four inch hole to stuff it (I have small hands, which helps for things like this) and then hand stitched the last bit shut with a whip stitch when the pillow was stuffed.

Total Cost to Make Gift:  Free.  The batting came from the bags of batting I found in storage over the summer and the fake fur was given to me.  The thread came from the stash of thread my step-mom gave me.  I did switch out the needle on my sewing machine to a heavy duty denim needle for this, but that was also given to me by my step-mom (have I mentioned my love of that woman lately?  :).

Total Time To Make Gift:  About an hour.  The batting in the bag was the nice heavy duty fill, but it did NOT want to un-clump from it's huge lump in the bag, so I spent a good portion of time getting coated in fiber fill as I had to tear one small chunk at a time off of it to stuff the pillow.  Got done right about the time I was starting to get frustrated *laugh*.
Posted by Erika, "The Make Do Homemaker" at 9:36 AM

Email ThisBlogThis!Share to TwitterShare to FacebookShare to Pinterest
Labels: A Gift a Day, Christmas, Holidays, Sewing