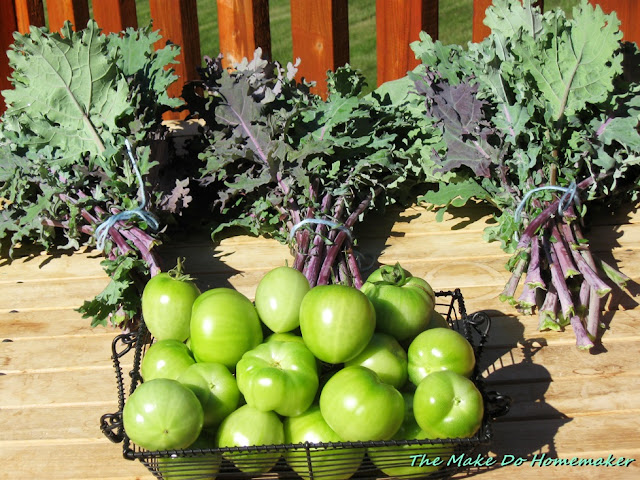 Oddly enough, it didn't seem like I got much done this week because I've been so preoccupied with different things.  We found out the hard way that my son was allergic to dandelions by his occupational therapist putting some dandelion salve on his eczema, which I approved when I found out the three ingredients in the salve not thinking about it.  Yeah, a week later he's still hiving but the first three days were the scariest where he was on the max amount of medicines he was approved for to keep him from needing an oral steroid to stop the allergic reaction.

Then my husband caught a bad cold and I've been dealing with that.  My daughter had a field trip this week...it's been one thing after another it seems on top of the regular money worries.

I did manage to accomplish a lot this week even with all of that going on though.

1.  I harvested green tomatoes to make relish (as I have a LOT of green tomatoes) and the rest of the kale from the garden this week (seen above).  The kale I'm going to give to friends and family as I have more than enough greens to last us through the winter now and I figure sharing the bounty is never a bad thing.

I was able to make the green tomato relish with green peppers I had in the freezer from some peppers I vacuum sealed from our garden from previous years and onions, garlic and green tomatoes (obviously) from the garden this year.  So, the relish was literally made from materials from my garden (sure the peppers were from a previous year, but I'm still counting them ;).  I thought that was really cool for some reason.

2.  I canned a lot this last week.  I canned rhubarb concentrate, salsa, wildflower jelly and other things.  I managed, for the first time, to do my math right, so that once I am done canning some cranberry sauce I will have used up all of my empty jars exactly.  I feel proud that I managed that as it seems most years I end up having to pick up at least one flat of jars to finish up my canning for the year.

3.  I baked bread yesterday and am planning on baking cookies and pizza rolls today.  This will be a great help for lunches for my daughter and husband.

4.  I finished the major part of my son's birthday gift.  I made him a quilt yesterday.  Today I'm going to sew a pillow sham that I want to embroider to finish the bedding "set" I am making for him.  I ended up spending 7.00 on materials to finish the quilt as I was a couple packages of quilt binding short.  Still can't figure out how I managed to do THAT boo boo, but it happened. 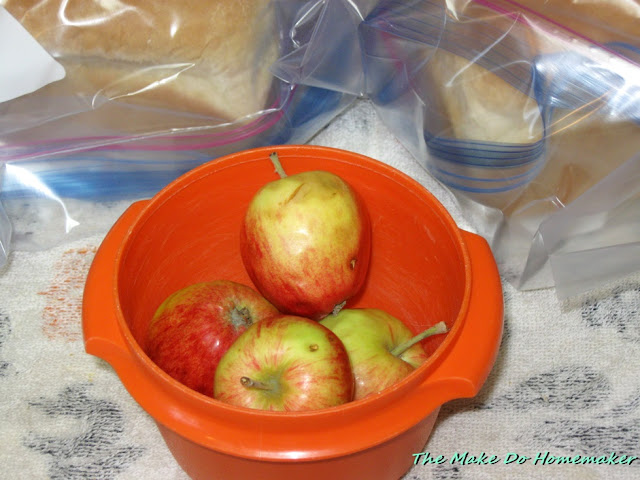 5.   My son's therapist had apples that had fallen from her tree out for anyone to grab if they wanted some.  I grabbed a few and have been eating them as snacks the last few days.  They are small, but tasty.

6.  I redecorated my daughter's room for fall for free by re-housing things I already had (more on that in another post).  I'm now focusing my attentions on my son's room and am hoping to have it redecorated by his birthday.

7.  I made a big pot of chicken noodle soup earlier in the week.  I made double the amount that I had called for on the menu, knowing that my husband had a cold and figuring I could eat the leftover soup all week long for lunches.  It has been nice to have soup again and I am thinking about doing this more often (my husband doesn't like soup).

8.  I have been trying to clean more efficiently, thus saving money on things like electricity.  I'm trying to schedule out things like a mending day, a washing day, a shopping day, etc.  If nothing else it is helping me to feel more organized, which is a nice feeling.

9.  Anytime we have sunlight I've been turning off lights and opening the curtains.  We finally had to start turning on the heat the last few days on and off, which it is all the more important to be careful with the electric and such now that winter is definitely coming.

10.  I mended a bra this week that had a seam that split and I had underwire poking out.  I took a small piece of material and a bit of batting and fixed it so it could still be worn comfortably.  I've got more mending to do on my list for today, so I'm hoping to be able to get it all done.

11.  I made 1/2 tank of gas last in my car for two weeks worth of driving the kids back and forth to school and keeping running around to a minimum.

And there you are folks.  Some ways I saved money this week.  How did you do?
Posted by Erika, "The Make Do Homemaker" at 10:09 AM