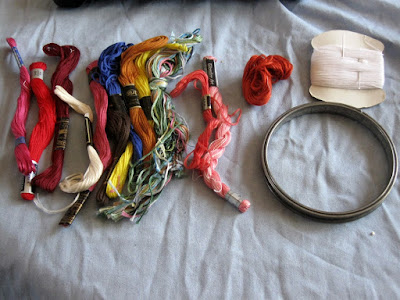 I admittedly haven't been out of the house much at all this week due to the kids and I coming down with terrible head colds.  After battling my sinuses for months, a lot of which was probably due to stress, my body just kind of gave up with this cold, so I ended up at the doctors and am on antibiotics for the first time in years.  Have to say that I haven't missed being on antibiotics much at all, but hopefully I'll start to feel better soon.

Saturday, however, before we all started feeling gross, we hit the used stores and I found a few minor things I was looking for.

I was able to get all of the things seen up top for 1.25 at one of the local used stores.  I was thrilled to find the small darning hoop, let alone all of the thread that it came with for so cheap.  I even got a good amount of darning thread with a needle in the bag (the white thread on the cardboard spool there).  So, that was a very cool find.

My husband is going to have to do some minor repair work on the darning hoop where it got bent out of true around where the spring is, but he's pretty confident he can do it without doing damage to the hoop, so that was good to hear.  I'm not really planning on using it for darning much, but it will make small embroidery areas that much easier to work on since it's nice and small.

I was also able to find a couple white bath towels in brand new type of condition at another used store for 2.00 a piece.  I have two bath towels that were just shot, so I got the white towels to replace them.  Why white?  Because I'm tired of towels I buy at Target or some other places bleeding after washing them tons.  Every once in a while I'll miss a colored towel in the middle of my whites and then I have a mess, so I'm tired of it and am going to try and just get more white towels.

So, there's my finds for this week.  I hope your thrifting adventures went well this week as well!
Posted by Erika, "The Make Do Homemaker" at 4:18 PM