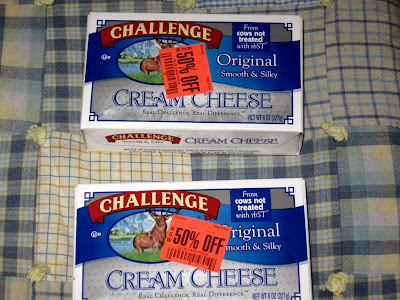 First, monthly financial goals aren't up yet.  Mainly because I'm still working them out (last month wasn't a great month finances wise).  So, as soon as I figure it out, I'll post those.

And so, second, we find ourselves at the end of another week and it's time for the Frugal Friday recap.

So, here we go!  Some good things did happen this week worth reporting on the money saving front.

1.  I was able to score some free cream cheese after some Catalina coupons I had.  I got some coupons for 1.50/1 Challenge Cream Cheese, and thought, "WOW!  What awesome coupons!"  Only to find that the normal price on those things was actually rather high (in the case of Carrs they are 2.99 a piece normally).  I was in town earlier in the week to get some banking done, so I zoomed by the dairy case and found, to my surprise, some Challenge Cream Cheese for 50% off.  So, after coupons I was able to score two of them free (seen above)

2.  My husband's car, sadly, blew it's starter, but since we have classic car insurance on said car the tow home didn't cost him anything, which was nice (he's allowed under his policy so many tows within 50 miles of our home per year). 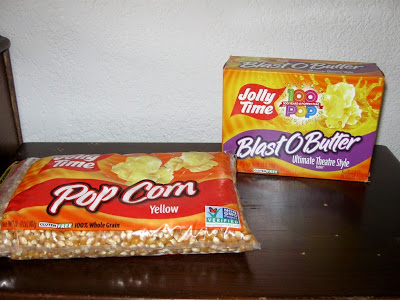 4.  I used some coupons to get some free popcorn.

I'm a big believer in writing to companies when they do something right AND when they do something wrong, or I have a problem with a product or whatever.  So, I wrote to Jolly Time popcorn telling them how much I appreciated a very positive customer service experience I had with them when my son had his garlic allergy (I kept meaning to write to them and I kept forgetting).  I thanked both the warehouse worker who looked at all the ingredient labels of source products for me and thanked the woman at the front desk who answered the phone and was super nice to me about the entire thing.  Since then we have been very loyal Jolly Time popcorn users around here (well, that and they are actually pretty allergy friendly.  Their plain popcorn is produced in a factory with plain popcorn...that's IT, so it's awesome for anyone not allergic to...well corn).

As a thank you for being a loyal Jolly Time consumer (and I'm sure for giving a pat on the back to people who definitely deserved it) they sent me a couple of coupons for their popcorn and are sending us a book on their company history when it comes off the presses, which we're looking forward to.  My son loves the "Blast O' Butter" microwave popcorn and hasn't had it in a long time due to money, so I've been carefully rationing out the three bags for him over the course of the week (I know it sounds like a lot, but popcorn is one of a few things he'll actually eat).

I made sure to get the popcorn on a Saturday as well, so I could take advantage of the double fuel points on the weekends at Fred Meyer with my E-Coupon right now.

5.  I cooked our meals at home, which saved us some money.

6.  I've been sick with a terrible cold this week (no energy what so ever), so I slacked a bit when it came to using the dishwasher, unfortunately.  Sometimes you just have to cut yourself some slack and use a time saving appliance.  I was careful to scrape the dishes well before putting them in the dishwasher, though, so I wasn't forced to rewash some dishes that were still dirty. 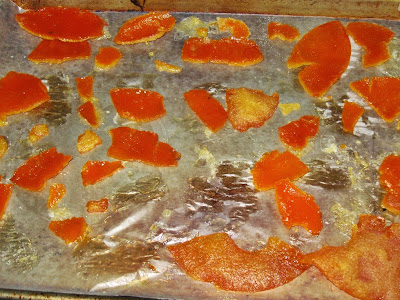 7.  I tried my hand at making candied peel.  My daughter is into a loving oranges phase (not a bad thing by any stretch of the imagination) and I didn't really want to throw away perfectly good peel (I know, I'm pathetic).  I have plenty of cleaners and am being careful with my vinegar, so I didn't really want to make citrus vinegar with the peels, so instead I just saved them up in a bag in the fridge and turned them into candied peel.

It took a while for the peels to dry out (I just dried them on my counter) after I'd dipped the final peels in sugar, but they actually came out really good and now I have a container of candied peel to use in cakes and other applications (or to snack on with a cup of tea, which I may or may not have done a few times ;).

8.  I used the free evaporated milk I got at a yard sale a week or so ago to make a rationing recipe for a gypsy tart (with some tweaks as I made a boo boo, but it worked out well :).  I'll share the recipe as soon as I'm sure the two tarts I made came out BOTH tasting good as I made one to see how well they'd freeze.

9.  My daughter had a field trip for school that was going to require a 4.00 cost.  I dug out quarters from our spare change and while at the bank exchanged it for dollar bills to put in the envelope for her field trip (I just always feel akward sticking change into a field trip envelope).

10.  I got my Freebie Friday score from last week at Fred Meyer when I got the free popcorn and quickly spirited it away into the closet into the stocking stuffer drawer for my daughter after confirming online that the candy was made in a peanut free facility.

And there you go folks.  Some of the ways I saved money this week.  How did you do?
Posted by Erika, "The Make Do Homemaker" at 7:02 PM