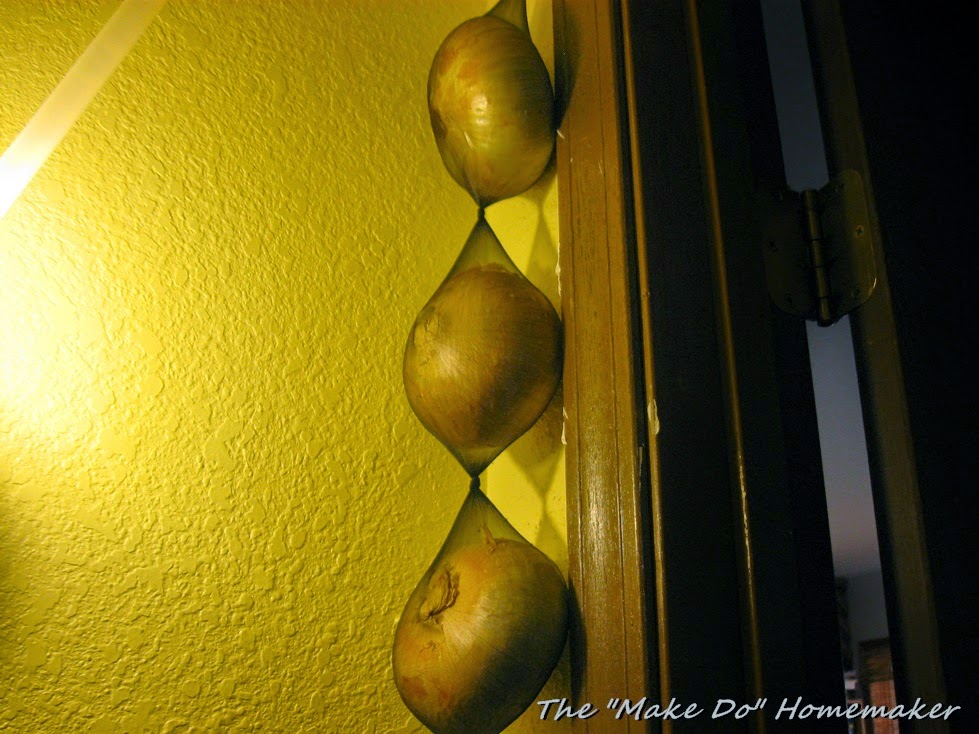 Right, so this hack test took a while, mainly because I wanted to test some longer term storage solutions/hacks for vegetables.

So, today the hacks/tricks that I tested out were...


I put to the test a trick that my culinary mentor, Alton Brown, proposed on his old show "Good Eats", which was if you store onions in a pantyhose they'll last for months without spoiling.  Well, I had done this with much smaller amounts of onions in my old house, but they were out in the air and while they lasted okay, but I wanted to actually do the deed right, which meant storing the onions somewhere dry and dark while in the pantyhose. I took some old running pantyhose and put some precious sweet onions I'd gotten at Costco in the pantyhose and hung it up in my pantry to see how they'd fair.  For contrast I stored some onions (same type) at the same time in an open basket in my kitchen (exposed to light, etc) and waited to see what happened.

Well, I quickly realized the disadvantage of the pantyhose trick/hack.  Once you put five big onions in a leg of pantyhose...it takes quite a meaty nail going into solid wood to hang those suckers or you are going to have onions falling very quickly.   And trying to find somewhere to hang them isn't easy if you have a pantry like mine which is located under the staircase.

Then you have this problem: 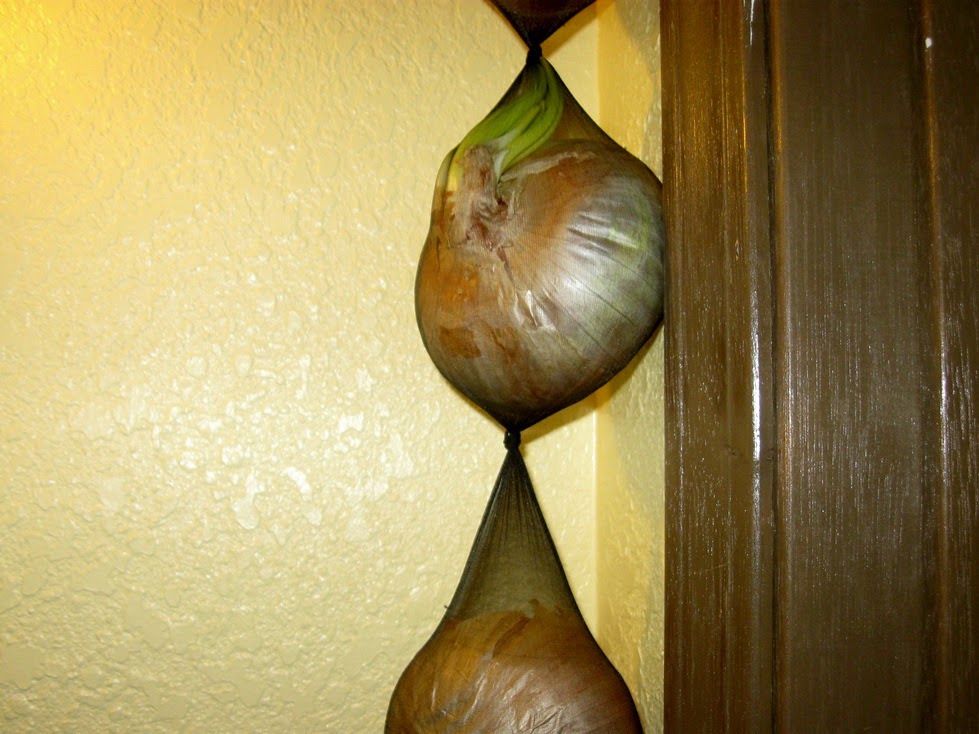 I had two onions sprout on me out of five and the one seen here was in pretty short order.  They were also in the middle of the onion "chain", so I had a problem on my hands.  I ended up having to cut the chain in half the first time to get the sprouting onion out and the second one I ended up having to take the onions down because it was just so far up the chain it wasn't worth trying to keep the chain in tact. The second onion is HUGE plant-wise, so I'm just going to plant it and see if I can at least get green onions during the summer out of it.  Here's hoping.

But, anyway, the onions in the kitchen actually fared pretty well in comparison.  I had one onion sprout and develop soft spots but it took a while.  Otherwise the onions did find just parked in a basket in the corner of my kitchen.  AND I actually saw them day in and day out, so I was much more likely to use them up in comparison to the pantyhose onions (which is exactly what happened actually...the kitchen onions have been gone for like a month now).

So, I can't really say if the pantyhose gave me an extra month of life on the onions or not, but considering how much you have to go through to do the pantyhose trick...honestly I don't think it's worth it.

Now mind you, I am in a relatively dry home in a pretty dry climate.  This trick might work fabulously in a high humid climate where you have to worry about rotting veggies more than I do up here in Alaska.  So, if you want, give it a try in your climate and see what happens.  Me?  I'll stick with the kitchen basket, and the freezer when the onions start sprouting.

Next up I tested a few more "storage solutions" for veggies.  I'm just going to give synopsis and if they worked or not.


1.  Carrots stored in sand in the fridge will last longer than storing them in your veggie drawer.

Nope.  Didn't work a lick for me compared to just storing them in the drawer.  But, I have a humidity control on my veggie drawer, so that might help.   This probably works better in root cellars and such with a more "earth" type of temp to it maybe, but I didn't notice any difference in lifespan of my carrots doing it.  And it was a huge pain in the keester finding room for a container with sand it in just for carrots in my fridge.


2.  An apple stored with potatoes will stop them from sprouting.

Totally didn't work for me.  At all.  I did the experiment with russets.  Didn't stop them from sprouting in about a week and if anything I think the apple helped some of them to actually go mushy.  Not doing that again.

So, there you are folks.  Some hacks I tested out and the results.  Do with them what you will.